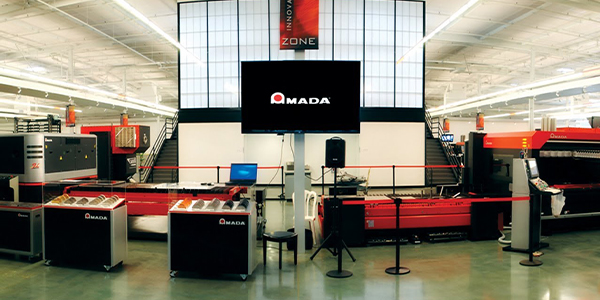 Amada America, an industry leader in the production of metalworking tools, has seen a lot of American industrial jobs go overseas in the last few years, but it’s trying to do everything it can to make U.S. industry operate more efficiently and remain competitive as a result. “When you have machines that can be automatically setup for a particular job, then the lot size becomes insignificant,” said Jerry Rush, the vice president of the California-based company. “Traditionally it has been difficult to make a profit on small lot production, but many of the large production jobs have been moved offshore. So small lot production is what our customers are seeing more of these days. Companies in the U.S. really need to look at their whole business differently, and learn how to produce small lots profitably.”

Rush explained that Amada America can help its customers increase their ability to profitably produce in small lots by offering flexible automation. “We have a product called Doctor Abe – a software product – that allows our customers to download CAD files in batches. Bending programs are then automatically created and machine setups determined. Similar parts are grouped together for processing,” he explained. ” Dr. Abe tells the operator what tools he needs, and where they need to be located in the machine.” Using research and development pioneered at the offices of its parent company back in Japan, Amada America remains at the cutting edge of the metal working industry – sometimes literally. The company, which is based in Buena Park in Southern California, uses robots, lasers, turret punching machines, and state-of-the-art software to speed the metalworking process beyond what once seemed possible.

A Seattle invention
Amada is a well-known name in Japan, dating back to the nation’s rebirth in 1946; the company’s roots here in America go back to 1971, when the Japanese owners of the firm went to Seattle to open up a research and development facility.

Within a few short years, Amada’s Seattle office was paying dividends. Researchers there created the first-ever computer-controlled, triple track turret punch press, which dramatically increased the number of tools stored in the machine. This innovation effectively doubled tool capacity over that which was then currently available. The benefit of the extra tool capacity was a drastic reduction in the time needed to setup for new jobs. “So with the goal of designing an all new turret punch press accomplished, the company moved from being just a research and development company to a sales company” in North America, Rush explained. Today, in addition to turret punch presses the company has a large offering of metal working machines, from spot welders to laser processing machines and almost everything in between.”

Last year we began marketing the third generation of the turret punch press originally designed in Seattle 34 years ago. Rush said that the current model offers a new ram design that is driven by twin AC servomotors. It replaces the second-generation drive system, which used hydraulic motors and pumps to actuate the tools. He said that the new technology’s “advantage is that it is faster, more accurate, and consumes less energy.” Rush said that because of the specialized nature of its equipment, the biggest customer group for Amada America remains precision fabrication job shops that receive subcontract work from original equipment manufacturers (OEMs). Beyond that, Amada America sells product directly to customer groups that include appliance manufacturers, makers of restaurant equipment, food service firms, computer and related electronics companies, firms involved in aerospace, construction equipment, and telecommunications.

Listening to the customer
Currently, the firm has some 330 people working in the United States, said Rush. Approximately half of the employees are located at the corporate offices in Buena Park, where Amada America also has a manufacturing operation. The company also operates sales and service centers throughout the United States. Rush said that the company’s goals are “to design and build equipment that can run 24 hours a day seven days a week. To accomplish this we need to automate the processes of setup, material handling, and information flow as well as design machines that are reliable enough to run around the clock. Many of these new designs come about, he said, after meeting with customers to get their feedback.”

One area in which Amada America is developing state-of-the-art products is with lasers; here, Rush said, the company has begun producing a new machine that uses linear motor drive technology to position the laser processing head over the material to be processed. Linear motors improve cutting speed and reduce the time to process parts.

Many of the improvements in the company’s new generation of equipment involves new developments in control technology and CAD/CAM software. “This is software that makes decisions automatically for the operator and proves out those decisions with computer simulations. The result is faster, more accurate setups with far less labor required,” Rush explained. “It gets the machine running more hours per shift and more shifts per day. Speed is certainly important with today’s machines but what is more important is how many hours a day and how many days a year our customers can keep their machines running.

Amada America is introducing a bending robot next month with an automatic tool changer, Rush added, which he said runs 24/7 and is equivalent in productivity to three to four conventional press brakes, depending on the specific application. This new bending robot will ease a company’s requirements for hard-to-find bending operators and slash per part cost. “That’s important, because officials at Amada America think that reducing production costs – especially in small lot sizes – is what is critical to keeping American jobs from migrating overseas. “The companies that are doing well are the ones that focus on parts and assemblies that cannot be done economically offshore. Large, bulky, heavy products continue to be manufactured in here. Production characterized by small lots, short lead times, and high quality continues to thrive in the U.S. because this cannot be done practically overseas,” Rush said.

Indeed, Amada America – born with a combination of Japanese enterprise and American know-how – is working hard to make sure that nobody can play catch-up.