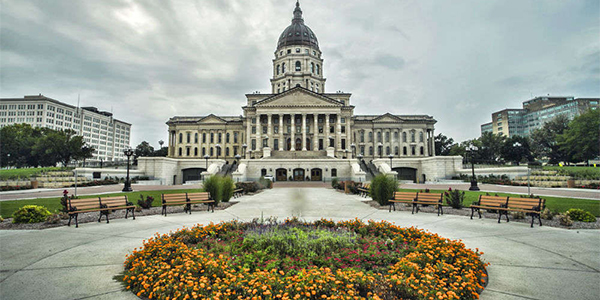 “There are a lot of good things occurring here in order for this area to be more competitive – we are assembling resources and the attitude to be a national competitor,” stresses Douglas S. Kinsinger, CCE, President and CEO, Greater Topeka Chamber of Commerce/GO Topeka.

By all accounts, Topeka, Kan. is well on its way to achieving that competitive edge, with economic growth initiatives in place that already have delivered substantial revenues that have led to across-the-board economic expansion.

One of these initiatives was the passing in 2002 of a local option sales tax for economic development within surrounding Shawnee County. In effect for four years, the tax acted to generate $4.8 million a year in economic development. “This is unique in the Midwest,” Kinsinger adds. “There are few communities that have passed this tax.” Placed back on the ballot in 2004, the now 1/2-cent tax is extended for a 12-year period, expected to generate $5 million in revenue.

“I feel it’s the best example in the nation, it’s set up where there’s not a lot of bureaucracy,” Kinsinger adds, explaining the administering entity, GO Topeka, the economic development arm of the Greater Topeka Chamber of Commerce, maintains the ability to acquire land and improve utilities and assist in relocation. Kinsinger is confident when he adds: “We’re on top of a pot of gold.”

It is just one of the many ways in which Topeka has been able to maintain a steady pace in the fast lane, in the face of sweeping changes both nationally and globally that have forced action in countless other regions that are suddenly competing for a bigger slice of the pie. For Topeka, Kinsinger explains, just getting out the word about where it is and its easy accessibility to transportation and metropolitan networks has surprised those who would have bypassed the area for seemingly more fertile economic ground.

The area grew up as the railroad capital of the Midwest; legend has it that a bored Cyrus K. Holliday, who served in the state senate and reportedly was wearied by a long-winded debate, began daydreaming about a plan to benefit Topeka. He wrote out the charter for a railroad, introduced it that same day, and a decade later staged the groundbreaking of the Santa Fe Railroad. Since its merge with Burlington Northern in 1995, the railroad has proven to be a vital contributor to Topeka’s economy. Today the city bills itself as being a prime Midwest location, with easy access to all-important points of commerce.
“We try to position ourselves as an outlying satellite to Kansas City; we’re one hour west of the Kansas City (International) Airport – we’re as close to the airport as many suburbs of Kansas City,” Kinsinger adds.

Having such easy user-friendliness makes the area very cost competitive. “People think we don’t have a diverse economy but we have a good collection of manufacturing and corporate offices,” Kinsinger says. “We have been assembling and identifying sites of up to hundreds of acres – that’s part of our strength. In Topeka we have cooperation from government units and business leaders. We decided we wanted growth and progress and we all pulled together.”

Right on target
Among those who have become the major contributors to Topeka’s economy is the Target retail chain. “A few years ago Target was looking for a new distribution location of 1.4 million square feet and required at least a 145-acre site,” Kinsinger recalls. “We pulled together 600 acres of property; they started construction and opened a year later.” The center, located in Topeka’s Central Crossing Commerce Park, will hold close to 1,000 employees when at full capacity. “This project was done in an extremely fast time frame with permits and zoning – they started building on the site before the transferring of property – that’s the level of confidence they had in us,” he stresses.

Another company that has invested heavily in Topeka is Hill’s Pet Nutrition, which spent more than $30 million to expand its Topeka corporate headquarters and research facilities toward the goal of bringing the company closer to new applications in nutritional science. Headquartered in Topeka since 1906, Hill’s Pet Nutrition is a subsidiary of the Colgate-Palmolive Company and manufactures Prescription Diet® brand pet foods and Science Diet® brand pet foods sold through veterinarians, pet specialty stores and breeders.

At the time of the announcement Bob Wheeler, Hill’s chief executive officer, said, “We look at this investment as a continued commitment to our ongoing growth and success as a business, while keeping our strong presence in the Topeka community.” Through this investment Wheeler anticipates Hill’s will provide job opportunities with an average annual wage in excess of $50,000.

It’s been a good year
One of Topeka’s biggest success stories, however, revolved around Goodyear, which occupied what was initially a plant built as a government facility; says Kinsinger, when Goodyear took over demand for what it produced there had waned. “We realized they hadn’t made any significant capital investment to modernize or update,” recalls Kinsinger, who feared the three-million-square-foot plant could potentially shut down, resulting in a substantial job loss that could cut into Topeka’s economy. “We met with plant management and realized the company was making an investment for two new lines: a two-piece earthmover tire for heavy-duty off-road use, which amounted to a new technological advancement. It was also growing its radial truck line.

We helped to put together an incentive package with heavy support from the state government.”

Topeka, he added, knew it was in competition for Goodyear’s business with sites in Canada, Europe and other U.S. locations as well as Brazil. But the $25 million incentive package helped to seal the deal, and keep Goodyear humming in Topeka. With 1,600 employees, the facility is now Topeka’s largest employer.

Notes Goodyear Communications Manager Lisa Spangler: “Both the state and city made efforts to secure Goodyear as an employer of choice. We’re very excited because there’s great potential here. The demand is incredible – everything we’ve made now is sold.”

Spangler points to the proximity of universities – including Kansas State, Washburn and Kansas University, amounting to more than 60,000 college students within an hour’s drive – as a boon not only to Goodyear but also to the entire region and places Topeka in the center of a higher education belt.

Also making the area desirable, Kinsinger adds, is the fact that the cost of living is 80 percent lower than the national average; in addition, Topeka has witnessed its highest appreciation in real estate in the last few years, ranked with Washington D.C. and San Francisco by the National Board of Realtors. “There’s no crime, no traffic and easy accessibility to recreation and sports,” he adds, noting the Kansas City Speedway, a multi-purpose racing facility just selected for Sportscar of Americas Club and National Championship Runoffs.

In addition, says Spangler, Topeka is a place that has a lot going for it in terms of character and diversity; offering the best of both worlds. “We’re very fortunate here,” she stresses. “This area has a lot of big city opportunities but it retains its small community character.”