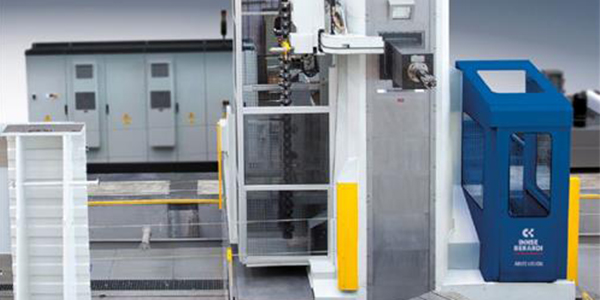 Transportation. Aerospace. Construction. Agriculture. Power generation. Primary metals. In heavy industries worldwide, The Ingersoll Milling Machine Company’s special machines and cutting tools are at work making important products from cast iron and steel, from aluminum and titanium, and from advanced composites. Ingersoll’s machines are as varied as the industries they serve, ranging from automated transfer lines that produce hundreds of auto engine parts each hour to giant, special-purpose machines that take hours to produce a single tractor part, to composite forming systems that fabricate “skins” automatically.

All Ingersoll companies sell worldwide. Combined annual shipments exceed $500 million. Total employment is more than 4,000 workers. “Engineering and building machines that help our customers make better products is what Ingersoll is all about, and we’ve been doing it for more than a century,” says Tom Shifo, president. “It begins with a willingness to join with our customers in the advance planning needed to challenge tradition in favor of bold new strategies. It results in the engineering and the building of new machinery and new processes that help Ingersoll customers differentiate themselves from their competitors.”

In an age of miniaturization and microelectronics, The Ingersoll Milling Machine Company is distinguished, among other things, for the big scale of its products.

In the 1970s, for example, Ingersoll supplied the most extensive complete machining system ever for a customer in Europe to automate the production of diesel engines used in heavy trucks. At about the same time, a huge,numerically controlled machining center was supplied for use in the construction of nuclear power plants. At the time, this was the biggest machine tool in the world, standing 60 feet high and weighing 600 tons.

The largest CNC machining center ever built, a gantry-type adjustable rail, was shipped from Ingersoll in the early 1990s to Argentina. It has a 33-foot diameter rotary table and can accommodate work pieces as large as 500 tons. Today, Ingersoll is installing a large, five-axis High Velocity® Profiler for an aerospace customer. It stands three stories tall, weighs 4 million pounds and will machine wing spars up to 20 meters long.

“Bigness is not an end in itself. However, it is a byproduct of Ingersoll’s approach to a job, an attitude of taking a customer’s problem and finding a complete, comprehensive solution to it,” says Shifo. Ingersoll is also distinguished for having uninterrupted service since 1887. The company has carried on through depressions and recessions without labor unrest, changing and broadening its product lines to adapt to the needs of the world marketplace.

All of Ingersoll’s resources are dedicated to the improved production of metal parts or their substitutes, regardless of volume requirement or work piece size. The company has made significant investments in people and equipment to take advantage of new technology as soon as it can be practically applied to the improvement of its customers’ manufacturing capabilities. “High Velocity® technology – which combines high acceleration/ deceleration of linear axes, high speed/high power spindles and the dynamic stability of the machine structure – was developed first by Ingersoll over a 10-year period. This new technology is now at work on our customers’ shop floors,” says Shifo.

CAD/CAM workstations have altogether replaced drawing boards to unite the computerized design of Ingersoll’s parts with the numerically controlled machines that make them.

A computer-integrated manufacturing system drives entire shop schedules and gives Ingersoll precise control over the most critical processes in the manufacture of its products.

Engineers use advanced computer tools like solids modeling and finite-element analysis to optimize designs and determine in advance how parts will react to manufacturing stress. Also, Ingersoll uses computers to simulate and evaluate machine and system design alternatives. These and other new analytical tools play a key role in successful simultaneous engineering projects — joint efforts with customers to optimize product and process designs and significantly reduce overall lead times and cost for new machinery.

“New technologies are the cornerstone of the machines we build,” says Shifo. “Our customers demand efficiency, flexibility and increased productivity.”

With a passion for solving customers’ tough manufacturing problems, Ingersoll thrives on innovation. It is a leader in the development of advanced new manufacturing technology: High Velocity® Machines for automotive suppliers; state-of-the-art aerospace machines like the Stitching Machine and Stringer Drill; and transferline standards for automobile builders.

“Our 1 million-square-foot manufacturing/assembly floors are among the best machine-building facilities in the world,” says Shifo. “And our development center exists solely for the testing of advanced technologies, turning theory into practice.” Close academic affiliations with area universities stimulate new ideas and help put Ingersoll people at the forefront of the latest science and engineering breakthroughs. The result is the creation of one-of-a-kind machines capable of performing in ways not possible before.

At Ingersoll, the pursuit of quality is companywide and continuous. After achieving ISO 9001 registration in 1997, Ingersoll went on to obtain QS 9000/TE certification recently. “Nearly all of our employees participated in these efforts in some way —through awareness training, the development and implementation of new procedures and work instructions or revisions to quality documentation,” says Shifo.

In order to meet today’s exacting tolerance requirements, Ingersoll has made substantial investments in controlling the climates on its manufacturing and assembly floors. Constant temperature is maintained year-round. Critical tolerances on all individual components, subassemblies and customer runoff parts are verified with CNC coordinate measuring machines. Sophisticated checkout stands are used to pretest precision spindle drive systems. Clean rooms are used for all close tolerance subassembly work to protect against contamination by even the smallest of airborne particles.

“Our people, our greatest resource, are committed to getting it right the first time and on time,” says Shifo. “Throughout our century-long history, we have introduced many new technologies and industry standards that advance the manufacturing capabilities of our customers in all parts of the world.”