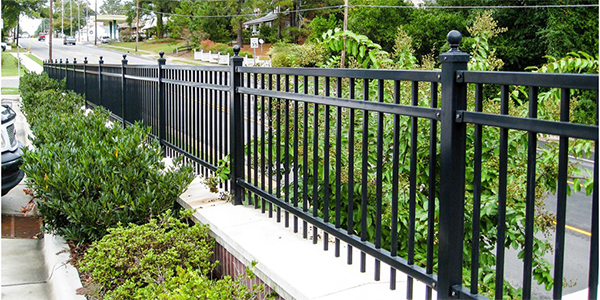 This company is on a mission. Since its inception 19 years ago, Ameristar Fence Products, Inc., has continually led the fencing industry to ever-advancing levels through the visionary guidance of its founder, President and Chief Executive Officer Eddy Gibbs. Today, in the brave new world of international security, Ameristar is on yet another mission: to engineer and manufacture the next generation of ultra-high-security fencing.

It is through no stroke of luck that Ameristar quickly achieved the status of the world’s largest manufacturer of proprietary fence products. “The key to our success is the vision of Eddy Gibbs, who is able to anticipate trends and consumer needs before others in the industry,” says Mark Meek, national sales and marketing manager of the Tulsa, Okla.-based company. This vision, coupled with a dedicated work force, is the essence of success. In the words of Gibbs, “Ameristar’s greatest asset is our people, whom we empower to do their jobs.”

When Gibbs first entered the industry, people who wanted fencing had only two choices: wood or chain link. Expensive wrought iron was an option reserved almost exclusively for the rich and famous. Gibbs changed all of that very fast. Today, ordinary, not-so-rich-and-famous people can afford Ameristar ornamental fences without having to consider taking a second mortgage to pay for it.

Although they might not realize it, just about everyone in the country sees or passes through an Ameristar fence every day. Ameristar fencing protects Lowe’s Home Improvement, Home Depot and more than 1,000 Wal-Mart stores, as well as corporate headquarters and facilities such as those of AT&T, Coca-Cola, Hershey, Frito-Lay and General Motors. Major airports, universities, housing authorities, courthouses, police stations, churches and hospitals also appear on Ameristar’s list of customers. Another segment of the business comprises government and military facilities such as post offices; border stations; Navy, Air Force, Marine and Army bases; NASA; Cape Kennedy; the IRS; embassies; and veterans’ cemeteries.

Ameristar’s No. 1 product line is ornamental steel fencing, available in heights ranging from 4 to 10 feet, in three grades. Heavy-duty fencing is used primarily in industrial applications, medium-weight in commercial settings and lighter-weight primarily in residential settings. “Our fences can be made as fancy as the customer desires by using adornments to posts or finials to the tops of pickets,” says Meek.

The fencing’s unique knocked-down system offers easy installation. Ameristar uses through-punched rails supported by rods. “These products will not rust because of the construction and the materials we use,” states Meek. He adds that Ameristar is only one of two U.S. companies applying a two-part coating to the fencing material. “Unlike welded products that come in big sections and sustain a lot of damage in shipment, our fencing is very easy to work with,” Meek says. Ameristar’s products come with a 10-year warranty, which is unheard of in the industry. Commenting on that warranty, Meek explains, “This is because of our Permacoat® powder-coating system.” Gibbs was the first in the industry to develop the idea of applying powder coating to these products.

Starting with pregalvanized steel, Ameristar fencing material passes through a six-stage, 700 foot-long powder-coating line that electrostatically applies a base coat of epoxy over the pre-galvanized base material. A polyester coat is then applied over the epoxy. “Most of our competitors don’t use pregalvanized steel – they use regular black steel and put only one coat of paint over it. They don’t warranty it because they know it will rust,” Meek says.

In-house machining and metal-working operations include roll-forming systems capable of producing special proprietary shapes and equipment capable of manufacturing a variety of piping and tubing.

Security Matters
Since the Sept. 11 attacks, the company is focused on providing higher levels of security in its fencing. One of the most advanced security fences on the market today is Ameristar’s heavy-duty ornamental-steel picket fence system, made with a specially formed rail that maximizes strength and makes all attachments internal – safe from intruder attempts at circumvention, disconnection or destruction. The optional addition of steel cables creates a virtually impregnable barrier against vehicular crash attempts.

“These fences can resist the impact of a truck colliding at a velocity of 50 miles per hour, because, to defeat the cable-reinforced fence, a vehicle would have to pull down the entire fence-and-cable system, and that would bring the intruding vehicle to an imminent halt,” explains Meek.

In other, less security-conscious venues, ordinary people continue to want to use ornamental fencing for everyday use. It is this sector of the company’s business that promises the most future growth, and it is also the market that continues to grow substantially. “A lot of this growth is due to baby boomers moving to areas near golf courses or green belts,” says Meek. “They want fencing that will allow them to enjoy the view beyond the fence.”

Meek says that the market for wood fencing is not growing because of the maintenance factor, and the interest in chain link fencing continues to drop significantly. However, he notes that colored chain link is showing signs of growth, especially when combined in applications where customers choose ornamental fences for areas of high vision. These customers, who desire cost-effective fencing solutions, choose to fence less visible areas with Permacoat®-colored chain link, which blends in nicely with the ambient foliage.

Setting Ameristar apart from its competitors is its ability to be the only manufacturer of ornamental fencing that can produce entire fencing systems, from coiled steel to the finished product. This capability enables the company to have complete control over quality. “Our products have the best quality in the industry, yet are priced competitively due to our volume and efficiency,” states Meek.

Ameristar executives are quick to credit the employees for the company’s success. “Teamwork is very important to our employees because we offer a compensation program that starts with a good salary and benefits,” says Meek. “Added to that, every employee in the company is on a bonus program that’s based on the productivity of their particular department or on the overall growth of the business. So slackers are not tolerated by the teams.” Employees can increase their incomes from 10 to 30 percent – so the Ameristar work force certainly is motivated to succeed.

Looking toward the future, Ameristar plans to increase its 2002 revenues to $100 million from $75 million in 2001. The company plans to work aggressively over the next few months to increase the strength and security of its industrial products, and expects to launch an innovative high-security fence system. This innovative system will be difficult to climb over or cut through. The new fence will be marketed in high-security applications for the government, military, and municipal and energy applications, including nuclear plants, refineries, water supplies and munitions storage facilities. “Our goal is to be the world’s largest supplier of fencing systems in the industry,” concludes Meek.