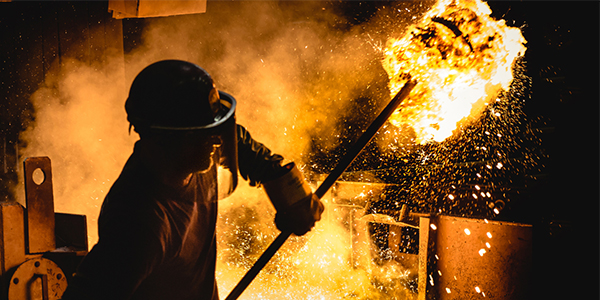 The past 50 years have seen dramatic changes in the nation’s economy, and weathering the stormy uncertainties of growing a business in the heart of rural Pennsylvania has been no small feat. Buck Company, Inc., however, has done it while holding true to a simple philosophy. To achieve steady and honest growth, quality craftsmanship and flexibility are infinitely more important than rapid expansion.

Buck Company was started in the late 1940s, and was bought by a company called DVCC in 1951. It has been under DVCC’s ownership ever since. Buck’s core business is producing castings. “We make sand castings to customer specifications and to their engineering prints,” says the company’s president, Dick McMinn. “We don’t spec anything.”

From the castings, which are fabricated on site, Buck’s 350 employees make a variety of one-stop-shop products, including castings for steering housings as well as products used in mining, oilfields, railroads and the agriculture industry.

Showing Its Metal
“We’re a jobbing shop,” says McMinn. “We use malleable iron, ductile iron and gray irons, as well as several grades of aluminum and 13 different grades of brass and bronze.” Buck services approximately 400 customers, making anything from safety-related parts to ornamental parts, such as decorative fencing. Notably, the company makes automotive steering housings for Delphi, hose couplings and a variety of products used in agriculture – including some found on the neighboring Amish farms.

The company’s 220,000 square-foot facility is located on a 54-acre site that includes a certified ferrous foundry. Here, the company makes malleable iron (ferritic and pearlitic grades), ductile iron (grades D4018, D4512, D5506, D7003 and ADI), and gray irons (classes 30, 35 and 25). It also produces aluminum (A356 primary and secondary, 319 secondary and ALMAG) as well as the many different grades of brass and bronze mentioned previously.

Modern to the Core
Its up-to-date core-producing equipment enables Buck to provide the most economical designs and applications. Its automatic molding machines produce the constituency and repeatability needed to meet customers’ requirements. Electric melting, says McMinn, affords an exact control method in producing metal to customer specifications, and the in-house metallurgical laboratory monitors each melt to ensure consistency. “All of our metals can be certified if required,” he says.

To create the molds used in fabrication, the company employs seven pattern makers in a full-service, in-house pattern shop. Aluminum or urethane patterns are necessary to withstand the company’s automatic molding machines. But many existing patterns are adapted inexpensively using this on-site facility, according to McMinn.

All of Buck’s castings are processed and visually inspected prior to final quality-control review at shipping. “We also have the capability of turnkey,” says McMinn. “We will make it, machine it and either plate it or paint it.” These secondary operations provide Buck’s customers with the added value they have come to expect.

Automatic Future
“We’ve grown at a slow pace over the years,” says McMinn, “It’s been a steady growth until the early 1990s, and then we grew a little more rapidly.” With a sharp increase in the demand, Buck spent much of the last decade making major investments in automated equipment for the future.

“We made capital investments in automatic molding machines in 1994, 1995, 1996, 1998 and 1999, and in core equipment in 1995 and 1996,” McMinn says. “Then we bought an automatic grinding center in the year 2000.” Looking to the new millennium with the same philosophy that has seen this company through the economy’s many ups and downs over the past half century, Buck is poised for continued growth.

“We are not heavily into any one industry, and we’re fortunate that way,” says McMinn. “We serve such a large customer base that if one industry goes down we’re okay.” Buck’s versatility, therefore, has molded this company into a consistent success.