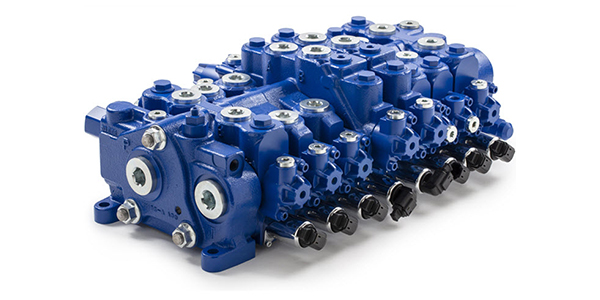 If it moves, there is a good chance there is a HUSCO product inside. The Waukesha, Wis.-based manufacturer has established global leadership in the field of hydraulic and electrohydraulic controls for off-highway applications. Off-highway markets are HUSCO’s roots; however, HUSCO has also successfully ventured into automotive markets, making electrohydraulic ride control systems and engine management controls.

HUSCO’s commitment to quality products comes through on its company video. “There’s something timeless about fine machine work,” says the video’s narrator. “Fifty years of doing one thing so well. Today, we can honestly say, HUSCO has established leadership in virtually every market we choose to serve.”

Accumulating these high-profile customers was the result of a strategy developed and implemented by Gus Ramirez, who has been HUSCO’s chairman, chief executive officer and principal shareholder since 1985. Ramirez said HUSCO has grown over 700 percent since the buyout and 500 percent since 1991, making it the fastest-growing, major manufacturer in the hydraulic/fluid power industry.

The company is now 54 years old, and began “with a drill press and a dream.” Dana Schneider founded HUSCO in 1946 by setting up a drill press in his garage in Painesville, Ohio, and began producing hydraulic power units. By the time Schneider sold HUSCO to Koehring Company in 1968, his one-man, one-machine operation had become an established manufacturer in Waukesha, Wis. With customers both in the United States and abroad, and a licensee, Kayaba, in Japan, HUSCO set many milestones including its first $1 million monthly shipment in 1973; its first European office in the United Kingdom in 1977; and annual sales of more than $30 million in 1979 (the year founder Schneider died). The following year, Canada-based AMCA International bought Koehring.

Ramirez led HUSCO’s strategic planning process in 1983, and two years later he put together the management group that purchased HUSCO from AMCA. In 1985 HUSCO was once again independent! The Ramirez Era has been one of spectacular growth in terms of sales, customers, global reach, and product and market diversification.

Success has been due to a “constancy of purpose and values,” as expressed in the company’s mission statement. HUSCO’s goal, says the statement, is to attain global market, product and quality leadership. This is accomplished by providing the highest-quality products and services; by making customers’ machines perform better through custom designs; by investing in cost-effective manufacturing; by using facilities, licensees and affiliates in major markets to deliver highly responsive support and service; by developing the most capable organization in the industry; and by providing an environment that encourages open communications, personal growth, teamwork, employee education and creativity.

Rich Robertson, HUSCO’s vice president of sales and marketing, expresses HUSCO’s philosophy under Ramirez in this way: “We’ve taken a ‘niche’ strategy and leveraged it into very high growth through an expanded customer and geographic base. When the management buyout occurred, we focused marketing efforts on industry leaders in selected markets and developed close working relationships with those customers. With superior financial results and increased market penetration, HUSCO developed the manufacturing and engineering capabilities to expand its customer base in related markets. HUSCO continues to expand its served markets within the broad category of mobile equipment which HUSCO defines as “equipment that moves and is not plugged into an electric outlet.” “We’re now in 35 to 40 distinct market segments in this industry,” according to Robertson.

The commitment to provide superior performance is obvious when looking at HUSCO’s products. Typical of HUSCO’s sophisticated control systems are control valve assemblies for John Deere 6000, 7000, 8000 and 9000 Series agricultural tractors. These vary from high-performance manual valves to full electrohydraulic functions. Functions provided include: priority inlets with first and second priority flows for steering, brakes and implement flows; manual sections with and without pressure compensation and adjustable flow controls; electrohydraulic draft control; full electrohydraulic sections with integral couplers. All functions within the valve stack are load sensing and can work with fixed-displacement or variable-volume pumps depending on inlet configuration. The various features can be mixed and matched in the valve stack to provide a complete assembly to meet the customers’ specific requirements.

HUSCO continues to challenge itself to do the near-impossible. A new electrohydraulic cartridge valve system incorporated in DaimlerChrysler’s top of the line Mercedes vehicles is a key component of the highly acclaimed Mercedes active body control (ABC) suspension system used in the CL and S Class vehicles. The specifications and commercial requirements for these valves could not be met by any European manufacturer. These specifications include a durability requirement of 100 million cycles and operation in temperatures as low as minus 40 degrees Centigrade. HUSCO’s winning this 10-year program is a testament to its superior technological and manufacturing capabilities. Major new automotive programs will be announced in the near future, according to Ramirez.

HUSCO continues to push the technology envelope with the launch of new products. HUSCO is now introducing new breakthrough products to meet electrohydraulic control requirements of the off-highway equipment market. These range from the inclusion of electronics to manage and control conventional valves to revolutionary new “poppet valves” which when combined with electronics will provide a distributed control system competitive economically with manual systems. Suspension systems for agricultural tractors and off-highway equipment are another area utilizing HUSCO’s knowledge of electrohydraulics and suspension system technology.

What’s keeping HUSCO at the forefront is its continuing investment in its manufacturing and R&D. Major facilities include its headquarters in Waukesha, Wis., its automotive facility in nearby Whitewater, Wis., and its European facility in Runcorn, England. In addition, there is a development facility near Hamburg, Germany, and a new facility under construction in Shanghai, China. Its Kayaba Japanese licensee, first established in 1967, is the market leader in Japan. In 1997, HUSCO purchased land for the new plant in Shanghai – one of several moves it made that year to grow its manufacturing base including major plant expansions in Waukesha and Runcorn.

HUSCO continues to forge its technological leadership by spending three to four times the industry average in product development. These investments are key to maintaining the product superiority that drives HUSCO’s growth, according to Ramirez.

HUSCO’s aggressive growth, past, present and future, could not be accomplished without the support of key suppliers. HUSCO has employed close working relationships with certified suppliers of precision components for incorporation in the controls valves. As stated by Ron Erdmann, materials manager, “We could not be where we are without the collaboration of our key suppliers, which begins at the design phase and continues throughout the life of the product.”

The future will continue to be very exciting for HUSCO. “I expect HUSCO to be a billion- dollar manufacturer of controls for mobile equipment before I retire,” says the 53-year old Ramirez, “and I expect to retire before I am 65.” Automotive sales and new electrohydraulic products will drive growth, but HUSCO also expects its European sales to exceed its North American sales in time. When combined with efforts in developing markets in South America, Korea, China, and India, HUSCO expects the hectic pace since the buyout in 1985 to accelerate in the new millennium.