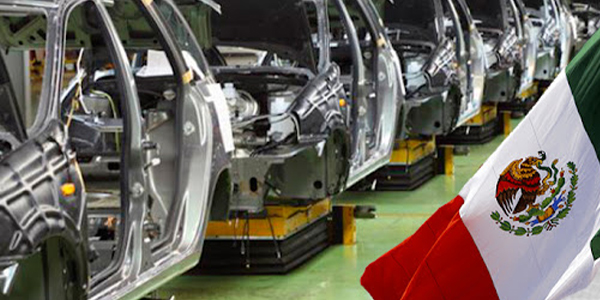 Industria Nacional de Autopartes, A.C., (INA), the association that addresses the manufacture of automotive parts in Mexico, oversees a vast network of automotive suppliers that has grown substantially in the last decade.

The industry is facing tremendous growth, which is mostly driven by opportunities to get into the U.S. market, to supply parts to assembly plants. The biggest growth areas include the manufacture and assembly of engines, electrical and electronic components.

As a thriving industry, automotive traces its roots in Mexico to the latter half of the 20th century, when vehicles were imported for the first time. Mexico imported complete knock down vehicles kits (CKDs) and soon after, the Mexican government realized the need to create an integrated vehicle & automotive parts manufacturing industry to balance the trade deficit that resulted as a consequence of the massive importation of vehicles.

In 1962, the Mexican government issued the first “Automotive Decree” to further investment and modernization in the auto industry. Years later, the government (and other entities in the newly formed industry) saw the possibility of exporting motors, parts, and vehicles. This situation served as a prelude to the creation of the Mexican automotive
market. Later, in 1994, Mexico was integrated into the NAFTA (North American Free Trade Agreement between Mexico, United States, and Canada) region. Currently, Mexico has safe and preferential access to the markets in 42 countries on three continents.

Soon after the Automotive Decree was issued, the pioneering industrialists of automotive parts recognized the necessity to create an institution that could give them visibility and that could voice their interests and perspectives with the Mexican government. The institution changed names on two occasions (National Association of Manufacturers of Automotive Products, or ANFPA, and Automotive Parts Manufacturers Association in Mexico – Industria Nacional de Autopartes – INA), but, under any designation, this institution remains as the official and the most respected voice of the automotive parts industry established in Mexico.

The industry in Mexico has really been growing over the last 20 years, although it had always been an internal market.

But after NAFTA it really started to grow outside of Mexico. And Mexico has been a large contributor to the sustained momentum in the North American auto industry. As a whole this industry is really only effective if economies are working in close proximity to a low cost producer. Mexico is an important player in the NAFTA region, being the only low cost manufacturer in the region. The industry has grown appreciably, close to 10 percent growth each year.

But the industry has also made its global mark; consider: The top 45 globally ranked parts suppliers are operating in Mexico, and of the top 50, 49 are in Mexico.

Established mission
Mexico has achieved much of its success through the establishment of INA, whose mission it is to represent the established industrial companies of automotive parts in Mexico, so they develop and grow in a competitive, integral, profitable and sustainable way. INA also coordinates and integrates with the different manufacturers, taking into consideration their concerns and proposals, and adopts a perspective that is consistent with the automotive system, region or market they serve.

INA’s membership represents 85 percent of total Mexican auto parts production. Its vision is to gain national and international recognition for being strategic and competitive. We want to be respected for our innovation and our flexible services according to the needs of the partners. We are capable of building strategic alliances that offer specific synergies.”