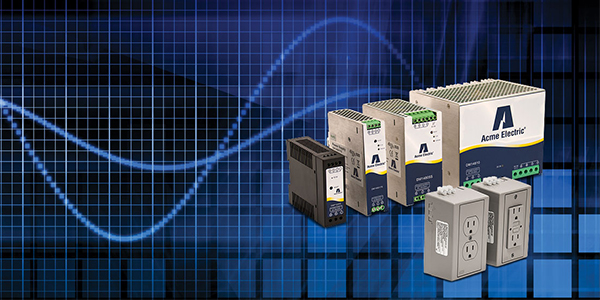 On the first day of summer in 1955 — a day hot enough to break weather records and to overheat the Ford Thunderbirds that had first hit the streets during the previous October — three men began a company that would make its own mark one day. William Townley, James Dick and Thomas Henehan founded Actown Electrocoil, Inc., which initially produced electrical coils for local transformer manufacturers when their workloads got too heavy. Actown was an overflow house, working with four or five Chicago-area companies. In a move toward greater independence and autonomy, the company retooled to produce fractional horsepower motors.

The product line has expanded since then, thanks in part to a successful 1996 merger with another coil maker, Industrial Coils in Baraboo, Wis. Their combined efforts now produce coils and transformers for neon signs, trolling motors, low-voltage outdoor lighting, ozone generators, insect killers, industrial controls, cellular base stations, cell phones, pagers and power conversion products. Much of the work the company does is custom; it works closely with the client in product design, testing and application.

Most of Actown’s work takes place at three locations. The Spring Grove, Ill., corporate headquarters houses the engineering, finance, sales and marketing functions along with production. The company also has plants in Baraboo and Juarez, Mexico; altogether, these plants measure 150,000 square feet in manufacturing space. Each plant has its own management and product engineering support. The Juarez facility is nearly brand new, having been completed three years ago, and has the potential to double in capacity. In addition, the Spring Grove facility added more than 4,000 square feet of office space to handle the expanding design engineering staff.

Actown markets its products in a variety of ways. The Actown sales force performs direct sales to original equipment manufacturers. Transformers that are used in the construction of neon signs are sold chiefly through distributors and manufacturers representatives. In addition, the company has a strong and continued presence at various sign product trade shows.

Technology ranks high on the ladder of importance at Actown. Each new design has the possibility of requiring new technology for quality on-time, under-budget production. Actown responds to the need. In 1997, for instance, the company developed and installed a fully automated chip inductor process capable of producing 600,000 units a week, using the skills of only four employees. Actown is also developing a new sign product line, magnetic ballasts for fluorescent lighting.

The commitment to technology involves a strong commitment to quality. Actown maintains an ongoing program of capital investment, which has brought in-line statistical process controls, computerized data collection and analysis, and innovative testing methods — all of which can be adapted to the customer’s unique requirements — to its production process. In addition, Actown uses electronic data interface to establish supplier partnerships, offering further advantages to the customer.

Beyond Its Borders
Actown has coupled its technology investments with responsive quality, service and international production capability to bring the company to the edge of the global market. As a client-oriented provider of products and services essential to many industries, Actown has found that its multinational customers demand regional production capabilities. The company now manufactures in North America, Central America and the Far East.

Actown’s 200-plus clients are located primarily in the United States, with a sprinkling in the Caribbean. Far East opportunities may prove to be the most dramatic in terms of growth. Already, Actown has begun a number of partnerships with contractors in Asian and Pacific Rim nations. Its close relationships with several companies in the Far East promise early fruit; these are companies that fit well with Actown in terms of capabilities and expertise.

Actown’s management believes that any company that wants to grow beyond its national borders has to understand what it means to be a global supplier both in the importing and exporting of products. The philosophy has paid off. Six years ago, annual revenues barely reached $13 million. In the year 2000, they topped $40 million. Part of it was because of production expansion — both Baraboo and Juarez date back only to the latter half of the last decade — but even without the expansion, the company would have more than doubled revenues because of strong, lasting relationships with quality customers. Actown has become an asset to these customers and the word gets out. Quality attracts quality.

“Pick your strengths and do them well,” the company leaders say. Actown practices what it preaches: Serve up quality to the clients from a strong technological standpoint; think globally; act locally. The company’s philosophy shows up in real numbers on its bottom line.