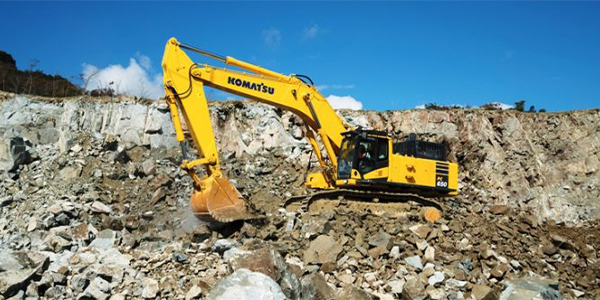 Komatsu America Corp., the U.S.-based arm of the Japanese construction and mining equipment giant, would like to be the leader in North America some day, but right now the company is setting its sights on the immediate goal of becoming number two.

“We are, today, the number three player, but our strategy is that in North America we need to be number two,” said Rod Schrader, the vice president for marketing of Komatsu. But the global leader in products such as hydraulic excavators, wheel loaders, crawler dozers, off-highway trucks and motor graders has a plan in place that is aimed at catching up to rivals Caterpillar and John Deere.

“We plan to provide more support capabilities to our distributors and to our customers,” Schrader said. “We want to continue to develop unrivalled proficiency in marketing and to meet or exceed the customer’s expectations, in fuel efficiency, operating costs and safety.”

In the last couple of years, Komatsu America has already made major moves in that direction, beginning in 2002 when it combined its North American operations into one streamlined unit, headquartered in Vernon Hills, Ill., outside of Chicago. The company has also reduced its domestic production costs while importing frames and other basic materials from abroad.

Japanese roots
The improvements are the latest step in a process that began over three decades ago, when Japan’s prospering Komatsu Ltd. looked to the North American market to grow the company. Created with the opening of the Komatsu Iron Works in Japan in 1917, the firm dominated the market in its native country for tractors and later for bulldozers as well.

The parent company created Komatsu America in February 1970. At first, the firm relied on the efficient factory-management techniques pioneered back home in Japan to be able to cut into the business of Caterpillar and John Deere by selling superior quality, high performing machines at value price levels.

Best-known at first for its crawler dozers, Komatsu America slowly expanded its product offerings to include excavators, wheel loaders, off-highway articulated dump trucks and the like. In 1988, Komatsu America moved into the mining equipment business in a big way after it formed a joint venture with an American company, Dresser Industries.

In the 1990s, Komatsu America developed the world’s largest dump truck, the 930E model, while it also moved into the area of smaller utility equipment such as mini-excavators, mini-wheel loaders and skid-steer loaders.

Plays in Peoria
The Komatsu Peoria Operation – in the backyard of its rival Caterpillar – designs and manufactures large off-highway trucks. In addition the Komatsu Mining Division is a leader in mine management systems through its ownership of Modular Mining Systems with products such as DISPATCH. The massive facility, which the company inherited when it linked up with Dresser Industries, has undergone millions of dollars in renovation and now measures 777,000 square feet.

The Newberry Manufacturing Operation is a 200,000-square-foot facility set on 80 acres just 35 miles northwest of Columbia, S.C. It is currently producing backhoe loaders for Canadian, U.S. and Latin American customers. In the future, it’s expected the plant will also produce skid steer loaders, compact excavators and wheel loaders, and telescopic handlers. In May, the company celebrated the production of the 1000th backhoe loader.

Komatsu America also has a remanufacturing facility in Lexington, Ken. Here, older bulldozers, tractors, and the like are overhauled with new engines and transmissions allowing customers to purchase like-new equipment at 60 percent of the cost.

The company’s new tracked bulldozers feature Komatsu’s hydrostatic steering system (HSS) that, according to the company, offers faster responses and quicker, more precise turning. An independent hydraulic pump powers the system, with engine power transmitted to both tracks. The outside track is allowed to move faster than the inside track for smooth, continuous turns. Komatsu says that, unlike competing units with conventional steering systems, HSS also allows counter-rotation of the tracks under certain circumstances.

Schrader said that the key to the company’s growth is what the company called “unrivalled products.” That means coming out with technological advances that the competition won’t be able to match for several years.

Komatsu’s new technology is speeding the arrival of driverless trucks that will dramatically reduce a mine-site’s personnel costs. “We are getting very close to marketing a product where you don’t have to have a driver,” he said. “We’ve got a couple of trucks at a proving ground in Tucson and coming soon – maybe six to nine months – at a mining site somewhere in the world.”

Schrader said that the recovery from the slowdown in the earlier part of the decade, which was particularly hard on the construction equipment industry, is now taking place more quickly than expected. He said that sales rose 10 percent in 2003 and were on pace to rise 30 to 40 percent in 2004. During that slow period, Komatsu America looked to aggressively fill new or growing niches in the marketplace. It developed a modified version of its crawler bulldozer for solid-waste landfills, and a new log-loader for use in the timber industry.

“During the decline time, Komatsu decided to become more of a global company,” Schrader said. That meant identifying sources and utilizing our vast global network of manufacturing facilities and suppliers to provide industry-leading quality at a competitive price. “In the past two years, we’ve been really aggressive about regionalizing manufacturing and the supply chain to reduce our overall production costs.”

The company is optimistic it will succeed. When you want to be number two. you have to try even harder.