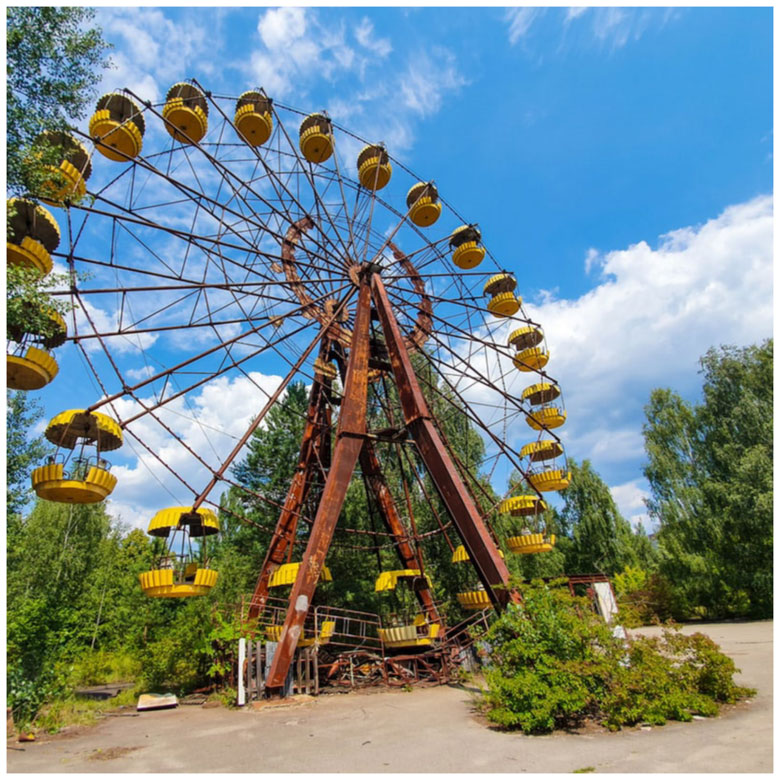 In 1986, the Chernobyl nuclear reactor explosion shocked the world and would go on to live in infamy as the worst nuclear disaster in human history. There remains an air of mysterious dread around the area. Since then, there’s been a 19-mile exclusion zone around the center of the event. Officials state that the region will be safely habitable in 24,000 years. Some 150 people live within the exclusion zone and only do so out of flat refusal to leave their homes, radioactive hazard notwithstanding.

So, naturally, some scientists got together and, amid the myriad of scientific studies to be done in the Chernobyl exclusion zone, landed on doing something of utmost importance. Making booze.

“30 years on after the accident we found was that in the area the crops were slightly above the very cautious Ukranian limit for consumption. So technically, you can’t eat those crops. But we thought, ‘Well, we’ve got some grain, why don’t we try making a vodka,'” said Jim Smith, the head of the project and established Chernobyl researcher.

Part of a three-year running research project that looked at the transference of radioactivity into crops, they found that grain in the exclusion zone was above Ukraine’s limit for radioactivity. Distilling it, however, they found that the process removed radioactive impurities down to an undetectable level.

The National Survey on Drug Use and Health found that 86.4% of adults have consumed alcohol at some point in their life, but alcohol distilled from water and grain pulled from a radioactive wasteland? That’s a bigfirst.

“When you distill something, lots of impurities stay in the waste product, and the final product is more pure. And that’s what we found with our vodka. We fermented the grain then distilled it. We found that we couldn’t measure any radioactivity in the product, except natural carbon 14 that you find in any spirit drinks, or any food,” Smith said.

But the project goes beyond merely making experimental alcohol. Internationally, 14.3 million tons of donated American textiles provide clothing for people in developing countries, yet the area around Chernobyl has remained an overlooked community that has seen and lived with horror on their doorstep for more than two decades.

One in 15 homes in the United States have radon levels — a naturally occurring radioactive substance from the earth — above the EPA action level. That’s barely a click on the Geiger counter levels that the exclusion zone sees. Respectful fear of that zone has rendered the community surrounding the zone to be veritably abandoned and left to fend for themselves.

This vodka project seeks to help the communities in the area that have been impacted by the disaster. The scientists established the Chernobyl Spirit Company and have coined their exclusion zone made spirit Atomik vodka. Newly started, it’s their plan to give 75% of the profits made from the vodka back to those affected communities.

“The problem for most people who live there is they don’t have the proper diet, good health services, jobs or investment. Because now, after 30 years, I think the most important thing in the area is actually economic development, not the radioactivity,” Smith said.

They only have an experimental bottle of the vodka, but they plan to roll out much more than that. The goal is to have 500 bottles produced by the end of the year. A study by U.S. Bank estimated that 82% of businesses fail due to cash flow problems, but the Chernobyl Spirit Company has a much bigger radioactive fish to fry than cashflow. They’re geared up for something wonderful and are fully dedicated to the outlandish, sci-fi-esque experiment.

Bottling radioactive booze for a wonderful cause? Now that’s the spirit.

About the Author:
Tim Ludwig is a New York-based writer with an outstanding collection of festive shorts. While not writing or scouring the internet for strange stories, he spends a decent amount of time in search of the perfect lobster roll. Contact: tludwig01@gmail.com