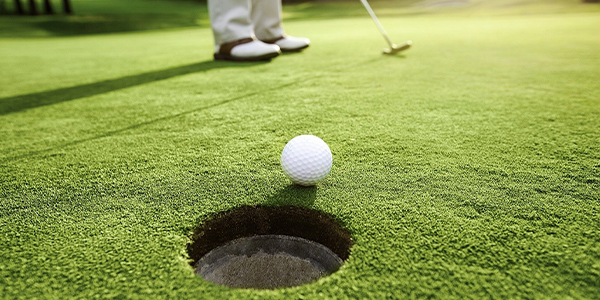 When I first decided to commit to paper my frustrations at the time it took to play 18 holes of amateur golf on a public course in America, the intention was to write a ‘letter to the editor’ of one of the most popular golf magazines. However, the longer I sat the longer the letter became until it finally became a book, now in print, of some 220 pages in length and with a very confrontational title. I wrote the original draft in four days and promptly put it away with a feeling of having vented my spleen sufficiently for the moment. Almost 10 years later, having run into the same frustrations on courses not in America but populated by American golfers, I resurrected the manuscript and began again.

I call myself a ‘grumpy old Scotsman’ and I am, indeed such a being. My roots are in Gullane, of Muirfield fame, in Scotland and I grew up within half a mile of all three of Gullane’s courses and about the same distance from Muirfield. Suffice it to say, then, I have had ‘golf’ in my blood for over six decades. I grew up with the game when there were no carts, no halfway houses, no restaurants at the turn, no pullcarts; no way to move the bags around except by oneself or, if one were wealthy enough, with a caddy.

I was a ‘laddie’ in those days, that is, one not quite old enough at 13 to qualify as a caddy but educated enough in the true tenets of the game to carry a golfer’s bag for money. I was drilled relentlessly by the caddies with whom I walked the course as to the proper conduct expected from both golfer and caddy and the most important lesson learned over these six years was that the people behind our foursome were our primary concern. It was not permitted to hold them up or cause their game to be delayed in any manner. I found that I could live through a round with a pesky golfer and be able to forget it but there was no escape from three disgruntled caddies. Lord! These fellows could swear…

Today, with no real changes in the distances from tee to green at Gullane, with all of the technological improvements in club and ball manufacture and all of the new techniques in swings and hitting, American (and some Japanese) golfers now take one hour longer to play the same courses. So prevalent has the disease become that the ‘visitors’ cannot get on the tee before 10.a.m. and the tee is closed off between 12 noon and 1 p.m. in the hope that they will be well out of the way by the time the tee opens again for the rest of the afternoon’s field. That’s a pretty heavy indictment.

In America, no one seems to be interested in a solution. Rule 1 and subsection 1 are the same on both sides of the Atlantic: “Courtesy on the Course” and “Consideration for Other Players.” The problem is not a golfing one, it’s behavioural. Same old, same old, in the history of mankind’s disregard for anything except ‘self.’ I’ve asked course professionals all across America why no one forces the issue with slow golfers and have never received one helpful reply. On some private courses a ranger is ‘Mr. Man’ but on public courses, he’s just a joke. Just a nice guy asking the good folks who have taken two hours and 10 minutes to reach the turn – where they intend to stop to pick up a bite – if they wouldn’t mind letting the folks behind play through at the first opportunity. Of course that opportunity never arises and the day becomes just that; a day on the links. No one looks over their shoulder at the following field; no one is taught to look over their shoulder. No one insists that they look over their shoulder. Why is that?

I blame the five-hour round on the television, which mainly shows medal play rounds by professional players taking their time to play. No one mentions that these men are at work! They’re earning their salaries. Their royalties and endorsements, etc. all rest upon their conduct before the cameras. The clubmakers and the ball manufacturers insist that their products be given maximum exposure and the tour professional is the vehicle for that purpose. If that means he must take all of three minutes to putt, he’ll take it. Who’s going to complain?

The important question is, “who’s going to tell the watching amateur that that’s not how he should play?” Three minutes per green, per player, per 18 holes equals how long? You do the math and you can see where the time goes. Why won’t some famous golfer say that it is not necessary for the amateur to go through all of this rigmarole? He doesn’t practice his putting so his “routine” won’t do him any more good than if he just trusted his eye. He might be surprised to know that his eye is as good as any professional’s; it’s the practicing that makes the professional successful, not a better eye. Even on the Tour, the caddy reads the greens every bit as well as his boss. But his boss does the practicing and that’s the difference. The amateur will never equal the professionals until he’s disciplined enough to practice so why go into that putting green ballet 18 times in a row with no noticeable effect?

Who will explain this to the television audience? I consider the Golf Channel to be the perfect vehicle for the delivering of the message. So why doesn’t it?

In conclusion, and to put it into perspective, when I carried clubs as a ‘laddie’ just after WWII everyone wanted to caddy to an American because they were known to tip after the game; they also played within the course limits of three-and-a-half hours. Today, there’s a scatter from the caddy shed when the coach carrying ‘visitors’ who play the American game shows up; no one wants to be out in certain Scottish weather for five hours no matter what the tip.

The glory of the game is playing it in whatever elements God sends, in less than four hours and retiring to the 19th with the feeling of having accomplished something. That game produces a kinship that doesn’t exist without the struggle. There’s little camaraderie in a five-hour ride in golf carts with lunch and sodas in between holes. These are two entirely different games. Bobby Jones said, “There are two kinds of golf. Golf, and Tournament Golf.” He spoke for the amateur players, of course. How sad he would be to find that his saying must now read; “There are two kinds of golf. Golf and American golf.” It should never have happened but it has; the saddest point is that the cost of fixing it would be exactly – nothing. Why, then, are the PGA and the USGA deadly silent on the subject? They have the cure in their hands. Why don’t they use it?

Eric Laing was born in Scotland and has lived in Bermuda since 1959. He has had a number of poems and articles published and his recent book about golf titled, “America, What have you done to The Auld Game!” published in 2004, is available through NEOS Books, Bermuda. Contact him at: neosbooks@logic.bm.