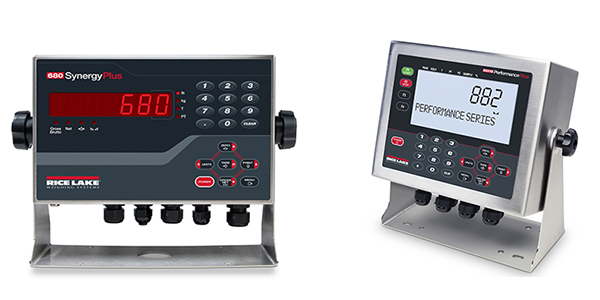 Hardly a business operation exists in the world that does not need Rice Lake Weighing Systems. “It cuts across everything,” says Vice President of Marketing Jim Sexton. “If it’s moving in the United States and worldwide, it needs to be weighed.” Weighing applications include process and inventory control, general weighing, tank/hopper weighing, bulk weighing, chemical weighing, retail/price computing and labeling, barcode/data collection, and many others.

The company’s systems weigh agents, materials, products and equipment in a range from micrograms to hundreds of thousands of pounds. As a result, its customers include pharmaceutical, food and electronics producers, manufacturers, and heavy industry such as trucking, rail, agri-business and lumber. You’ve probably seen its products at the grocery deli or meat counter where scales provided by Rice Lake Weighing Systems print out accurate and convenient price labels. On the other extreme, Rice Lake also makes truck and railroad track scales to weigh heavy loads. Amazingly, these scales allow rail cars to be weighed without uncoupling. In fact, rail cars and trucks can be accurately weighed even while on the move.

A similar dynamic weighing technology is used on scales in distribution settings. “The United States is becoming more of a distribution-based economy,” Sexton observes. “It’s not uncommon for large distribution centers to receive containerized freight from a shipment overseas and break that down in a terminal in various pieces to ship all over the country.”

In the past, shipments had to be weighed statically by placing each box onto a scale. Now it’s done in motion across conveyors with integrated scales at speeds of anywhere from 70 to 100 boxes per minute.

“We have photo eyes on the front end and the tail end; as the box passes, the scale samples the weight thousands of times per second,” Sexton explains. “We track when the box enters the weigh platform and take the series of weighments as it’s moving. An algorithmic function analyzes and computes the weight in real time.” The final step often involves adding a system for printing and affixing barcode labels to integrate with the shipping manifest system.

Electronic Conversion
The company was founded in 1946 and really took off after moving from mechanical to electronic scales in 1981. In 1983, the company had only 43 employees. Within five years it topped 100. Between the late 1980s and mid-1990s, Rice Lake made the transition from distributor to manufacturer of weighing systems. It never looked back. Today, with more than 350 employees, 80 percent of the company’s business is in manufacturing. Its 240,000 square feet of manufacturing space is under one roof in Rice Lake, Wisconsin.

“When a lot of people think of the scale business, it conjures up an image of an old mechanical dial, but it really is a very cutting-edge business that ties into systems that utilize some of the world’s most advanced technology,” Sexton says. The move to electronic scales allows customers to input weigh data into information technologies and process control systems.

“One reason we have gone full force into electronics is the communications requirement,” Sexton says. “After you take a weighment, that information flies all over the world, depending on a customer’s information management system. It commonly integrates into process controllers or data collection systems. This information might also be transmitted via wireless communication,” he adds. “In a shop floor control system of a manufacturing plant, a structure or subassembly is moving from station to station and weight measurements are taken at various points in time,” Sexton explains. “From a data collection perspective, (the scale) typically links to a customer’s process control system so that the weighments taken along the way can be recorded and compared against targets, or for scrap or other purposes.” These weighing systems also can self-diagnose problems, allowing Rice Lake’s dealers to service customers from a distance. This means replacement parts can be shipped before any break down or interruption in production occurs.

Weigh Stations
An example of Rice Lake’s state-of-the-art weighing technology is its recently unveiled 920i system—“i” for intelligent. The 920i is a digital indicator and process controller that can capture display data from up to 28 scales at once. It also has a large display panel, which improves operator to instrument interactions, and input/output control of connected conveyors. The weighing system can, for example, control the movement of liquid or bulk solids being poured into containers. Its large buffer memory allows weigh data collection for later use.

Warehouse distribution settings rely on Rice Lake Weighing Systems’ IMC-1 in-motion check-weighing system. (Picture your order whizzing along the conveyor of a large catalog company or online fulfillment house.) IMC-1 weighs and labels boxes that are traveling by at a rate of up to one every two seconds. The system is completely automated, by passing the need for employers to remove packages from the conveyor and manually weigh them. IMC-1 also integrates into distribution control systems. Another niche for Rice Lake is the truck scale replacement market. The key here is that Rice Lake is able to preserve its customers’ existing infrastructure. “Companies have made investments in older, static type scales that normally require large concrete foundations,” Sexton says. “They don’t want to tear out the old structure, so we are able to customize our scales to the foundation.”

Gaining Weight
Rice Lake Weighing Systems recently completed two successful acquisitions. The first one involved the Condec division of Eaton Corp., which manufactures pressure gauge calibration equipment. In addition, the company just completed an acquisition of competitor DIGI in New Jersey. DIGI provides Rice Lake with a stronger presence in the parts and coin-counting scale markets. A large part of Rice Lake’s business plays a crucial role in the regulation of interstate trucking. Rice Lake manufactures calibrating weights of up to 3000 lbs. each, used to certify the accuracy of truck scales. It is important for states to certify the accuracy of their truck scales up to 100,000 pounds.

Rice Lake is the fastest growing company in its industry with a network of more than 2,000 distributors in 75 countries. One reason for its success is a focus on growth markets, such as industrial food processing and a move towards case-ready meat and centralized packaging instead of in-store packaging. This requires bigger and faster weighing and labeling equipment. In addition to the company’s technological competencies and its ISO 9001 quality certification, Rice Lake depends equally on customer service. For example, on any given day, 95 percent or more of orders for its 30,000 different products are shipped the same day. And Rice Lake does not use voicemail. When you call, a real person receives your call.

“It’s a strategy and a culture to see that you speak to the very best person available with respect to whatever issue you have,” Sexton says. “It stands out in people’s minds and there’s no question that every day (this philosophy) contributes to our long-term success.”