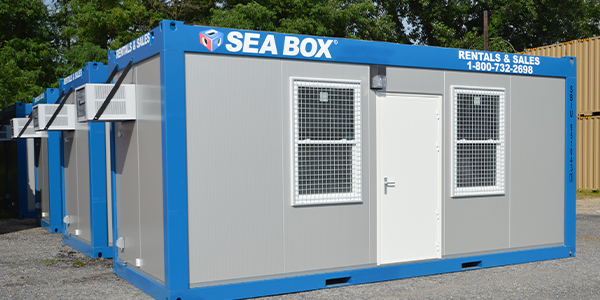 At first blush, it’s hard to imagine a more low-tech sounding business than overhauling shipping containers: those hulking steel boxes that you see stacked up or dangling from cranes at any seaport, or whizzing by on a rail car.But that rusty image bites the dust at Sea Box, Inc., a South Jersey company that takes these staples of modern shipping and converts them into emergency command centers, fortified “Battleboxes” for special forces in Iraq, temporary housing for circus elephants, or even military field hospitals that are known as the “21st Century Military Hospital System.”

In less than a quarter century, Sea Box has risen from a small refurbisher of old shipping containers to a significant military contractor. Company officials estimate that about 80 percent of the business handled by Sea Box, which is based in East Riverton, N.J., is now for the defense industry.

“We have been discovered by the Department of Defense,” Terry Brennan, who is the vice president of operations and the brother of the company’s founder, stated flatly. A lot of that work means subcontracting for some of the nation’s contractors, names like Raytheon and Lockheed Martin.

Ready for battle
America’s growing defense needs, the result of the ongoing wars in Iraq and Afghanistan, have meant considerable new work for Sea Box on projects like the Battlebox, an insulated, 20′ x 8′ x 8′ container that can house six soldiers. The Battlebox includes fold-down bunks, a workstation, air conditioning, full fluorescent lighting and power outlets.

The units, which are used by U.S. Special Forces troops in the war zones, can be equipped with modular plastic “Blast Walls” that can be Kevlar armored and ordered in any camouflage scheme. They can also easily be modified for use by medical teams and for a command post in any domestic emergency.

Such high-tech projects show what a long way Sea Box has come from fairly humble beginnings.

In 1982, New Jersey businessman Jim Brennan, who had worked for a large national trailer company, found himself unemployed, and so he bought and sold one container (at a profit!). The experience led him to create Sea Box, which was launched on Valentine’s Day, 1983.

The new start-up’s timing was excellent. According to Terry Brennan, the surge in container-based shipping was roughly two decades old in the early 1980s, and a number of companies were looking to overhaul their fleet, and didn’t want to deal with the logistics of selling their used containers to the public. Sea Box developed the capability to collect a company’s used containers, truck them to its storage facility, refurbish them, and then sell them, he explained.

Jim hired long time co-worker from the trailer sector Bob Loughery as his first employee. Bob helped to lay the groundwork for purchasing containers from many different leasing companies. Jim later hired his brother Terry Brennan when Budd Co. in Philadelphia closed its doors in 1986. Terry worked in the electrical test department of the railcar division at Budds. With his electrical experience Sea Box started taking on more complex container shelter designs. Nick Catanzariti, an experienced container salesman with knowledge of military sales started in 1988 to complete the formula needed to build Sea Box into the defense contractor of today.

The company’s specialty became modifying containers in the global standardized size – typically either 20-feet or 40-feet long – that could be transported to emergency or military situations for use as a command post or for specialized functions.

Disaster relief
“The U.S. military is in constant need of specialized control rooms, EMI/RFI shielded radar shelters, humanitarian cargo relief delivery platforms and many other types of Intermodal equipment,” explained Brennan. “Since the start of the 1990s, the military has been by far the largest customer for Sea Box.”

In addition to warfare, these converted containers have proved quite useful in natural disasters or refugee type situations in remote locales around the world. These instant shelters manufactured by Sea Box can be rapidly fitted out using unskilled labor and connected to local power supplies; Sea Box can offer electrical wiring in their shelters for any part of the world.

Some of the government work that Sea Box now performs involves teaming with overseas manufacturers, including makers of aluminum shelters in Norway and in Turkey, where considerable work for the Defense Department is carried out. In fact, in 2004, Sea Box received a five-year U.S. Army contract worth up to $431 million for as many as 138,000 modular shipping containers, which have been designed at the company’s office in South Jersey and built in New Jersey and Turkey.

Despite its rapid growth as a military contractor, Sea Box has essentially remained a small, family owned company, with about 50 employees, the bulk of which are based in East Riverton. In addition the company maintains a small storage yard in North Jersey that services the New York metropolitan area. The company also has a thriving domestic storage rental business, primarily in the area between New York and Philadelphia.

“We have a really good engineering department that does a lot of design work for customers who come to us and ask us questions such as, ‘Can you design a container to a certain strength, with low tare weight, in a 3D computer model with Finite Element Analysis?’, Brennan explained. So successful has this engineering capability been, that the company now holds over 50 patents related to container and intermodal technology.

Aiding firefighters
A good example of the kind of specialized container that Sea Box builds is one that it designed for Kidde Fire Systems to train firefighters, particularly at airports. Once the training structure is trucked to the proper location, officials can simply flip a switch and flames fill the inside. The container is used by firefighters in heat-resistant gear who can experience conditions similar to a burning aircraft.

One of the company’s major current projects is called the Joint Modular Interface Platform, or J-MIP, which Brennan described as a unique cooperative project between the Army, Navy, Marines and Air Force in developing a new method of shipping critical cargo. The J-MIP is a truly intermodal load platform being capable of seamlessly moving between land, sea and air assets. Sea Box also manufactures the (ECDS) “Enhanced Container Delivery System” pallet, which can even be precision dropped from aircraft via GPS guided parachute technology.

Yet even as it grows, Sea Box remains the ultimate do-it-yourself company. Said Brennan, “We are a fairly small, dedicated, team with a big emphasis on being able to give our customers on time, quality products, designed to last. We pride ourselves on being able to meet the growing technological needs of our expanding number of clients; both commercial, and military.”