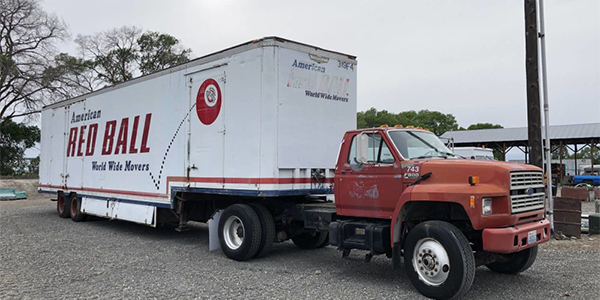 It’s one thing to move down the street, to another town or even a different state: you pack, you move, you unpack. Moving to another country entails a few more steps: you pack, you transport your goods to the port and send them across the ocean, your goods come off the ship and enter customs, you transport them to your new home, unpack, assimilate to a new culture where English is not spoken readily and voila, you’re done, right?

Well, over that 45- to 90-day period, a lot can happen and whether you’re civilian or military personnel, safeguarding against vandalism and other breaches can be harrowing. Thank goodness for American Red Ball International, a division of Atlas World Group. Its new Global Move Security (GMS) solution developed by RFID Decisions and RFID Global Solution for the household goods forwarding industry, has just made the management, control and security of military family international household goods shipments more efficient and effective.

“Global Move Security is a product that is still evolving,” relates Red Ball International President David Hope. “We’re still in the testing phase to demonstrate the efficacy of the process and technology before we expand and proliferate.” Since the end of last August, the company’s trial has involved roughly 11 shipments traveling between Fort Lewis, Wash. and Grafenwoehr, Germany. The results demonstrated a high degree of capability and confidence that the system would deliver as designed, Hope says.

There are two parts to the program, he explains: “One is getting better control over lost and missing items” that are shipped in lift vans, which are large plywood crates, 200 cubic feet in size, used specifically for military moves. “GMS provides in-transit visibility for the service member and for the service providers involved in the movement of the military family’s household goods between duty stations. RFID technology also has the potential to uniquely and automatically identify shipments, and their contents, in a way that could never be done before.”

This proven capability overcomes severe limitations in the industry by providing the technology that allows automation of many data processing functions. The potential to reduce claims through significant improvements in security presents a tremendous benefit to the customer. “As a result of the technology, the visibility of the goods at established points along the way improves security and offers true in-transit visibility for not only the family members but to the household goods forwarders,” Hope stresses.

Visibility through the journey
The way it works is simple: RFID tags are affixed to individual items and to the lift vans they are loaded into. The data is recorded in an easy to use hand-held device, which provides the basic input for the items and lift vans that constitute a particular shipment. RFID tags store information on tiny integrated circuit chips, about the size of a pinhead, which are attached to shipment components. Strategically located RFID readers extract information stored on the tags and securely report, in real-time, their whereabouts to the GMS Global Server. The location information is then made available to families and transporters through the Internet.

The information received by the GMS Global Server is the precise arrival and departure data of the items identified in a shipment. This data is compared to the information originally captured at the time of packing to ensure that all the items constituting a shipment have made it to the next location.

This is the first time this technology has been used for the moving of household goods and it seems appropriate that the military be the beneficiary for the program: Armed services move an estimated 300,000 families overseas each year. GMS, for military use, is expected to be online within two years. The goal, says Hope, is to expand into an additional 28-30 locations internationally. (Within the states tracking is done via GPS, “which works well for domestic moving,” Hope adds.)

To pursue the testing of this program, American Red Ball International partnered with the Defense Department’s Surface Deployment and Distribution Command (SDDC), RFID Decisions, LLC and RFID Global Solution, Inc. to bring the system to fruition. RFID Decisions, based in the Seattle area, specializes in the design, development, team and resource formation for the deployment of RFID solutions in government and industry. “The RFID tests thus far are encouraging for household goods movement and particularly with international household goods moves. The use of RFID technology is not new, but it does provide benefits such as shipment security and tracking by providing chain of custody accountability and real time in transit visibility,” said Lt. Col. Steven Amato, deputy chief of staff for personal property, Headquarters Surface Deployment and Distribution Command. “RFID gives ability to see through plywood and verify contents are still there all along the route,” adds Don Robinson, founder of RFID Decisions and a consultant to American Red Ball. “You get a reading at each point of the handoff so you know the entirety of the shipment is still in tact. It can provide automatic real time visibility in terms of where the shipment is.” This technology would be particularly helpful to a company such as American Red Ball International, which moves 3,000 shipments annual for the military, with an average of 3,500 to 4,000 pounds per shipment.

Red Ball International plans to extend the technology to commercial shipments, once it is implemented in military moves. “The benefits of RFID clearly apply to our private and corporate clients as well as military,” Hope said. “RFID elevates shipment security to an all new level. It carries the potential to revolutionize the household goods industry.”

On the ball
American Red Ball has been pursuing the craft of moving people safely and efficiently since 1919. In 1968 Red Ball established a presence in the international relocation market, concentrating on servicing military personnel. “What we do is international household goods relocation; 60 percent is with the military, moving families to bases,” Hope says, adding. “There is a big difference in international moving because of the number of times a shipment passes through different organizations and the complexity of the issues involved with international relocation.”

To facilitate the third most stressing circumstance in a person’s life, Red Ball International offers a single point of contact to its clients throughout the move, stresses Marketing Manager Pam Jackson. There are a variety of programs that smooth out the many wrinkles of the moving process, such as pre-move assistance, storage services and even intercultural counseling for those moving overseas. “Through our parent company, Atlas World Group, we can put our clients in touch with relocation services and even help with their housing needs,” Jackson adds.

As far as market trends, Hope points out, “This industry is slow to embrace change. The last major innovation was introduction of the lift van in the early 1960s. Because this industry is very labor intensive, due to the physical movement involved, it doesn’t lend to automation.”

GMS “is the first significant utilization of RFID technology in the moving process,” Hope says. “The advantage to the consumer is huge, in terms of providing peace of mind regarding the safety of their possessions.”