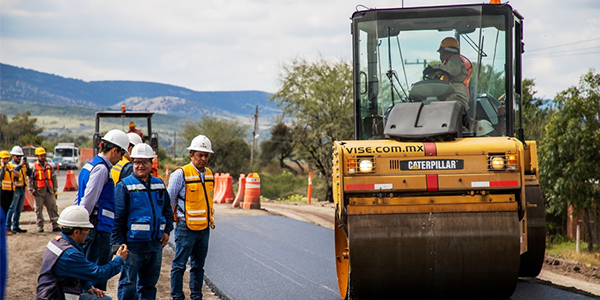 Constructora y Pavimentadora VISE S.A. de C.V. (CYPSA VISE) was founded in the city of León, state of Guanajuato, on March of 1965. The firm’s essential objective was to respond to the region’s development needs related to roads and country roads construction and urbanization, initiating its work with the now disappeared government agency Mexican Association of Country Roads.

CYPSA VISE belongs to the VISE Group, a conglomerate that has been part of Mexico’s history for the last 66 years, and has created credibility in many industries as a company that produces and delivers top quality products and services. Under the VISE umbrella, six divisions can be found covering industries such as chemical, commerce, construction, food, media and real estate.

An important activity at Grupo VISE is the production and exportation of gelatin to countries worldwide. It has successfully penetrated the international market in this segment, but regionally it has developed products and services for other industries. Renovadora VISE was founded in 1940 as a distributor of Goodyear tires and its product lines. In 1989, the company started refurbishing truck tires. Currently, the modern plant carries the latest Bandag technology, systems and equipment for refurbishing light truck and heavy truck tires.

Another segment in which Grupo VISE participates is in the Central Mexico real estate market. Since 1982, the group has created five real estate companies dedicated to the construction, sale and lease of industrial space and industrial parks: Inmobiliaria Pavimar, Sandomar, Inmobiliaria Savimar, Edumarlo, and Inmobiliaria Marlo de Occidente, with operations in the states of Guanajuato, Jalisco and Michoacán.

The company builds industrial complexes to clients’ specifications, and some of the largest industrial groups in the region have become VISE’s clients, such as Grupo Danone (dairy and food), Sabritas (snacks and food), Estafeta (courier), Bonafont (bottled water), and Nacobre (metal tubes and fittings).

ROAD MAPPING
The state of Guanajuato is located in Central Mexico, and it borders the states of San Luis Potosí, Querétaro, Michoacán, and Jalisco. Three- and a-half hours from Mexico City, Guanajuato, the state capital, is a major tourist attraction for its colonial architecture, its 35 churches and its European style character preserved from the colonial era, as Guanajuato was one of the first regions colonized by Spaniards in the 16th century. Mexico’s current president, Vicente Fox Quesada, and famous Mexican artist Diego Rivera hail from Guanajuato.

CYPSA VISE is the region´s leading company in the construction of roads, hydraulics and urbanization. “In the last 10 years, public works have comprised most of CYPSA’s activity, which has allowed an average growth of 15 percent annually,” said Benito Lozada, engineer and general manager. “However, the national market is still lacking a comprehensive road system, despite the governmental efforts in such sense.”

In the last three years, the company has built over 20 vehicular bridges and highways, including the preeminent South Celaya toll road and the Distribuidora Vial Juan Pablo II. It also built the Zacatecas and the San Luis Potosí airports’ runways, the Ortega and Del Sepio dams and industrial and commercial infrastructure for Procter and Gamble, Wal Mart, and General Motors. According to Lozada, the nation is in need of larger financing for roads, water treatment plants, and community protection against floods all over the country but especially in the central region.

Lozada believes this is a difficult year for Mexico due to presidential elections, so CYPSA will focus on private investors. Guanajuato is mainly an agricultural state although it is also home for industries such as shoes, textile, automobile, petrochemical, and crafts. “The Asian competition devastated some of these industries, and it has affected private investment,” he said. However, CYPSA VISE developed over 20 projects in 2005, such as Parque Industrial Las Colinas for Grupo Lintel, a Mexican industrial developer that sells or lease industrial spaces and plants to multinational companies.

COMPANY’S WORKING PROCEDURES
“At CYPSA VISE, we have standardized and formalized the procedures of our work routines. Grupo VISE has implemented a quality system based on ISO: 9001-2000 on most of its processes,” said Lozada.

The company owns a fleet of more than 100 units of heavy-duty equipment including wheel loaders, crawler tractors, excavators, graders, compactors, asphalt equipment and more. At the asphalt plant, the company has grinders and mixers, and a maintenance and service workshop to keep up with all equipment and machinery. “We carry all standard asphalt mixes but we also work with many new technologies like the SMA – stone matrix asphalt – a German technology in micro-surface and asphalt sealers,” said Lozada. The company’s competitive advantages include working with the client at developing the project in order to achieve enhanced performance, constantly searching to improve the tasks at hand with less effort, lower cost, and in less time. The company’s motto defines productivity: to do more and to do it better with less.

The company’s areas for continuous improvement include human resources, statistical controls, and work systems and planning. “In the area of human resources, we share common knowledge and ideas of our personnel within our total quality methodology, because our employees play an instrumental part of our commitment with our clients,” said Lozada.

The company employs highly trained personnel in every department, from the operators at the actual building site to top management. Some professionals have over 30 years experience in the field. The company hires 750 direct employees and additional subcontractors at any given time.

“CYPSA VISE is a serious company that has always complied with its commitments and responsibilities. We offer a personalized relationship with our clients and try to exceed their expectations, which have enabled us to develop a portfolio of satisfied companies along these 40 years of performance. We believe we have achieved our vision of being a company with world class standards that represents the best option on the market for our clients,” he concluded.