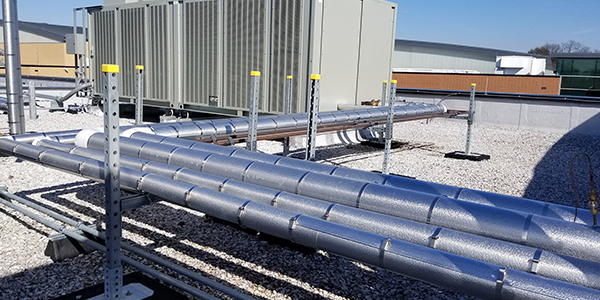 Almost all employees from time to time think they know enough to run their company’s business better if they were the owners. But most do only just that: think about it. Tom Rogers and Tim Baird actually did it by forming the R&B Mechanical Company, Inc. in 1998 to apply what they knew about the fabrication business to establish their own unique market niche.

With Baird’s sales connections and Rogers’s mechanical engineering knowledge, R&B today is in the enviable position of not only being a market leader, but really one of the only players in their highly specialized market niche.

“Most fabricators focus on one thing,” Rogers explains. “There are pipe shops, there are sheet metal shops, there are those who do only ASME code and those who do only non-code. They may have the ability to manufacture larger quantities. But they only manufacture larger quantities of one type of thing. Our idea was to become a sort of one-stop shop that can do custom jobs, on-site or shipped to a contractor, that involves everything from flatwork to complete piping systems to entire structural systems that include platforms, handrails, ductwork, and precipitator components.”

Based in Cartersville, Ga., R&B Mechanical primarily serves customers in its Southeast region, though recently it is performing site work in Pennsylvania. One of its major customers is Alstom Power, which is headquartered in Belgium, so R&B Mechanical products and services have international application.

A Balance of Two Business Lines
There are basically two business lines: on-site field construction and modular systems built-to-order shipped to the customer for assembly. Rogers says that business was roughly evenly divided between the two, though recently there was some drop in field construction. “It seemed after the uncertainties following September 11, a lot of building projects were put on hold,” Rogers observes. “Nothing drastic really, just a slowdown. The modular work started to account for maybe 85 percent of the business as compared to previous years. But of late it now seems that new building construction is starting to pick up again.”

In fact, Rogers claims that his company is somewhat impervious to the peaks and valleys of traditional business cycles because many of his projects have such long lead times that economic factors don’t affect contracts he’s already won. It also helps that his modular systems work is in the particularly “hot” area of environmental controls for the power industry, specifically next generation selective catalyst systems (SCR). New environmental regulations are going to create a demand for these systems until at least 2005, Rogers estimates. Consequently, whatever economic or regulatory pressures power companies may face that result in expenditure cutbacks, it won’t adversely affect the pressing demand for new scrubbers to meet the latest emission standards. Additional systems are in their infancy, such as the wet flue gas desulfurization (WEGD) systems that are expected to keep business strong until at least 2000.

Unlike field projects in which R&B Mechanical crews construct installations on-site, other firms design and assemble emission systems. However, R&B Mechanical gets involved in the processes. And though the components R&B Mechanical supplies are modularized, there is no such thing as one size fits all. “We’re doing retrofits,” Rogers points out. “It’s sort of like putting a bathroom in a house that’s already built. We have to be able to detail to – and sometimes massage a little bit — the specs of what someone else tells us is the unique situation of each individual site. There aren’t often components you can share from one site to another.”

In-House Manufacturing
Obviously, then, concepts of mass production don’t apply here, and the need for highly trained and highly skilled workers is absolutely critical to complete projects that typically take about 120 days to turnaround. Rogers says finding the right manpower has never been an issue, however. Even when he has to send people out to construction sites for certain extended lengths of time, he is in the enviable position of having a sufficient pool of temporary talent to maintain production operations. All manufacturing is performed in-house in a pair of nearby located facilities totaling approximately 60,000 square feet, employing roughly 60 people.

“We’re giving some consideration to outsourcing some material processing,” Rogers says, “but other than that, the specialized nature of our projects doesn’t lend itself to subbing out simply because we’re not a mass producer. One thing that has really helped us, however, is computerization. There are just some processes that can be done faster, and more accurately, today with computerized (CNC) machinery. But the skilled laborer is still essential.”

Maintaining Focus and Reputation
Rogers says a good deal of the company’s success can be attributed to “sticking to your knitting.” R&B Mechanical serves a particular market niche very well, and there’s really no need to do anything other than continuing to do just that. “We don’t get lost in the big picture,” he says. “We break things down in bite-sized pieces and that’s what we focus on. In essence we’ve got this particular kind of widget, and we make a very good widget for the people who need it.”

Indeed, Rogers notes that the company does very little traditional advertising, and doesn’t even have a sales force. “Tim and I have extensive contacts in the industry,” Rogers explains. “Our customers know us by reputation, and much of our business is repeat business. And, the fact is, I don’t know of any other fabricator that offers exactly what we do, so we don’t face a lot of local competition.”

Rogers also has modest goals for the company, which is basically to keep on doing what they’ve been doing. “Our annual revenues are between $5 to $7 million,” Rogers says. “I can see us easily becoming about a $10 million a year business. But I wouldn’t want to grow much more than that. The margins are still good at that level, and I think if you try to expand too far beyond your core capacities, your margins start to narrow more than they’re ultimately worth.”

Another part of R&B Mechanical’s success can also be attributed to the daily involvement of the founding owners. There’s no thought of handing over daily management to someone else. “We’re hands-on kind of managers,” Rogers says. “This is what we like to do.”