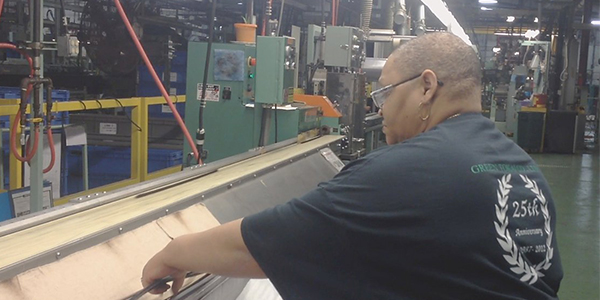 “Green Tokai is different from most Japanese transplants in the United States,” notes Hiroaki Yamamoto, technical center general manager of GTC. “Even though we are a Japanese company, most of our employees are American. Moreover, we didn’t rely exclusively on our Japanese parent in order to become a success. We developed the technology we use at GTC in the United States. Now, our parent Tokai is even using GTC technology in its production process.”

Paint-Film Technology
Green Tokai’s patented paint-film process couples paint film with gas assisted injection molding that wraps beyond the parting line, eliminating the need to paint the part. The result is a part that is environmentally friendly and 100 percent recyclable. “During the last three years, we’ve received several patents for our paint film process,” says Yamamoto. “Our patents make us a big player in the U.S. automotive market. Paint-film technology is huge and it is going to have an enormous impact on the auto industry in years to come.”

Green Tokai’s injection molding process involves feeding TPO and other plastic materials through an injection unit where it is melted and shot into an injection die. The process produces parts that are lighter, more durable and less costly to make.

“On our first step between 1988 and 1991, we tried to copy Japanese technology in our molding process,” explains Yamamoto. “After 1991, our second step was to pay attention to finding a U.S. technology not available in Japan. General Motors, one of our customers during the 90s, put us in contact with many companies that have good technology. On our third step we tried to develop our own technology. Then we found that the paint-film process had been in the market for a while, but no one had developed the technology necessary to make it commercially viable. Then we came along and perfected the process.”

Green Tokai is on its third generation of paint film parts. The company initially started mass production with the Honda Accord body side moldings the summer of 1997. Since then, it has added Toyota to its film customer base as well as expanded product lines to rocker moldings and front air spoilers. The company has produced over 13 million parts to date.

According to the NSPE, “The Technical Center of Green Tokai created the paint-film technology as a process that would achieve the goal of wrapped paint film and insure that the finished product would be superior to a conventionally painted part, not only in appearance but also in its ability to perform well in harsh environments.”

The NSPE goes on to say that “Paint-film technology results in a large reduction in environmental contamination. Since thermoplastic materials are used, the product is easy to recycle and there are no solvents released into the environment during the manufacturing of the product.”

Green Tokai’s paint-film technology is starting to turn heads in the automotive world as well, not only for its environmental friendliness and cost-effectiveness, but also for its unique properties. A product made with paint film has excellent chemical resistance and stands up better to chipping than regular paint. “A painted part can chip easily because it’s cured,” says Terry Klemt, sales manager for GTC. “There’s no curing with paint film, so its doesn’t peel or chip.”

Today, GTC supplies Honda and Toyota body side moldings and rocker moldings. “Because the products we produce with our paint-film process is good for the environment and saves the customer money,” says Yamamoto, “we’re quickly expanding in the market.”

Green Tokai’s injection molding area at its Brookville plant hosts an array of machines in sizes ranging from 100 to 2,450 tons. Body side molding and side sill garnish are the two primary injection products manufactured at the plant for automotive OEMs.

Another of Tokai Kogyo’s patented processes is TVE (Tokai Variable Extrusion). What’s unique about TVE is that it produces a molding that changes profile within the same extrusion, resulting in two profiles from one die. This streamlines what used to require three separate parts into one molding. Green Tokai’s variable extrusion lines also have the ability to extrude PVC by itself or PVC over metal. GTC also can extrude rubber products using this process.

Tokai Kogyo, like many Japanese companies that have established a presence in the United States, initially entered the North American market through a joint venture with an American company. In the case of Tokai, that U.S. company was Ernie Green Industries. The joint venture between the two companies was established in July 1988. The name Green Tokai was established by incorporating the Green and Tokai name of each company respectively. In 1991, Tokai Kogyo bought all of EGI’s shares to become the sole owner of GTC.

In addition to GTC’s plastic extrusion and injection molding products, the company offers two more products to the automotive industry: rubber extrusion parts produced in Ohio and weather strips manufactured at its second U.S. location in Maysville, Ken. Green Tokai’s capabilities in rubber extrusion allow it to extrude up to three different materials at the same time. The company’s trunk- and-hood seals include dense rubber, sponge rubber and metal. Door seals are another of GTC’s rubber products.

The making of GTC’s rubber products begins in a special mixing area where a custom recipe is formulated. This recipe is then processed to produce a type of extrudable rubber. Finally, the product is sent to process machines where it is automatically drilled and clips are inserted.

The 140,00-square-foot production facility in Kentucky manufactures more than 12 million inner and outer weather strips for Japanese transplant OEMs. The Kentucky plant was constructed in 1995 to accommodate the company’s growth. The company’s headquarters in Ohio began operation in May of 1998 at 70,000 square feet and has expanded steadily to its present size of more than 260,000 square feet. Together, the plants employ approximately 900 people.

“We owe much of our growth to our technical center in Ohio,” says Klemt. The GTC Technical Center houses a team of professional engineers and production facilities that are dedicated to research and development functions so that parts may be made and tested without interrupting production lines. Green Tokai’s Technical Center specialized design department houses more than 10 design stations capable of communicating in CATIA, IGES and CAELLUM formats. This enables GTC to design and develop parts without being dependent on customer supplied drawings. By establishing its R&D and design facilities in the United States, the company can respond quickly to changing market conditions. The 24,000-square-foot GTC Technical Center was opened in 1996.

As Klemt explains “With the globalization market change in the automotive industry today, it is impossible to grow without a niche. We have found that niche and have the opportunity to grow extensively.”