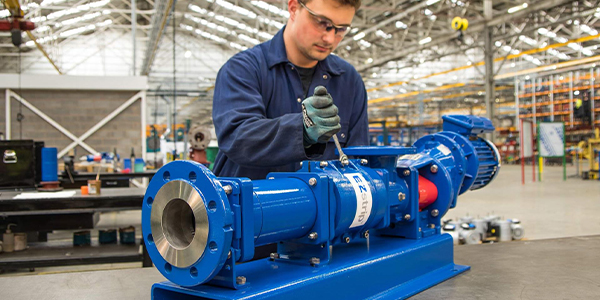 The Annihilator sounds like the name of a pro wrestler, or maybe the latest version of a cruise missile to come out of the Pentagon. But in fact, it’s the name of a mechanical grinder that’s manufactured by Moyno, Inc., an Ohio-based company that first marketed the cavity pump here in the United States and has long been the leader in its field. This twin shaft solids reduction unit is able to aggressively cut solids down to size both in industrial and in municipal treatment settings, protecting downstream equipment.

It is just one of a number of mechanical innovations developed over the last 70 years by Moyno, long a unit of Robbins & Myers. In the 1960s, Moyno invented many of the key products that fueled the growth in wastewater treatment facilities, and today it continues to develop devices for the fastest growing industries, including oil and gas as well as pulp and paper production.

“The growth has been in municipal water and wastewater and oil and gas,” said Dave Doty, the marketing manager for Moyno, which has always been based in Springfield, Ohio. “The rising price of oil and gas has a big part to do with that, because the people who are producing oil and gas are going gangbusters.” He added that municipal wastewater is a hot area “because of population growth and increased government regulation.”

From Moyno to Moineau
Doty said that Moyno is developing products to address the fastest growing markets, not just in North America but abroad. “We do a lot of international business,” he said. “The China market is a huge market, and there is great potential for revenue growth, obviously. In China, there certainly is a lot of municipal waste work.” Moyno is currently involved in a joint venture in a manufacturing plant in China, and the firm also has offices there and in Singapore.

In fact, the roots of Moyno are international. The inventor of the progressive cavity pump was a Frenchman named Rene Moineau, who turned to Robbins & Myers to market the new pump in the United States because of the Ohio company’s expertise in the electric motors that were required to power them. At some point, the pumps were marketed under the Americanized name of “Moyno,” which emerged in 1977 as its own company under Robbins & Myers.

Robbins & Myers remains a global force today. The company, with annual sales of $426 million and a work force of 2,500, has operations in places as far-flung as Brazil, Germany, Italy, Mexico and Singapore. And it has joint ventures in Australia, China, France, India and Taiwan. Doty said that about 250 of those employees work for the Moyno unit.

In its early years, Robbins & Myers produced the progressive cavity pump primarily for industrial customers. During World War II, U.S. Air Force units fighting in the African desert theater required a method for removing contamination from the oil that was essential to keeping our planes in the air by filtering the oil in the shortest time possible, and which would be mobile since our airfields were under constant threat of attack. The result was the Briggs Oil Clarifier, which employed a Moyno Pump that allowed the unit to be 50 pounds lighter than it had been with another type of pump.

Growth of municipal treatment
Doty said that a turning point for the company came in 1957, when the firm moved into the fast-growing area of municipal wastewater treatment. In 1961, the company produced the first open-throated J-frame pump, which was highly effective in handling fluids with a much higher viscosity. Over the next couple of decades, much of the critical research and development at the future Moyno units related to wastewater treatment, including the sewage pump developed in 1962, a new design for treating dewatered sludge in 1967, and the 1971 mazorator, which was designed to grind solids in municipal sludge.

After Moyno emerged as its own company, it moved more aggressively into international markets in the 1980s and introduced several new lines of pumps that are popular to this day. Several major new innovations were rolled out in 2000, including the Moyno 2000 HS system, which is the latest technology in transferring dewatered sludge – a design that also included a twin screw feeder for feeding the dewatered sludge into Moyno pumps.

“In 2004 we introduced the 2000 CC, which is the most rugged, close-coupled pump on the market,” said Doty, who noted that during that same period Moyno acquired the Annihilator line through an acquisition. Moyno Annihilator grinders are twin shaft solid reduction units designed for a variety of industrial and municipal applications including not just traditional sewage treatment but also correctional institutions, wastewater at rest areas and mobile home parks, paper and stock wastes, vegetable, fruit and poultry wastes, paint and chemical wastes and waste fuels. The new Moyno Series 4 Annihilator grinder now offers new features including optimized cutter combinations, one-piece flange housing and a quick-change cutter cartridge.

Doty said another recent Moyno innovation is power-flow pumps. “They’re targeted to applications where elastomers are not compatible with the product being pumped, or where the pressure is higher than what the electronometric staters can handle,” he explained. “They’re more targeted at the general chemical industry and at pulp and paper.”

Going high-tech
Doty said that one area in which Moyno remains unmatched is its service centers and distributors. The company says that it maintains the largest in-field inventory of progressing cavity replacement parts in North America, which ensures availability and reduces process delays. The advanced Moyno Netlink System electronically links Moyno’s North American distributors via an intranet, giving the customer instant access to the company’s multi-million-dollar, in-field replacement parts inventory. This proprietary system relies upon innovative technology that provides distributors with the ability to source parts quickly. That can prevent or minimize costly downtime.
Moyno continues to branch out into new types of technology. “We offer web cast training to all our distributors and representatives,” Doty said, “We are also enjoying the major portion of the North American market share in progressing cavity pumps, and we have since day one.” And Moyno has the name to prove it.

Moyno’s products are designed for a range of industrial and muncipal applications, from wastewater to chemical wastes and waste fuels.