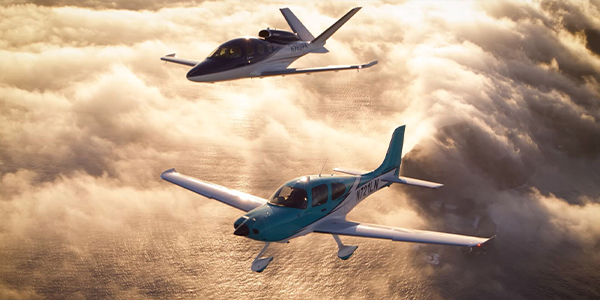 If there were one industry in which constant innovation is the presumed standard, it would be aviation. Not so, says David Coleal, Chief Operating Officer of Cirrus Design Corp. In fact, there has been very little innovation over the last half century among manufacturers of single-engine airplanes. Then five years ago, Cirrus literally took off (taking the industry with it) with a flurry of revolutionary innovations.

Why the lack of innovation across the industry? Part of the problem may have been that manufacturers maintained the old barnstormer’s mentality that a “real” pilot needs little more than a set of wings and his or her wits to conquer the wild blue yonder. Still another reason may have to do with taking the perennial market leader Cessna by surprise. Regardless, Cirrus recognized an opportunity to re-design its single engine planes, which led to the company finally surpassing Cessna by delivering more planes to the market in the first quarter 2004, Coleal said.

“Truthfully, the industry was not providing the market with anything new until Cirrus decided to come up with a host of advancements in ergonomics, engine management, styling, control systems, and safety,” said Coleal. “Previously people thought that if you’re a pilot, you don’t really need advanced avionics, but these advancements are very valuable to pilots because they make it more fun and more safe to fly.”

Growing, growing, gone
Cirrus began in 1984 as a kit airplane design and manufacturing company in Baraboo, Wis. In 1994, the company moved its headquarters to larger facilities in Duluth, Minn., and began research and development of the SR20, which was awarded FAA Type Certification in 1998. The next year, production jumped from nine to 90 planes in one year. Its anufacturing facilities in Minnesota and Grand Forks, N.D. are thoroughly modern aircraft construction plants capable of producing over 40 planes a month. With 920 employees and 2004 sales projected at $190 million (based on a production run of 550 planes), Cirrus is currently the world’s second largest manufacturer of single-engine, piston-powered aircraft, and the SR22 is the industry’s best-selling model. While the company captured the number one position in the first two quarters of 2004 but market share is only one factor the company looks to as an indicator of success.

“We increased the HP and performance of the SR20s formidable flying qualities and created our next generation model, the SR22, which was FAA certified in 2000,” said Coleal. Cirrus has consistently increased its production figures because of its unstinting attention to streamlining its manufacturing process and providing customers with great value. Over the last five years, the time it takes Cirrus to manufacture one plane has decreased by 30 percent.

“We are constantly looking at our process with a keen eye for waste reduction to take out non-value added activities,” said Coleal. “At lower volumes you can take more time to perform operations but at higher volumes you need to ensure higher quality and more accurate methodology.”

Cirrus conducted a lean analysis of its manufacturing process, which led to better placement of tools and the consolidation of workstations. Between 2001-02 Cirrus made less than one plane a day. By reducing labor hours from 4,000 per plane to 1,800 per plane, the company reduced safety incidents by 70 percent and cut quality-related issues in half. “It’s the combination of our vision of being able to change the industry by developing a product design philosophy that meets our objectives exceeds customer requirements and to have an operation to execute it,” said Coleal. “We can now make two three planes a day and capture market share because we have the production and operational capabilities to do it in a lean way.”

As for the frame of the plane, using composite construction Cirrus achieves exacting engineering specifications and produces aerodynamically superior shapes. With minimal seams and a low-drag surface, Cirrus aircraft can reach higher cruise speeds using a fuel-efficient engine, even with fixed gear and one of the widest cabins in its class.

The engine, a normally aspirated engine by Teledyne Continental with six fuel-injected cylinders and a balanced exhaust system, offers a smooth, low-vibration ride. Time-between-overhaul is up to 2,000 hours, or over 15 years of flying under normal use.

With respect to safety, Cirrus Airframe Parachute System (CAPS) is standard equipment on each of Cirrus’ aircraft. This safety system will lower the entire aircraft and its occupants safely to the ground in extreme emergencies and when all alternatives to land have been exhausted. With the pull of a handle, a solid-fuel rocket blows out the top hatch, deploying the parachute, and buried harness straps unzip from both sides of the airframe. Within seconds, the canopy will position itself over the aircraft and allow it to descend gradually. The final impact, roughly equivalent to falling 10 to 12 feet, is absorbed by the specialized landing gear.

Its TKS-based weeping wing ice protection system allows pilots to escape from inadvertent icing conditions. An antifreeze solution weeps out from panels mounted on the leading edges of the wings, horizontal stabilizer and from the propeller. If ice has already accumulated, the solution will chemically break it down and allow aerodynamic forces to carry it away. “With extensive research and investments in design and technology, we have created FAA certified small aircraft that provide greater control, better comfort and more safety at an affordable price,” said Coleal. “We’re not different for the sake of being different. We’re different because it’s better.”

If we build it, they will fly
More than 30 percent of Cirrus customers are new pilots, which means that the closest experience such prospects have had to flying is driving. Many of Cirrus’ most significant cockpit improvements were borrowed from the ergonomics of automobiles, such as the seemingly simple addition of armrests. Yet, in addition to creature comforts, Cirrus does a great deal of marketing to entice would-be pilots, especially those who could benefit from plane ownership for business and pleasure.

As Cirrus CEO and co-founder Alan Klapmeier puts it, “We provide people with time in a neat little package called an airplane.” When you consider the safety and speed of flying compared with other modes of transportation, Klapmeier’s correct. After all, what entrepreneur would not want to fly from San Francisco to Los Angeles in his or her own plane rather than slog through traffic for hours? How about tossing the golf clubs in your own plane and flying 500 miles to a course, then returning home for dinner? Or who wouldn’t want to take a quick flight to the Bahamas for the weekend, without having to deal with the hassles of large airports or massive cruise lines? And when you consider that the entry level price point of Cirrus aircraft is $189,000 with a monthly payment of $999 – comparable to the H2 many high end automobiles – and that the company is developing programs to allow fractional ownership of its planes, the appeal becomes more real than fantasy.