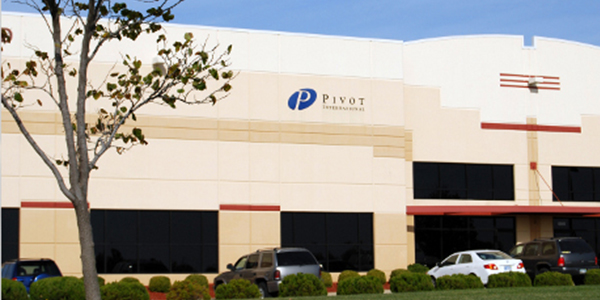 Giving clients a competitive edge
Pivot’s business model is based on the premise that outsourcing makes the most sense for certain companies under certain circumstances. “Just about everyone outsources legal work or IT, and some even outsource portions of their human resources work,” says Kirk Douglass, president. “Clients who turn to us usually are very strong in sales, marketing and distribution. They might have some very bright development people on staff, but they typically don’t develop products every day. That’s where we fit in.”

Once a company has identified and defined what the new product will be, Pivot determines how to make the product cost effectively and will design a user interface. “We make sure of its manufacturability so we can produce a real product that can start generating revenue for the client right away. Rapid-response commercialization is our core competency,” says Douglass.

Most companies don’t produce many new products a year; it’s more common to produce one new product every two or three years, says Douglass. “I see it a lot. In-house engineering staffs are pulled in several directions as they put out fires in production and manufacturing while trying to appease marketing and sales.” Rarely are in-house staffs given the incentive to focus on new products, which Douglass says is a major problem. When a product eventually does come out, it can be too late. “By the time it gets to market, they have a ‘me-too’ product. I’ve talked with some CEOs who’ve had delays of up to three years, in which case it’s not only a me-too product but a too-late product as well.”

Beating the competition to market
Getting a product to market on time can mean life or death to a company, especially in the fast-changing world of electronics. “So we’ve developed a method to get products developed and out the door within very tight due dates using our proprietary Pivot Process, an advanced form of concurrent engineering,” says Douglass. Within this process, the U.S.-based project manager is the No. 1 individual responsible for coordinating every aspect of the project to keep it on schedule.

Pivot manufactures offshore, passing low-cost savings on to its clients. “Our employees in our Philippines manufacturing plant are highly motivated and have excellent training and backgrounds,” he says. Working in the Far East since 1985, Douglass notes that Pivot understands the culture and has very few problems with cultural or communications issues, a serious challenge for first-time offshore manufacturers. Offshore, the wage rates are very good and flexible, and a skilled workforce always is available, meaning Pivot can gear up its plant quickly. The company’s ability to respond rapidly to client needs was demonstrated when it assisted a U.S. company with the delivery of voting equipment to the government of Venezuela. “It was an order far larger than our client had ever had before and they were not properly equipped to handle it from a manufacturing standpoint,” Douglass says. “They typically produce about 50 machines a week. The order re-quired 7,300 machines in less than 100 days.”

Realizing it could not deliver the order in the allotted time, the company contacted Pivot. “Some of the parts had lead times longer than the deadline, so we designed and built replacement parts that could be produced in time without compromising the integrity of the machines,” Douglass says. “Our global sourcing team had to scramble. We purchased electronics and hardware in the U.S., power supplies and PCBs in Taiwan, displays in Japan, and labels in The Philippines. In all, we procured more than four million parts.” Douglass reports the voting machines were delivered one week ahead of schedule.

Protecting intellectual property
One challenge facing Pivot is getting companies to understand not only the cost-effectiveness of outsourcing but also the in-herent safety of doing so. “There is a growing awareness in the industry that outsourcing product development does not necessarily mean you lose control over your intellectual property, which is your company’s jewels,” Douglass says. “There are legal ways for our clients to protect themselves and we show them how and what can be done to protect their intellectual property. You live on your reputation in this business, because if I ever had a problem with integrity, it could literally ruin our company.”

Delivering ISO quality around the World
Outsourcing product development has been slow to catch on, but it’s on the upswing. “There is a growing awareness in the industry that outsourcing product development does not necessarily mean you lose control over your intellectual property,” Douglass says. “There are legal ways for our clients to protect their companies’ jewels and we show them how. We work confidentially with industry leaders around the world. Every Pivot employee diligently controls proprietary information to safeguard emerging ideas and products.”

Although the company was formed in 1994, Pivot’s roots are well established. Founded in the 1970s as Applied Resources, the small contract product development and manufacturing firm developed a variety of new products, from gold-flashed wireless electric blanket controls to state-of-the-art anesthesia monitoring equipment. The company was bought by Allegheny International in 1984 and in 1987 sold to Pittsburgh Plate and Glass as part of PPG’s biomedical systems division. When PPG was ready to divest this division, Douglass and a partner negotiated a buyout, forming Pivot International, Inc. ”I’ve had some employees with me since 1983,” Douglass says.

ISO 9001 certified with four offices worldwide, Pivot is well positioned to deliver quick, cost-effective solutions to its clients. The Kansas facility of 20,000 square feet houses corporate and primary design offices (employing 50); the 10,000-square-foot facility in Taipei, Taiwan, houses engineering and purchasing procurement operations (employing 40). All of the company’s manufacturing is done in its 62,000-square-foot facility in Manila, The Philippines, with a workforce of 200 to 500, depending upon the needs of Pivot’s clients; and the Dortmund, Germany, sales office rounds out the global complement of operations.

Over the last two years, Pivot has enjoyed just under 100-percent growth. ”We’ve gotten more aggressive in our sales efforts within the last 15 months or so, letting people know who we are and what we can bring to the table to help them,” says Douglass. Pivot aims for a consultative partnership with clients who need mass-volume manufacturing in the range of 5,000 to 10,000 units per year. The best fit for the company is a client that needs help with electronics, mechanical design, displays and plastics. Increasingly, companies are seeking sources for competitive solutions. ”Pivot International is probably among the vanguard of a group of companies offering new product development and manufacturing services to firms that want to thrive in the global marketplace”, Douglass adds. “Our core competency is getting products developed, manufactured and on the market as quickly as possible.”