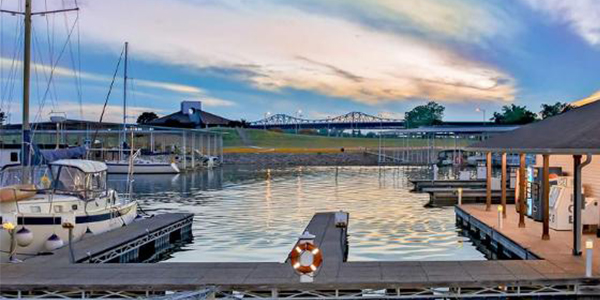 In 1981, the Goldstar Company became the first Korean company to build in the United States, choosing Jetplex Industrial Park at the Port of Huntsville, Ala. At the time, the company didn’t realize it would be a part of one of the Southeast’s most dynamic international trade facilities 25 years later. Now known as LG Electronics, it is one of more than 60 companies currently thriving at the Port of Huntsville, along with countless others benefiting from improved turnaround times, greater cargo capacity and ease of access for travelers from this multi-faceted port facility.

The birthplace of the space program in the 1950s, today Huntsville is an aerospace and defense mecca, housing every major defense contractor in the world in a city with a population under 350,000. With more engineers per capita than anywhere in the country, Huntsville is a prime location for major companies to do business. To export the fruits of its brainpower, the city relies on its expanding port as one of the most important centers of economic activity in the Tennessee Valley Region: the port impacts over 12,000 jobs and generates $714 million in payroll, according to the 2003 Economic Impact Study by the Port of Huntsville.

The past year has seen a period of unprecedented growth at the former cotton field, which is now a three-part port operation comprised of the Huntsville International Airport, International Intermodal Center and the Jetplex Industrial Park. With more than $87 million in renovation and expansion projects recently completed and ongoing at the facility, the Port of Huntsville is offering improved service for tenants and users alike.

The Huntsville International Airport serves approximately 1.2 million passengers annually with five airlines and 10 non-stop destinations. In 2005, Huntsville International Airport began a multi-phase terminal area improvement project (see sidebar), and in September, U.S. Airways launched a new low-fare program out of Huntsville offering lower fares to 24 cities around the country. With fares as low as $84 for advance purchases and $147 for walkup, U.S. Airwaysÿhas made Huntsville an inexpensive alternative departure point for cities including Chicago, Philadelphia, Dallas, Denver and Boston and a desirable location for inbound travelers.

The airport also handles the only scheduled international flights in Alabama, making it an essential international cargo gateway. The recently completed $31 million extension makes the facility’s 12,600-foot runway the second longest in the Southeast, long enough to accommodate a fully loaded 747 freighter, with plans in place to allow for the arrival and departure of the new Group IV aircraft. Along with a new air traffic control tower presently under construction (which will be twice the height of the existing tower), Huntsville International can accommodate planned future growth and development for larger aviation related industries needing direct runway access.

Quick and efficient
Domestically, the Port of Huntsville serves as one of the Southeast’s most attractive shipping and receiving cargo destinations with quicker turnaround times than other regional airports, including Atlanta’s Hartsfield-Jackson International. The International Intermodal Center (IIC) serves as the multi-modal freight hub for the entire Tennessee Valley region, and is home to logistics tenants that include UPS Supply Chain Solutions, DHL, Panalpina and Eagle Global Logistics. Users of the Port of Huntsville have access to air, rail and highway transportation services as well as the IIC’s air cargo center consisting of two 100,000-square-foot warehouse buildings with studies underway for the addition of a third facility of equal size.

In addition to providing a gateway for shippers and travelers, the Jetplex Industrial Park provides tenants a permanent home at this logistics and travel hub. Jetplex Industrial Park has been a part of the Port of Huntsville since its inception in 1967, and today hosts more than 60 companies including Boeing, Siemens VDO, Raytheon and International Diesel of Alabama, as well as LG Electronics. Home to Foreign-Trade Zone 83, the Industrial Park makes it easy for tenants to reach international markets with non-stop flights to Europe, Mexico and Asia. Last year, nearly $87 million in merchandise shipped through Foreign Trade Zone No. 83.

Officials at the Port of Huntsville already have their sights set on the future as current and planned expansion projects allow the facility to further its reach domestically and globally. In 2004, the Port of Huntsville joined with the North Alabama International Trade Association (NAITA) to lead the Globally Competitive Community Initiative (GC2). The GC2 Initiative is meant to serve as a catalyst to build a globally competitive region with sustainable infrastructure to support a continual increase in cargo and passenger capacity.

The new global economy makes quick turnaround times and worldwide accessibility essential for people reaching their destinations and companies reaching their markets. Poised with the strength of expanding infrastructure and a strategic location along the ever growing Alabama automotive and defense corridor, the Port of Huntsville has insured that it will be the preferred point of entry and departure in the region for years to come.

Richard (Rick) Tucker is executive director of the Port of Huntsville, responsible for the overall management of activities under the jurisdiction of the Port of Huntsville including the Huntsville International Airport, the International Intermodal Center, and the Jetplex Industrial Park which are owned and operated by the Huntsville-Madison County Airport Authority. For more information contact Barbie Peek, Director of Marketing at info@hsvairport.org. For additional information visit: www.hsvairport.org.