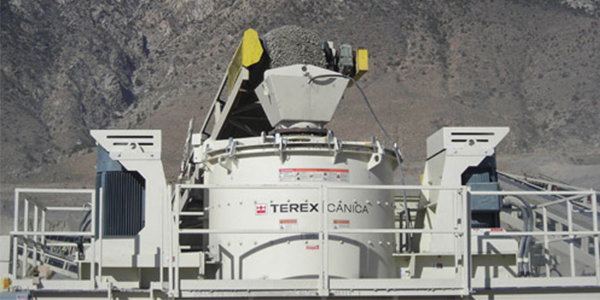 Terex Canica, headquartered in Vancouver, Wash., is a global supplier of vertical shaft impact crushers and has a worldwide network of dealer/distributors. With over three decades of experience behind it, Terex Canica serves the aggregate and construction market, road asphalt manufacturers and even the precious metal and industrial minerals markets. And it ships all over the world, to Australia, Eastern Europe, China, Russia, South America; in fact, more than 30 percent of the company’s sales are overseas.

The powerful Terex Corporation purchased Canica in 2001, which propelled the company into myriad changes for the better. “Our affiliation with Terex has been great. We’re proud to be a part of the Terex family,” says Mike Schultz, the company’s operations manager. “Terex is a company moving in the right direction. The fact that we were purchased and they made an investment in our business to help us become the best in the industry, is evidence enough. The whole process has changed us from becoming a number three or four player to number one. “We can’t help but be excited about what the future holds.”
Terex also helped Canica consolidate a company called Cedar Rapids, Inc. that had its own line of vertical shaft impact crushers. Canica and Terex integrated the best of both in its designs, adding a fair amount of new technology as well. “Our company used to do all the manufacturing in-house. We were very vertically integrated,” says Schultz. “The Terex business model and the consolidation effort allowed us to shut down an underutilized facility and incorporate the manufacturing of our products into another Terex facility. This has made a significant difference to our bottom line.”

New Perspectives
Imagine coming into work one day and finding that your task is to redesign everything your company makes. That’s exactly the approach Terex Canica took in trying to make its products the absolute best. “We went through a complete product redesign a year ago,” says Schultz. “And in that year, we have developed what we feel are the most technologically advanced VSI crushers available on the market today. Now, not only do we have a technical advantage over our competitors, but our business has been around over 30 years, which is considered fairly old in this market, so we have the experience behind us, too.”

Terex Canica took a look at its three design areas: rock-on-rock crushing, rock-on-steel crushing and shoe and anvil (or steel-on-steel) crushing. In 12 months the company designed, redesigned and refined new technology in all three areas. These one-of-a-kind crushers are manufactured in a 200,000-square-foot space in Durand, Mich. It is also the site where Terex Simplicity builds its vibrating screens and feeders. More than 180 employees work in this technologically advanced facility, which is continually being improved. Most capital investments of late have gone toward building maintenance and upkeep; for example, the company is in the midst of purchasing a new paint booth.

Rock, Crush ‘n Roll
The crushed stone industry uses the different rock types found on the surface of the earth as raw material. Each type of rock has it’s own set of characteristics that become huge factors in selecting the proper crusher configuration.

Terex Canica is unique among rock crusher manufacturers in that it spends a lot of time and effort on research and development of equipment and testing of how a material actually crushes. Crushing rock with impact crushers gives a cubical particle shape and high fracture percentages. This is especially important in the road building industry. “Our cubicle product shape makes for a much more solid road base and asphalt material,” Schultz says.

Terex Canica crushers are known for getting results. One example of this involved a local customer who had a problem with waste, or overburden, after processing his product. “He was left with 300,000 tons of pea gravel he didn’t know what to do with,” says Schultz. Through testing at the Terex Canica facility (the company has a full size test crusher) the problem was solved. “Through testing and working on it with them we provided them with a crusher which could crush up to 400 tons per hour converting pea gravel into a sand product,” says Schultz. “They were able to not only remove their waste but make a sellable product out of it which they market successfully.”

On the horizon, Canica is launching a new pinion gear drive crusher that will be launched in spring 2005. The advantages of the new pinion drive are that it will be a direct drive machine with a significantly smaller footprint and the ability to be mounted on mobile chassis.

The company’s new rock-on-rock rotor designs are also proving themselves in the industry. This highly sophisticated configuration has many technical advantages over other models. There has also been a minimization of the wear on the parts inside the unit itself. In most cases our rotors have about half of the parts of our competitors. “The ease of maintenance on this machine is terrific,” says Schultz. “Our engineers designed it in such a way so you no longer have to remove the rotor from the machine for maintenance. This machine features a side loader wear tip design that enables the end user to change out the most frequently worn parts in just minutes, a process that used to take hours.”

Crushing Success
First quarter sales are showing that Terex Canica’s shift to its new product line is paying off. “Our new designs and products are being accepted in our industry with open arms,” says Schultz. We are looking forward to a very successful year with our customers.

“The Terex motto for 2005 is ‘Customer Drive in 05’,” Schultz notes. “Our focus is taking care of our customers”. We are doing this by providing our customers with the highest quality equipment at a fair price, backed by rock solid support and service that will ultimately allow our customers to realize the best return on their investment in the industry.”