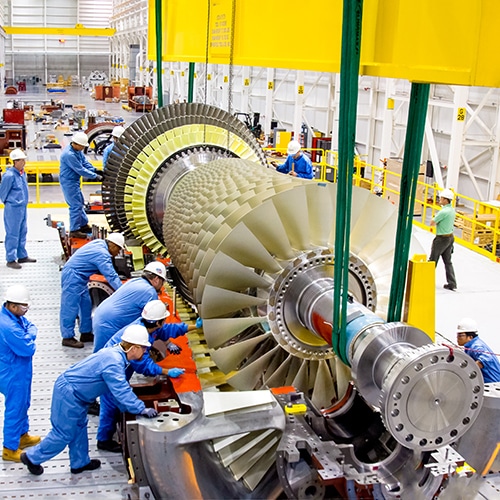 Operating under the new name of Mitsubishi Hitachi Power Systems Americas, Inc., (MHPSA), the merger has led to the development of some of the world’s most innovative and reliable power generation products, services, and solutions for the markets in North America, South America, and beyond.

Bill Newsom, EVP of New Generation Systems for MHPSA, sits down to discuss the factors that led to this powerful joint venture, and expands upon the rapid success they’ve been able to have so far, as they continue to lead the way in delivering energy efficient technologies for some of the world’s most critical sectors.

When Mitsubishi Heavy Industries and Hitachi decided to partner together two years ago, it signaled a new chapter for the world of industry. Two companies whose combined revenues today total more than $160 billion annually, decided to take their nearly 150 years of technology leadership in power generation solutions and come together to create a partnership capable of producing industrial greatness.

The fit between the two companies was like a glove. “The most attractive part of the initial creation of this partnership was the fact that there was very little overlap between the two companies with the respect to their offerings,” says Newsom. On one hand, Mitsubishi Heavy Industries brings along an expert level of proficiency in the development of high efficiency thermal generation solutions, while Hitachi provides state-of-the-art technologies for environmental controls, fossil fuel upgrades, and super thermal power plants.

Adding to this synergy were the companies’ difference in markets they competed in. “MHI excels in the production of large frame gas turbines, while Hitachi specializes in small and mid-sized gas turbines, so when you look at what the two could achieve if they came together, the decision was quite an easy one.”

The result of the merger was Mitsubishi Hitachi Power Systems and operations for the new company were quickly set up all over the globe, including North America. “Our operations in the U.S., known as Mitsubishi Hitachi Power Systems Americas—or MHPSA—today consist of an extensive network of manufacturing and service facilities located in Orlando, Fla., Houston, Texas, St. Louis, Mo., Savannah, Ga., and Saskatchewan, Canada,” says Newsom.

Impressive as this comprehensive offering is, perhaps overshadowing this sector are the company’s world-renowned gas and steam turbines they have been able to design and manufacture for the global power generation market. “Because of the joint venture, we’re able to provide an expansive portfolio of megawatt output, from as little as 15 megawatts, to as high as 327 megawatts,” he says, adding, “It’s a full product range that allows us to satisfy nearly every product need our clients may have.”

For gas turbines, MHPSA offers a F-, G-, J-, and H-series models, and Newsom says all of them are driven by a focus on two factors: efficiency and reliability. “Even in today’s world, with the price of gas being as low as it is, higher efficiency gas products used within combined cycles are beginning to pay off in 20-30 year net evaluations, and as users see these long term benefits, they find themselves increasingly driven towards selecting the most efficient machine out there.”

Regarding reliability, Newsom points to the volatile weather conditions that have occurred in recent years in the United States, and its impact on power generation rules and regulations across the country. “Looking at events like the polar vortex in 2014, there was a huge issue involving power generation companies not being able to perform when called upon,” he says, adding, “Now, you’re seeing penalties dished out to these companies, where the fines can total as high as 25 to 30 million dollars, so the presence of a reliable turbine has become quite the necessity.”

Driving Innovation
A large part of MHPSA’s ability to deliver on these two areas stems from what is a comprehensive research and development presence conducted at the company’s headquarters in Japan.

Newsom says the company maintains a rigorous approach to the design, development, and testing of both entirely new products and enhancements made to existing units. “Our company is always looking to increase efficiency of our products,” he says, acknowledging that biggest driver of such is a turbine’s firing power, which they have been able to make significant breakthroughs over the years. And that’s saying something given the complex nature behind the design and performance of such.

For example, while increasing firing power means increased output and efficiency, such changes put much more stress on the blades, leading them to melt. In order to avoid this, the turbine must have proper thermal barrier coatings, as well as state-of-the-art type cooling flow passages so that the turbine’s metal temperature remains lower than that of its gases’. It’s a balance that is complex and extremely difficult to achieve, but one that MHPS has mastered through its exhaustive commitment towards research and development.

Newsom says that their turbines are expected to operate for over 30 years, and in order to ensure they are making a product capable of such, the company puts each product model through an extensive evaluation process involving thousands of hours of performance tests under real world demand. “At our design and test facility in Japan (T Point), we actually have a fully operational power plant that we use to observe and study the performance of our products, something that is a huge advantage in our ability to ensure that the end product is exactly how we and our customers want it to be” he says, noting that they have had an J-series turbine in operation at the power plant for the last five years.

M501J-Series
Speaking of the J-Series, it represents what is perhaps the best example of MHPS’ commitment to efficiency and reliability. Officially named the M501J gas turbine, it is the most advanced gas turbine currently in operation anywhere in the world, with a design based on the proven G-Series gas turbines, improved 3D compressor blades, advanced combustor cooling, and state-of-the-art thermal barrier coatings.

What makes it so special, however, is that it was the first, and (to this day) only turbine in commercial operation capable of achieving 1,600°C (2,912°F) turbine inlet temperatures while delivering efficiencies that approach 62 percent in a combined cycle mode. As for its reliability? “There are 17 operating J-Series turbines that have collectively exceeded 185,000 operating hours, and, more importantly, they have already achieved an ORAP reliability record matching our M501G fleet of over 99 percent,” says Newsom.

It’s an impressive product any way one looks at it, but as in accordance with MHPS’ commitment to continuous innovation, Newsom says they’ve already developed the next generation of the J-Series and are currently running performance tests on it. “We have begun testing on the next version of our J technology, and with the new version, we will be switching from steam cooled to air cooled,” he says adding, “The end result will be increased firing temperature, output, while lowering overall emissions.”

But for now, they’re excited to be in the present, as they recently celebrated the shipping of their first U.S.-manufactured M501J gas turbine. The turbine, which is to go to Oklahoma’s Grand River Dam Authority where it will provide power to 75 of the state’s 77 counties beginning in 2017, is the 11th turbine shipped out of the company’s Savannah factory and Newsom says he couldn’t be happier with how smoothly manufacturing has gone in the U.S. since they began operations two years ago.

“Before settling on Savannah and our other locations, we ran an extensive study to decide on a location that would provide us with the following: availability of all modes of transportation, close proximity to a diverse supply chain capable of delivering highly engineered components and materials, presence of a skilled workforce, access to higher education institutions, and the existence of greenfield sites capable of housing what is a highly innovative operation.”

With Savannah, they found all of it.

And in forming this joint venture and bringing their business to the Americas, MHPS has effectively found itself quickly climbing to the top of one of the world’s largest power generation markets, with no signs of slowing down.