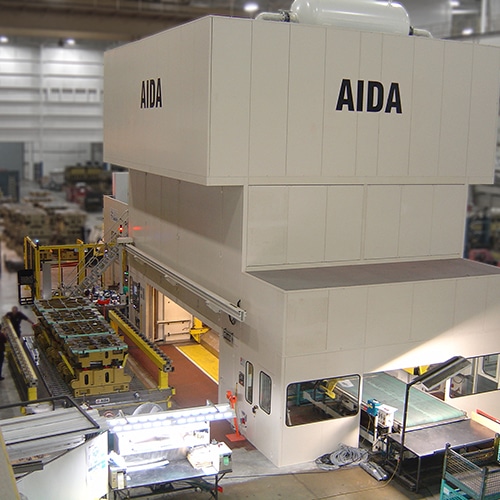 Aida Engineering is the premier global manufacturer of metal stamping presses. It has taken the lead in developing new and innovative metal forming solutions. AIDA-America builds on a nearly century long tradition.
Product quality, industry leadership and innovation are hallmarks.

Based in Dayton, Ohio, AIDA-America is an important extension of an international organization seeking to expand global footprint.

Established in 1995, AIDA-America reflects its parent company’s corporate mission. It engineers and develops the most sophisticated metal stamping press technology. It’s a subsidiary of AIDA Engineering, which was established in 1917 in Tokyo, Japan (today, the company is headquartered in Sagamihara).

“Before 1995, AIDA sold equipment in the United States since the 1970s, but on an import basis, and with a small sales and service network,” recalls Bob Southwell, AIDA-America’s vice president, sales and marketing.

Under his watch, he built facilities around the world. That led to an idea that became reality: the creation of AIDAAmerica in 1995. “Two years later, the Dayton facility was up and running,” reports Southwell.

“From the very small to the very tall – from 30-ton machines to 4,000-ton presses, we build upon our foundation,” reports Southwell. Many industries benefit, automotive in particular.

“Major OEMS, the Tier 1 and 2 suppliers – that’s who we work with,” says Southwell. “Specifically, we supply the press lines that make both outer skin panels and internal frame components – essentially anything in a car that is made of metal. Car manufacturing is complex. Our wide variety of presses fit well, and into many industry segments.”

Facility Investment
It all happens within a 160,000 square foot Dayton facility situated on nearly 50 acres of land. This plant includes a recent 17,600-square-foot welding and fabrication shop addition.

The multi-million investment price tag proved timely. “We needed to grow the facility to meet market needs and, as it turned out, the expansion was completed in 2008, just in time for the domestic and global economic downturn,” observes Southwell.

Recent investments include large-component welding (in house) and increased large component machining capacity – all complementary to overall organizational production capacity. “The US facility is but one of seven global facilities,” says Southwell. These facilities include Japan plants, two facilities located in Italy, and locations in Malaysia and China.

“That enables us to go from the very small to the very large. In the US, AIDA focuses on the larger, and that means that automotive and the appliance industries,” says Southwell. “But all facilities are tied together, as far as technology.”

In the process, AIDA-America’s plant has become regarded as a world-leading advanced stamping press manufacturing facility. Engineering, manufacturing, service and support characterize the enterprise. Indeed, the company partners with customers to come up with flexible production systems and new technologies to meet changing part requirements. This enables clients to realize a robust competitive advantage. “We identify production requirements and evaluate the most effective and efficient solutions,” says Southwell.

Advanced Technology
You can’t talk about AIDA without mentioning its servo press line, developed to enable the deepest draw forming of automotive body panels at the world’s highest productivity levels previously not possible with a conventional press line. To satisfy contradictory requirements of deep draw-forming and higher productivity, conventional die design concept of modifying the dies to match the production line through trial and error was discarded and a revolutionary press production system was developed, the company explains.

This maximized press forming requirements and the panel conveyance motions for each part being produced, resulting in high-precision integration with the dies. In turn, this enabled high-
efficiency production of deep-drawn body panels and unparalleled short startup lead times for new models. The company plans to deploy this production system and this press line to manufacturing plants around the world. Indeed, it envisions it as a new standard – the “next generation” press production.

Describes Southwall: “At the OEM level, our big customers – Honda, for instance – use a high-speed servo called Tandem line that manufactures all of the outer skin components for the Honda Accord, the hoods, doors, trunk lid, and car sides.”

A much larger segment, he continues, involves the Tier 1 suppliers, or direct suppliers to OEMs, as well as Tier 2 suppliers.

It’s a complex picture, he concedes, but a positive one, representing opportunity. “Changes in servo presses and a lot of the materials have become a huge opportunity, as the recent effort has been to drive the weight down on the car to improve fuel efficiency.”

Materials – high strength steels and aluminums – while very light are hard to form. This is where the company’s capabilities come into play. “A servo press makes it easier to control the stroke and the forming cycle,” says Southwell. “The user is more able to form the material into the appropriate shape. That has opened up opportunities in specialized markets: making the transmission, drive trains, clutches, seating components, and so on.”

He adds: “Our technology translates into other sectors. Automotive is our biggest. Appliances come next, particularly because of stainless – and also because shapes have come to the market. We also do a lot in the appliance and electronics industries – we are seeing a lot of growth in terms of much more multidimensionality, shape for instance – much more so that what we grew up with.”

It continues from there. “We see opportunities in areas we previously didn’t realize, such as medical and aerospace,” says Southwell.

Future Directions
So future focus areas are evident (e.g., medical devices with titanium-based shells, particularly for pacemakers). Also, within the aircraft industry, this means new specialized shapes made out of titanium and aluminum.

Meanwhile, activity in the automotive sector remains strong. “People are looking to drive the vehicle weight down by as much as 800 pounds,” reports Southwell. “This will involve changing a lot of the materials that comprise vehicles – such as aluminum and high-strength steel.”

He adds the implications. “Materials will become much more complex in their forming. Methodologies have been developed, and with our Servo Pro technology, we were a pioneer. We will continue to be an innovator.”