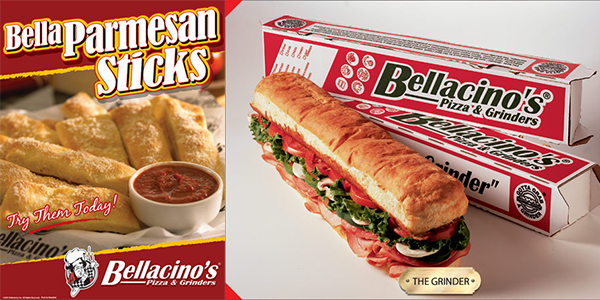 You may have heard New Yorkers or Chicagoans complain that nobody makes pizza like when they were kids. The quality of the cheese, the freshness of the dough, the love just isn’t there anymore. Bellacino’s (pronounced bella-SEE-noz) Pizza & Grinders aims to bring back the good old days with a franchise of fast-casual style restaurants that recreate original recipes from an iconic Midwestern shop, Sammy’s Pizzeria, founded in 1959 in St. Clair Shores, Mich. The by-gone eatery was Sam Mancino Sr.’s and his original recipes for dough, bread, and sauce live on in today’s franchises.

If you’re from the Northeast, you probably know that a grinder is another name for a hoagie/hero/submarine/po’ boy sandwich. A grinder is usually served hot. The name dates back to the World War I era when Italian immigrants ran sandwich shops close to the urban shipyards. Their freshly baked rolls were filled with generous portions of meats and cheeses, then baked and garnished with lettuce and tomato. These super-sized sandwiches were a favorite of the hard-working men who ground rivets on warships. The men were known as grinders and the ever-popular sandwiches bear their nickname.

The essential elements of those great sandwiches – fresh baked bread, quality ingredients like a proprietary blend of cheeses and huge portions – remain the essential elements in Bellacino’s grinders. Favorite grinder combinations include the popular Chicago steak grinder of thinly sliced ribeye steak smothered with mushrooms, onions, cheese, and Bellacino’s own garlic spread; and the Italian combo house specialty grinder stuffed with ham, sausage, salami, mushrooms, onions, green peppers, cheese, lettuce, tomatoes, and mayo. “We have the absolute, top-of-the-line meat, cheeses and vegetables and we will never compromise our quality for a gimmick or profit,” Pesola stresses.

All sandwiches are served hot out of a 500-degree oven so that ingredients are sizzling and the bread crusty (unless you want a cold sandwich, of course.) Of all the great ingredients, perhaps the most important is Bellacino’s bread, made from scratch and fresh baked daily. Other franchises or chains may bake a “pre-formed” and frozen product, that’s not the same as fresh bread.

“The guy on the corner that says he has ‘hot subs’ is making cheap microwaved or toaster oven product. Bellacino’s bread isn’t the same as those frozen bread logs you get at other restaurants. One of our catch phrases is ‘toasted schmoasted; we’re oven baked,’” Pesola muses. “We’re one of the very few chains out there that bakes bread literally from scratch every single morning (never frozen ever). In fact, at Bellacino’s Pizza & Grinders, every customer’s order is “made to order,” never is our food “pre-made” or “par baked” waiting to be purchased.

In other words, it’s like going back in time to Sammy’s Pizzeria. The memory of this great food has been lovingly recreated by Sam’s son, Joe Mancino, who started in the business as a kid folding pizza boxes for a penny each after Sam moved the business to Hillsdale, Mich. Joe also worked in the family bakery (which later developed as a pizzeria). The legacy of the bakery lives on in the bread recipe that Joe replicated. In 1978, Joe and his wife Sandra Mancino opened their own restaurant in Coldwater, Mich.

“That’s where the family atmosphere started that is still prevalent in Bellacino’s today,” Pesola reflects. The business is family run. Joe is the CEO, Sandra the co-founder. Their son-in-law Dan Warnaar is the company’s Franchise Operations Director. Joe’s sister, Maria Losik is treasurer and her husband, Kim Losik, is senior vice president in charge of brand development.

“Outside of myself, it’s a 100-percent family run company,” Pesola, a former franchise owner, says. But it’s not just Pesola who has been welcomed into the fold. Every franchisee holds a special place at the Mancino table.

“Each time we open a new franchise, the franchisee is literally brought into the Bellacino’s family. We make them feel as if they are a family member. We do not come at them from the corporate angle typically found in other so-called franchise systems. That’s what makes Bellacino’s so attractive to prospective franchisees today.”

The First Shop
Once Joe figured out how to “bottle” and recreate the special recipes, the first Bellacino’s Pizza & Grinders restaurant opened in 1998 in Springfield, Ill. But to run a successful business takes more than a delicious “gravy” as Italian-Americans call their tomato sauce. It also takes great business sense. The details of supporting the franchisees may be as important as the pizza spice blend and dough recipes.

“Bellacino’s is not ‘corporate soup.’ We are hands on in every way, shape, and form. We like to take that experience and transfer it to our franchisees,” Pesola explains. “We don’t’ provide the cookie cutter. Franchisees provide a tremendous amount of input on where they want things and have the freedom to hold on to their entrepreneurial spirit and not have it squashed by a ‘big brother’ corporation. They learn to work within our organizational structure but can also rule the roost as far as involvement within their communities.”

A successful franchise begins with the know-how of running a restaurant and all operational details. Everything inside the four walls of the shop must run perfectly before the franchisee starts building the business outside the restaurant, according to the company’s business approach. “Bellacino’s philosophy is that marketing can create new customers but the well-oiled machine operations of the kitchen and staff retain the customer and keep him coming back.

Because all the operational details are buttoned up and things run like clockwork, the staff is able to shift its focus to the customer. Most telling of all is that Bellacino’s refers to customers as “guests” of the restaurant. “When a guest comes into a Bellacino’s we want to make them feel as if they are part of the family too,” Pesola says. “We want to be the local restaurant that knows their name.”

Here’s what to expect if you visit a Bellacino’s Pizza and Grinders franchise: The restaurant staff greets you pleasantly and informs you about the “made from scratch” menu items offered. “We let them know they’re in an atmosphere that is different from the typical ‘fast-casual’ food chains. That’s what we strive for on a daily basis. We let our guests know that with each visit to a Bellacino’s comes a promise of complete customer satisfaction.”

After taking your order, the staff politely asks for your name in order to identify you in the dining room. Your food is made to order and brought out to your table – staff calls you by name, never by number. Is it any wonder that franchisees come from the ranks of customers? “We don’t recruit prospective franchisees. Virtually all of our franchise units are held by prior guests, meaning a customer invested in a franchise. Why be the best Bellacino’s customer when you can be the best Bellacino’s franchisee?” Pesola proffers.

From Guest to Host
To own a locally owned and operated Bellacino’s Pizza & Grinders franchise, the initial investment runs from about $275,000 to $345,000. Franchises are offered nationwide. So far, most are concentrated in the areas of Detroit, St. Louis, Mo. and Charlotte, N.C.
In terms of competition, the company is confident that great food will continue to stand the test of time. “Competition is going to pop up in any market, regardless of whether you’re battling the quick buffet chains or a toaster-oven chain. We know if we take care of our customers on a daily basis that our guests will be loyal to us.”

The quality and pricing of the menu items are carefully coordinated. “Our price point situation tends to trend right along with the market today. We are not over priced or under priced,” Pesola notes. “Our portion size is larger than any other concept out there. A whole grinder is approximately 18 inches; half is about nine. Each is piled high with fresh meat and cheeses.”

Franchisees are provided with an equipment package, a build-out package with Bellacino’s Pizza & Grinders’ trade dress and branding, and customized plans for each restaurant. The equipment package has evolved from a commitment to use reputable and dependable manufacturers that produce equipment items that are ideal for our needs.

“We have our preferred purveyors across the country. The required purchasing of many goods ensures that Bellacino’s maintains purchasing power from our food manufacturers. In addition to recommended equipment, we have proprietary food items such as our cut of steak for the Chicago steak grinder, our sauce, cheeses, pizza dough, seasonings and proprietary ingredient packets.”

Next up: pasta dinners including spaghetti, ravioli and lasagna dishes that are freshly prepared to ensure a homemade taste. “We feel offering pasta at the same quality of our grinders and pizza that will give customers a broad array of choices for dinner.” Pasta is planned as an upcoming menu addition.

Yet another concept for the company is Bella Creamery, a mix-in ice cream store under development. New franchisees have the option of opening a Bellacino’s Pizza and Grinders with a Bella Creamery in a co-branded style format.

In a way, the restaurant business is coming full circle and returning to the priorities that have made Bellacino’s a success for nearly a half-century. “It seemed as though in the late 1980s everyone wanted to get away from the ‘fast-food’ restaurant and then sandwich restaurants became prevalent but we had already been doing it for years. Now, the landscape of our competition is coming right back to something we’ve had going since 1959. The dine-in, carryout, phone-in casual restaurant is back. People are looking for a comfortable restaurant with wonderful food.”

Next time someone says they don’t make pizza as they used to, send them to Bellacino’s Pizza & Grinders.