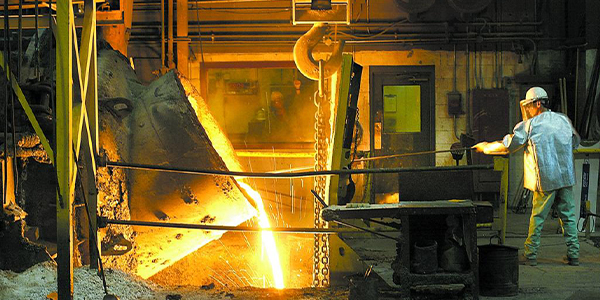 Elwood Haynes was an inventor whose first claim to fame was to make the first gas-engine powered automobile in the U.S. in 1894. His second claim to fame was to start a company in 1912 that today continues to bear his name. Initially the company focused on cobalt-based alloys used for cutlery in the days before stainless steel. The company grew substantially during World War I by supplying cobalt alloys for machine cutting tools. Cutting tools made from Haynes’ cobalt alloys would cut steel three times faster than existing tool steels, which greatly aided the war effort.

Purchased by Union Carbide in 1920, Haynes invented a number of new alloys, and was especially successful with corrosion-resistant alloys. With the emerging growth of the aerospace industry during the late 1930s and World War II, Haynes’ focus shifted to the development of high temperature resistant alloys. The company’s cobalt-alloys were essential to the superchargers used on piston engine aircraft. With the growth of commercial jet airliners following the war, use of Haynes alloys grew rapidly as they were found to be ideal for use in the hot sections of gas turbine engines.

One key early development was the nickel-base HASTELLOY(r) family of alloys, the name coined from Haynes STELLite alloys, which continues as one of the company’s most widely recognized trademarks. HASTELLOY B alloy was one of the first popular nickel-molybdenum alloys used in both corrosion and high temperature applications. One of the more exotic uses was for the rocket nozzles on the Viking I and II vehicles that landed on Mars. HASTELLOY(r) C alloy, a nickel-molybdenum-chromium alloy, was another early invention that gained rapid acceptance in the chemical process and petrochemical industries. This alloy also enjoyed a notable aerospace application, notably the skirts (nozzles) of the huge F-1 and H-1 rocket engines on the Saturn booster, which lifted Apollo vehicles off to the moon. Because of their extraordinary high temperature resistance, many different HASTELLOY alloys have been invented over the years. At one time or another almost every letter of the alphabet has been used in designating HASTELLOY alloys. HASTELLOY(r) X alloy was the start of one of the most spectacular success stories in the history of high-temperature superalloys that contributed to the company’s growth and reputation.

Today Haynes International is a publicly owned company whose shares are held by several private investors. Still headquartered in Kokomo, Ind., where namesake Elwood first set up shop, and still largely serving the chemical and aerospace industries with corrosion-resistant and high-temperature alloys, the addition of “International” indicates that while the company hasn’t strayed far from its roots, its scope of operations has grown worldwide.

“In terms of point of sale, about two thirds of our business is in North America,” notes Charles Sponaugle, vice president of business planning and information technology. “However, due to the fact that our major customers are international in scope and their products are used internationally, probably two thirds of our production is actually used overseas.

These major customers include, from the aerospace industry, Boeing, GE, Pratt & Whitney, Rolls Royce, and France-based SNECMA; chemical giant DuPont as well as major pharmaceutical companies. In addition, Haynes sells to subcontractors who service these industries. One significant offshoot of the jet engine business has been in power generation applications in which land-based gas-turbines require the same high-temperature alloy materials as the flying jet engines.

Unique Service
Haynes has a million-square-foot mill operation at its Kokomo headquarters as well as a 100,000-square-foot service center in nearby Lebanon, Ind. It also operates several smaller service centers ranging in size from 25,000 to 40,000 square feet domestically in Houston, Texas; Anaheim, Calif. and Windsor, Conn. There is also a 125,000-square-foot tubular manufacturing facility in Arcadia, La. Internationally, similar centers are based in Manchester, U.K.; Paris, France and Zurich, Switzerland. Haynes maintains additional sales offices in Milan, Italy and Singapore, and is currently establishing a new service center in Shanghai, China. Worldwide, the company has approximately 1,000 employees.

“The service center concept is one of the things that make us unique in the industry,” Sponaugle says. “Basically, we offer flat products – sheet, coil and plate – and round products, such as billet, bar, wire and tubulars. With many different customers and applications, we supply exact dimensions in small to large quantities cut to the customer’s requirements. Pretty much whatever the customer wants, we can do. No job is too small, or in a size we can’t handle. Our service centers have shears, abrasive saws, waterjet cutters, laser cutters, and bar saws that can be used to produce exacting cut shapes where necessary.”

Further distinguishing Haynes from its competition is that it is the only pure super alloy producer. “We focus on what we do best, and we have invested in the latest manufacturing technology to produce what we do best with the highest level of flexibility,” Sponaugle points out. “Although we also use independent distributors to market our products, we rely primarily on a direct sales force that concentrates on understanding and meeting the custom metallurgical needs of our customers.”

Sponaugle also notes the company’s safety commitment. “From the CEO down to the entry-level employee, safety is our main concern, both for the obvious welfare of our workers as well as to the equally obvious business benefit of controlling costs. This isn’t just the ‘flavor of the month’ kind of program, and we’re not big on slogans and posters. It’s an employee-driven process in which everyone maintains safety concerns at the forefront of everything we do.”

Rising Price Containment
One specific challenge in customer service is controlling prices in an industry in which the cost of raw materials is, well, largely uncontrollable. Says Sponaugle, “Like everyone else, we buy on the open market, and as overall demand has gone up, so have prices. Right now nickel is about $7 per pound, up from $4 or $5. More dramatically, cobalt has shot up from a flat rate of $8 to $9 to as much $25 to $27.”

While end-users have to accept, and absorb, such price hikes, there’s also ways to help them reduce these expenses, notably in reusing the scrap created in the process of forming the final application. “Customers buy sheets of alloys from which they cut and fashion the part they need,” says Sponaugle. “A certain amount of scrap is created that can be re-used and recycled. When a customer obtains a cut part from our service centers, they get maximum value for the scrap generated since we can use the scrap directly in our melting furnaces. We also work with customers who generate their own scrap, often buying the scrap back to be recycled in our next melt.”

The Future Looks Bright
Because it sells to a global economy, Haynes is not subject to the state of any one country’s economy, including that of the U.S. That said, aerospace in general is coming out of a recent slump and Haynes is seeing a rise in demand. “What we’re working on today won’t actually be in use for a few years,” Sponaugle says. “Right now what we’re making for aerospace customers will be fabricated for jet engine parts that won’t be put into actual service until 2006. So what we’re seeing is that the industry is out of its slump and is expecting a healthy recovery.”

Good news for its customers is, of course, good news for Haynes. As a company that averages roughly $200 to $250 million in annual sales, Haynes has recently been right in the middle of this range and expects to rise towards the high end next year. It is also undergoing a financial restructuring to put it into a better position to take advantage of future opportunities.

Although this restructuring has required the company to file under Chapter 11, Sponaugle assures that this is a part of the process in going from a highly leveraged company to one considerably less so. “We continue to make money, and our customers and suppliers and employees all know the Chapter 11 protection was a means to facilitate the financial restructuring. In fact, we filed for Chapter 11 status on March 29 and emerged on August 31, which is one of the quickest Chapter 11 processes on record.”

And this should allay any fears to the contrary that Haynes International remains the major innovator and customer-focused company it’s built its reputation on.