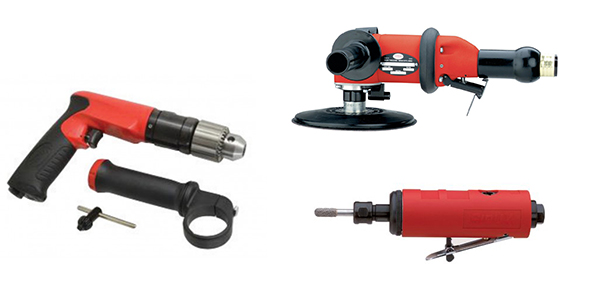 Sioux Tools of Sioux City, Iowa, is a case of the good getting better. Already one of the most powerful forces in the power tool market, the company has reformulated its marketing and manufacturing strategies to make itself a better, more responsive resource for its customers. It has also launched new products and redesigned existing products to make them an even better value for those customers.

Since being acquired by the Snap-on Corporation in 1994, Sioux Tools has pursued growth through product development, improved customer relations and market expansion. Beginning in 1999, several new executives were added to the management team to introduce new blood into the organization. One of the results was Sioux Tools’ new integrated-products marketing concept, introduced to better communicate both the function of the products and the changes at the company to distributors and customers.

The key to this product integration is color. Sioux Tools’ marketing literature now uses color to differentiate its product categories. “Everything revolves around the new colors. Customers become familiar with the visual tie-in of color to product and application,” says Mark Allen, director of marketing. Allen adds that this marketing program also includes a new company logo and new layout for all literature. Catalogues and literature are also translated into several languages, emphasizing the company’s continuing commitment to its international customer base.

The new marketing effort also includes a quick-ship program, which constitutes a new commitment to Sioux Tools’ customers. Says Bruce Thames, director of operations and technology, “We’ve identified our core products to our distributors according to their usage levels, and we offer quick shipments to ensure timely deliver to their customers. For our top products, representing over 65 percent of our sales volume, we guarantee shipments in five days or less. For products at the next level, we guarantee shipments in 10 days or less. We also guarantee 25-day shipments on custom-ordered items. All of this is indicated directly in the new product catalogue.”

This is a massive undertaking for a company that produces nearly 2,800 stock-keeping units of power tools. Nevertheless, Sioux Tools set a goal of 90 percent on-time shipments for itself — and has exceeded that goal. “We have responded to our customers’ demands with the quick-ship program, and it has become an element of our operational fitness,” says John Horn, vice president and general manager.

Power Line
First profiled by US Industry Today in its May 1999 issue, Sioux Tools is now in its 87th year of business. The company has traditionally produced air drills and assembly, abrasive, finishing, percussion and specialty pneumatic and electric tools. Its traditional customer base includes distributors to woodworkers and manufacturers of trailers, boats, manufactured homes and recreational vehicles, as well as aircraft maintenance and repair.

Along with the integrated marketing and quick-ship programs, the company has made other moves in the past two years to increase both the breadth of its product offering and the industries that it reaches. Two recent developments have boosted Sioux Tools’ manufacturing capacity and its product line. The company has opened a facility in Murphy, N.C., to support the existing plant in its headquarters at Sioux City. The Murphy location completes assembly operations on the company’s Sioux and Snap-on branded product lines.

In another move, Sioux Tools recently acquired the Fuji pulse-tool product line from Florida Pneumatic Tools. With this acquisition, Sioux Tools became the master distributor for Fuji brand pulse tools in the United States. The Fuji agreement reflects the current direction of Sioux Tools’ strategy — to further develop current and new markets through the expansion of its product offering. In addition, the company is pursuing other such partnerships for growth and market expansion.

Feel-good Tools
Product development at Sioux Tools also includes work on its current core items. Zeroing in on ergonomics as a critical value-added element, Sioux Tools has reconfigured a number of long-standing products to make them easier and more comfortable to use.

Since beginning to address ergonomics more than 10 years ago, Sioux Tools has increased the range of materials that go into its products. For example, using injection-molded components and designing in thermal barriers helps prevent operators’ hands from becoming cold or hot, which may be a problem in certain applications. Research into new materials and advanced three-dimensional CAD modeling has led to products with improved fit and feel. Many Sioux Tools products now offer better grip materials and reduced noise levels as well.

In already-existing products, Sioux Tools recently released a redesign of the 8000 Series of electric drills and screwdrivers, which includes a unique handle shape called the Z handle. “The Z handle gives good balance to the tool and shortens the head, giving the tool tight access capability,” says Rob Hartman, new product development manager. “In addition to the obvious styling changes, the motor and gear train have been redesigned to improve reliability.”

More Value for More Customers
Both design and product development play crucial roles in marketing power tools in today’s economic climate. “Industrial pneumatic tools are a mature industry,” says Thames. “But we’re constantly looking for ways to improve product performance, reduce cost and improve value to the customer. Along with the ergonomic features, we’re designing motors with greater power and efficiency. We’re attacking the cost front by looking at near-net-shape processes to reduce the number of machining steps, in addition to new materials.”

The combination of integrated marketing, new product development, redesign of existing product and partnerships with other manufacturers has underscored Sioux Tools’ top-level standing with its current customer base. It has also opened the doors to new markets.

“We’re using both our internal design efforts and outsourcing to deliver the best possible solutions to meet our customers needs, and to position ourselves to service new market opportunities,” says Horn. “Our expanded product offering takes us beyond niche areas to a wider range of industrial and consumer markets.”