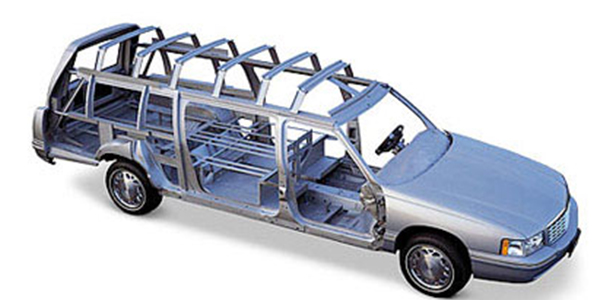 Accubuilt, a Lima, Ohio-based specialty car manufacturer, does not just sell vehicles, it sells class and style. With a product line that includes limousines, hearses, coaches, and paratransit, the company is known for vehicles that are built to be both sturdy and elegant.
“No competitor makes a car quite of that stature,” said Accubuilt’s president Don Cuzzocrea. And it is this stature that makes the company’s hearses a favorite among upscale funeral homes, which led to its vehicles being used for Ronald Reagan’s funeral.

A History of Excellence
Accubuilt’s divisions have a history that is as rich and detailed as its cars. In 1876, William Sayers and A.R. Scovill began the Sayers and Scovill Coach Company, which quickly became known as “S&S.” The business manufactured horse-drawn funeral coaches, or hearses, that became wildly popular because of their superior craftsmanship and design, which set standards for Accubuilt’s products today. In 1923, the Shields family of Lima, Ohio, founded the superior Motor Coach Body Company and soon after began producing funeral coaches. Over the years, both companies grew and evolved with the automotive industry and added limousines and luxury sedans to their product lines. The companies were vigorous competitors and soon outdistanced all others in reputation and sales.

In 1981 the two organizations merged to form S&S/Superior of Ohio and became far and away the dominant funeral vehicle builder in the world. In 1999 the company acquired Eureka Coach, which dates to 1871 and Miller-Meteor, founded in 1915. With all four of the legendary funeral vehicles builders now under common ownership, the company name was changed to Accubuilt, Inc. Each company has a long history of excellence in the specialty vehicle field and had its own unique product features to contribute to Accubuilt’s catalog.

The latest addition to the Accubuilt family is Vartanian, which was acquired in 2001. Under the Accubuilt by Vartanian brand, this addition has expanded the company’s product line into the commercial van market, including mobility/wheelchair vans and shuttle vans, and the company is using the same meticulous manufacturing approach to these specialty vehicles that it employs when making limousines and coaches.

Unquestionable Quality
Accubuilt’s diverse brand names have made the company a powerful force in the car-manufacturing field. No matter how you evaluate the business, whether by market share, design, or quality, Cuzzocrea says Accubuilt is “unquestionably the leader.” He adds, “We’re not bragging, that’s just a simple fact.”

This fact is accentuated by the place the company has earned in its markets – funeral home conglomerates, independent funeral homes, and liveries – in both the United States and abroad. A significant amount of Accubuilt’s business comes from exporting and its products are doing well in foreign markets. In Japan, Accubuilt supplies more products to the funeral market than any other company in the Western world, and in Canada, Accubuilt’s cars make up 75 percent of the market. Cuzzocrea says the business does equally well at home: The company’s cars make up over 60 percent of the U.S. market, which is more than all of its competitors combined.

Transforming Industry
Accubuilt’s quality vehicles are manufactured in the company’s 175,000-square-foot facility – which houses almost 250 employees – and all of the steps of production, from start to finish, are completed there. This is no small accomplishment, since Accubuilt literally reinvents the wheel when it manufactures its vehicles, transforming traditional cars into high quality, classy, specialty vehicles. Completely modifying a car’s structure is a huge undertaking, which Accubuilt is able to accomplish with its innovative technologies. These technologies include two helium laser cutters – a second costing in the area of $500,000 was just installed – that have the precision to cut steel within .005 inches, and climate-controlled paint booths that help enhance the cars’ finish. In order to ensure that each car is designed and engineered to meet Accubuilt’s high standards and special requirements, the company’s engineers use a sophisticated CAD-CAM system, which enhances each vehicle in terms of precision, stability, and safety.

In addition to the company’s technology, Cuzzocrea said another ingredient that makes Accubuilt unique is the fact that most of its products’ parts are mass-produced right at the facility. This means that when a customer needs a replacement, it can be sent literally overnight, whereas most specialty car manufacturers need to make replacement parts by hand, which takes time and can create irregularity.

And Accubuilt’s quality control does not end when the car is made. Right before the vehicle goes out the manufacturer’s door, a quality audit is conducted to ensure that all products meet stringent standards of excellence.

Service Generations
Accubuilt’s superior manufacturing technologies makes the company stand out above the competition, but Cuzzocrea said that it is the customer service and the people that really are most important in Accubuilt’s mission to offer the best quality vehicles at competitive prices, as well as keeping customers fully satisfied. According to the company’s president, part of what makes Accubuilt’s culture unique is that its Midwestern values and traditions are literally passed down from generation to generation, with employees who have had parents, grandparents, and great grandparents working there. In fact, the company’s current staff includes 12 fathers and sons.

Cuzzocrea said that the strong work ethic throughout the company makes his job worthwhile and helps him face daily challenges. “We pride ourselves on our work ethic,” he said. “I come to work knowing we’re the best in our field but that we won’t stay that way just riding our reputation.”

It is through these values that the employees are able to provide excellent customer service, as if they are reaching out to members of the company’s extended family to lend a helping hand. In order to give customers the support they need, Accubuilt has created a dealer network that allows customers to easily get in touch with the company.

Another byproduct of Accubuilt’s company culture is its dedication to making vehicles that are safe for the road, and each car meets or exceeds all applicable safety standards.

Accubuilt takes safety standards seriously, so much so that when the National Highway Traffic Safety Administration (NHTSA) made a rule requiring that all vehicles – even hearses – be manufactured to accommodate child safety seats, the company complied. While it petitioned the NHTSA for an exemption, because this added feature would not be utilized in a hearse, it nonetheless produced more than 1,000 hearses with the required safety precautions. The rule was later amended to exclude hearses.

A Stylish Future
“Accubuilt is currently working in conjunction with Quality Metalcraft, of Livonia, Mich., in developing a luxury sedan based on the sensational Chrysler 300. A project car was developed that centered around a 300 with a six-inch longer wheelbase and a more luxurious rear passenger compartment. Chrysler is currently in possession of the project car and is evaluating the Accubuilt/QMC manufacturing proposal. If approved, Quality Metalcraft would produce roof and door stampings and Accubuilt would manufacture the cars for retail sale exclusively through franchised Chrysler dealers. Accubuilt already manufactures a similar luxury sedan, the Cadillac DES, and has marketed it, exclusively through franchised Cadillac dealers, to some of America’s most prominent government and business leaders.

With these projects at hand, Accubuilt is actively marketing its abilities and capacities to design and manufacture other complex, low volume, specialty vehicles that require OEM quality. There is no doubt that whatever Accubuilt manufactures will be the best because of a history rich with quality and employees willing to learn from the history to move the company forward.