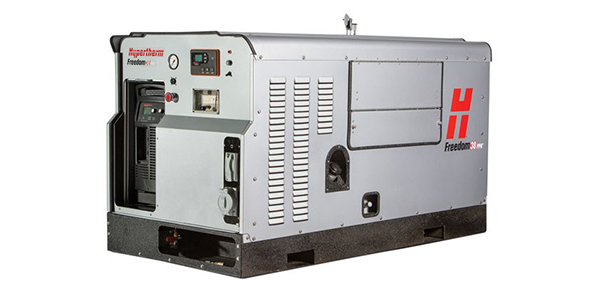 Nestled in the beautiful Upper Connecticut River Valley of New Hampshire and near Dartmouth College is the leading plasma arc cutting manufacturer in the world, consistently maintaining its leadership position through its dedication to its employees and customers. Hypertherm, Inc., believes it employs more plasma engineers committed to research and development than any other company in the worldwide plasma cutting equipment industry, estimated to be between $500 million and $800 million annually.

Born of a Dream

Dick Couch, Jr., and a newly graduated engineer from Dartmouth’s Thayer School of Engineering in 1968 had a dream: to improve the methods of cutting metal while reducing the costs. Hypertherm was born on that dream in a small Hanover, New Hampshire, garage. Hypertherm quickly grew to the international leader it is today with over 500 employees working in the company’s 135,000 square-foot Hanover facility and its affiliate offices throughout the globe.

Hypertherm’s market expansion in the worldwide industry is impressive, with a growth rate over the last five years double that of the market. This remarkable development represents about twice the five percent to seven percent growth for the worldwide industry as a whole. Hypertherm credits much of this success to its continued technological leadership in new product development.

Hypertherm is one of two major plasma arc cutting manufacturers in the Upper Connecticut River Valley, which has earned its reputation of ‘plasma valley.’ “Our competitors in the welding and cutting business focus on other products, but our sole focus is on plasma cutting. That is all we do,” says Couch, president and CEO.

For over 30 years, Hypertherm continually introduced pioneering advances in the metalworking industry, establishing its equipment as the industry standard for superior cut quality and weldability. Companies in North America, South America, Europe, Asia, Africa and the Middle East rely on this industry giant.

An impres-sive 40 percent of the company’s business is in the international market. Hypertherm’s welding sup- ply distributors and original equipment manufacturers are located throughout 60 countries. With subsidiaries in Germany, Italy, The Netherlands, Singapore and the United Kingdom, and with sales offices in Canada, France, Japan and Mexico, it is clear that American ingenuity, dedication, pride in workmanship, and innovation thrive in this company.

“You will find our equipment in a variety of manufacturing facilities, from heavy equipment for farming, construction, automotive, aerospace and shipbuilding industries,” says Dolores Struckhoff, Hypertherm’s marketing communications manager. “The company’s hand-held cutting equipment is found in many types of fabrication businesses and even used in artist operations by sculptors.”

Hypertherm manufactures and markets its plasma arc cutting equipment and services through a network of worldwide distributors and OEMs. Its two-tiered product line includes mechanized and hand-held systems with torches and consumables for both.

Hypertherm is not a company to rest on its laurels. “We believe Hypertherm systems consistently outperform all competitive brands,” says Struckhoff. Its intrepid dedication to advancing its technology to the next level is evident in its number of patents. In its first year of operation in 1968, the company’s first product, the PAC400, set an industry standard. This breakthrough development directed water radially at a plasma-cutting arc, resulting in further concentrating the plasma jet and producing a much higher energy density on the area being cut. The PAC400 was capable of cutting metals up to six inches thick with cut quality far superior to any other plasma system available at the time. This new product was followed by yet another innovation, the HT400®, which was the first commercially successful machine to combine water injection with the use of oxygen as the plasma gas. The HT400® was designed to cut steel up to one inch thick using oxygen and water injection, producing significantly increased speeds and little or no dross.

In 1985, Hypertherm introduced its first air plasma units and its hand-held line was born. A series of new product introductions during recent years has helped Hypertherm become one of the leading manufacturers of both hand-held and mechanized plasma cutting systems. In 1991 the company again transformed mechanized plasma cutting when it introduced its HyDefinition® plasma process, which offered an alternative to laser cutting. This new system, HD1070, provided an even further constricted arc, ensuring smoother cut edges, reduced cut angularity, and more precise tolerances than conventional plasma. Once again Hypertherm pushed the industry to more advanced levels when, in 1995, it improved the HyDefinition® technology on this product and offered the HD3070 with two torch options: one engineered for two-dimensional cutting on standard X-Y tables or punch-press installations, and the other specifically designed for robotics installations.

The company’s continuous advances in technology provide features customers need and have come to rely on from Hypertherm. Customers appreciate the four-times increased electrode and nozzle life, through which they are able to enhance productivity and lower their cutting costs. Consumable parts are designed and optimized for each torch, power supply and application. Parts are subjected to exhaustive systematic protocols, assuring customers that their equipment will deliver optimal life and cut quality.

“Although the concept is not new in business, the team-based organizational concept is new and innovative in our metal cutting industry,” says Struckhoff. This concept is exceptionally efficient in terms of Hypertherm’s management and manufacturing processes. Employees are really associates, underscoring the company’s commitment to each of its workers. The company’s team-based corporate culture encourages collaborative participation among its associates, who are encouraged to submit ideas for improving products and services. Ideas are then posted, processed, and implemented. Teams are responsible for developing team ideas into practicable applications. The level of worker commitment and dedication at Hypertherm is evident in the 2,362 ideas submitted this year, or nearly five ideas per associate. Of these ideas, 1,536 were implemented, representing a 90 percent improvement over last year. The company also encourages customers, distributors and OEMs, and endusers to offer ideas for improvement, so there is a seamless fabric of participation in improvement.

On the manufacturing side of this concept is Hypertherm’s utilization of cellular manufacturing and visual workplace philosophies. The new streamlined manufacturing concept in-corporates a lean matrix of three cross-functional product teams, rather than the conventional organizational matrix that included about a dozen major departments. “This system efficiently enables Hypertherm’s mechanized systems team, for example, to address customer priorities such as technology and reliability without the concern about manual systems issues,” explains Mark Buck, vice president of manufacturing.

The three functional teams include the Manual Systems Team, the Mechanized Systems Team, and the Torch and Consumables Team. “The functional teams include not only the engineers, but marketing and manufacturing so that everyone has input into the design, development and sales and marketing of the product,” says Struckhoff. “Our manufacturing process is very well-organized with no loss in time or productivity. We were also the first plasma cutting equipment company in the country to earn ISO-9001 registration.”

Only the best leaders march with the best associates. Being the best carries with it a responsibility toward and an appreciation for responsible and talented people. Hypertherm understands this better than no one in the industry. The company’s culture of continuous improvement, supported by worker involvement and recognition, has contributed to creating and sustaining its technological edge relative to its competitors. Associates’ ideas and contributions are important tools to the success of the company.

An extremely worker-focused company, Hypertherm recognizes employee value beyond compensation in exchange for time. Last year the company paid bonuses equal to 29 percent of base salaries to more than 400 eligible associates. The company contributes three percent of total payroll to continuing education and profit sharing. Hypertherm is also committed to a no-layoff policy and has held firm to this commitment since its incorporation. Such efforts did not go unrecognized in the New Hampshire business community, and Hypertherm won recognition as ‘New Hampshire’s Best Company to Work for in NH’ from Business NH Magazine for 1997 and 1999. Through thick and thin, the company stands by its associates. Back in the late ’80s and early ’90s when there was not much profit to go around, everyone got an envelope at Christmas with a crisp $100 bill in it. Couch hosts monthly lunches and dinners, where associates feel comfortable in offering ideas in information-and-exchange sessions.

“Hypertherm will continue to remain committed to its mission statement ‘to provide customers worldwide with the best quality cutting equipment and services in the world and to provide for the development and well-being of our associates,’ ” says Phil Winslow, vice president of sales and marketing. “We will continue to provide plasma systems and consumables that give our customers the lowest cost per foot or per meter of cut.

“Hypertherm remains committed to the continued technological enhancement of plasma arc cutting to service the world’s metal cutting market. This will be accomplished both through the expansion of technical development through application of known technology and in the development of newly enhanced cutting technology. Continued development and recruitment of the best engineers and managers available remains a cornerstone in Hypertherm’s future product development strategy,” concludes Winslow.