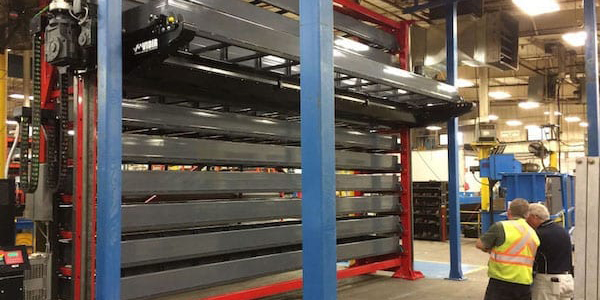 An essential merchandising concept is to sell product “off-the-rack.” Equally important to having stock on hand, it allows the customer to see the way merchandise is displayed. An eye-catching display that makes it easy for customers to browse the wares and get what they want is almost worth its weight in gold.

Canadian display manufacturer Vidir Machine, Inc. would probably prefer to get paid in gold if it could, given that 90 percent of its business is conducted in the U.S. and the current exchange rate of the Canadian dollar is 85 cents in U.S. currency, a significant decrease from only two years ago when 65 cents American equaled a Canuck sawbuck. However, like any business, Vidir has learned to roll with the punches.

Rolling, in fact, is a unique feature of its products. Vidir makes merchandising carousels and displays that store and handle rolled products such as carpeting and sheet vinyl. Go to the flooring department of your local Home Depot and the rugs you’ll see on display are housed on a Vidir machine. Like most innovations, this device was invented out of necessity. In 1985, two Dueck brothers who owned a lumberyard, were looking for a convenient way to store their rolls of vinyl flooring products, but at the same time display it for their customers without having to lug rolls off of shelves. They did what any good sons do, they asked their father, who had operated his own machine shop since 1979, to figure something out. He did: a motorized carousel that became the cornerstone of the company’s success. Sales representatives who visited the store were sufficiently impressed with the unique machine that it created considerable buzz in the industry. Consequently, in 1986 Vidir built its first carousel for resale, and soon thereafter followed up with an advance on the original innovation that truly was cutting-edge: a carousel that not only stored and displayed carpet and vinyl, but also cut it on the spot.

The family business started manufacturing and acquired its first national account, Beaver Lumber, a chain that was eventually purchased by Home Depot (Canada), which recommended the carousel to its U.S. counterpart. Today, nearly every Home Depot store in North America has one or more of these Vidir machines. Vidir employs teams of driver/technicians to deliver the carousels with the Vidir trucks and set them up in the store, which Dueck says takes up about two days to get in and out.

Today the carousel group provides industrial carousels to many of the Fortune 500 companies, including GM, Honda, and others. Each industrial carousel is custom built to meet each customer’s specific requirement and then delivered and installed by Vidir’s trained technicians.

Willows Inspiration
You might expect that the family name is Vidir, for which the company might be named, but it’s not. Vidir is an Icelandic word for willow trees, of which there are copious amounts in Arborg, Manitoba, a city north of Winnipeg, explains Raymond Dueck, co-president and son of inventor Willie Dueck. With about 160 employees and a sales office in Clermont, Fla., Vidir also sells its machines through partnerships with Brockie International Accu-Cut Cutting Machines and Complete Storage Systems Australia. Another major big box customer is Wal-Mart, where Vidir supplies bike racks. Bikes are latched and raised using fluid motion controlled pneumatic springs. The bike carriers can be moved in and out so bikes are not stored directly above an active aisle way, and are well away from customers and store associates. Each level can be accessed independently. Storing the bikes in a horizontal position allows for up to four levels of storage in less than 17 feet of ceiling space. “We are currently producing our patented Bike Merchandising Systems at the rate fast enough to meet the needs of two new Wal-Mart stores per day,” Dueck says. “There’s been a lot of positive reaction to the use of our bike racks and we expect that every store will have our racks over the next several years.”

Another patented product known as “Tug-a-Rug” enables a single person to fasten, raise, lower and remove the heaviest rugs quickly, simply and safely. The machines are manufactured at plants in Arborg and Morris, Manitoba about two hours away from each other. “The distance is unfortunate, but the Morris plant became available at a reasonable price. The Morris plant manufactures the bike merchandising systems and grain storage bins, and specializes in powder coating, a finishing process that is both environmentally friendly and highly scratch-resistant and durable. Each facility measures about 80,000 square feet. Dueck notes that the Arborg plant in particular is currently “bursting at the seams” in terms of production capacity and that some future expansion will be likely. One option he isn’t likely to consider, however, is going offshore.

“It’s true that Asian factories pay something like 5 percent of what we pay workers here,” Dueck says. “But any savings in labor expense is offset by shipping and handling costs, not to mention an ability to monitor quality control on-site. So China really can’t compete, and I don’t see us seriously considering moving our manufacturing offshore. We might source some components, but we couldn’t respond fast enough if we moved assembly offshore.”

Biomass Roll-Out
One that ventures a bit astray of the core product line, but exemplifies the company’s history of uniqueness in applying technology to solve a problem, is the Vidir Biomass fired Greenhouse Gas Displacement System. The inspiration, once again, arises from local circumstances. “We had a neighbor who started building stoves that were fueled by sunflower shell pellets, which cost next-to-nothing. With fuel prices rising the way they are, a lot of people are turning to coal as an alternative to oil and gas, but coal is getting expensive too. So we started to think about what we have here that’s readily available and relatively inexpensive we could use to heat, much as our neighbor was using these pellets,” Dueck says.

Manitoba is farming country, and farms typically can produce a lot of baled straw. “The experts say you can’t use straw as a fuel source because the process of burning creates silica – glass – which tends to clog up the machinery in a furnace,” Dueck says. “But we came up with a technology that eliminates the silica creation. So here we have a cheap and renewable biomass resource that is capable of running at 85 percent efficiency. This makes a superior heat and energy producer ideal for any large-scale operation. An added benefit is the low greenhouse gas emissions compared to fossil fuels.”

While Vidir (www.vidir.com) has the patent on the technology, Dueck concedes that there’s a lot to be done to convince the market on its practicality. “Everybody likes to talk about biomass as an alternative fuel source, but so far we’ve been one of the few with the guts to do it. Right now market acceptance is low, so our challenge right now is to educate people about its potential. Particularly as petroleum prices continue to rise, I think more and more people are going to be receptive to the idea.”

After all, they never thought you could roll out carpet as easily as you can today. It would seem that the practicality of biomass represents a “straw man” that Vidir will easily “rack up” as yet another of its innovative accomplishments.