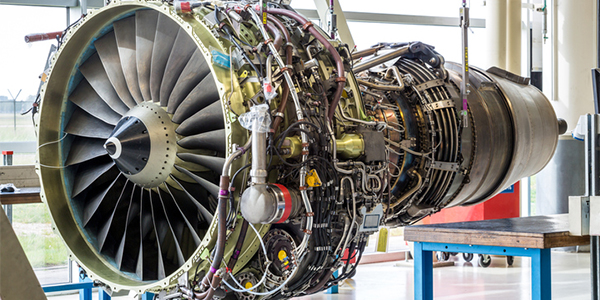 Imagine taking a car in for engine work and having the mechanic swap out the faulty engine with a good one. A pipe dream for automotive technicians is standard practice for the airline industry. It’s just one of the many innovative services AeroThrust pioneered to keep its jet-engine customers up in the air. “You are the customer,” company President Faryt Kalhil explains, “You are king.” AeroThrust’s royal treatment is substantive: “We’ve never had any incidents attributed to our workmanship. And it goes back throughout our history that AeroThrust has never ever sacrificed quality; that’s the hallmark of AeroThrust.”That history began in 1945, when three Pratt & Whitney Aircraft employees founded Air Carrier Engine Service, and got their Repair Station certificate from the Civil Aeronautics Administration, the precursor to the Federal Aviation Administration. As of November 2001, AeroThrust became a division of Windstar Capital, and still focused almost wholly on Pratt & Whitney parts and engines, which in recent years, has consisted of the JT8D engines that power the 727, 737, DC-9 and MD-80.

But no more, Kalhil says: “We just received FAA approval to do all models of the CFM56 for maintenance, repair and overhaul capabilities. So this is a new beginning for the company, a superb accomplishment.” The CFM engines are manufactured by the joint venture of Snecma and General Electric (CFMI) and power the new-generation 737s and the A319s, A320s, and A321s. “There’s a huge number of those engines in operation, and climbing, because it’s the new workhorse of the industry,” he adds. “And that’s great because a lot of our current JT8D customers have transitioned to CFM-powered aircraft. A large percentage of our current customer base will be able to use us for their CFM56 engine maintenance as well. We timed it perfectly.”

Creative Reponses
The events of Sept. 11, 2001 caused tremendous challenges for AeroThrust. With less demand for flights, airlines grounded many of their planes and had little need for repairs because they could swap out their own engines from the many-grounded aircraft. AeroThrust responded by buying surplus inventory and offering leases, trades and other options that made financial sense to the struggling airline industry. “We were able to do it during times in which we had to tightly manage our resources,” Kalhil explains. “It was engineered through great creativity and the right timing. We purchased material and engines at a certain point where we were going to consume them right away. We didn’t have the luxury of buying engines and letting them sit on the shelf. So it was quite challenging, but we had the right team and they got it done.”

The other main improvement, Kalhil says, was reducing the turn-around time for engine service. For example, for the JT8D-200 engine that powers the MD-80, AeroThrust regularly beats the industry average by half, from 60 days to 30, and sometimes gets the work done in as few as 19 days. “We did it primarily through internal process improvements and also through very dynamic materials management. Roughly 70 percent of the invoice is material on an engine. So one of the things we did is we focused very deliberately on buying inventory from those surplus engines and finding or creating serviceable material by repairing it in-house. That allowed us to speed up the process of building an engine, but it also allowed us to do it at a significantly lower cost.” As a result, AeroThrust was able to attract new customers and improve the service provided to existing customers. Kalhil says many new customers are now standing by with Letters of Intent, waiting for AeroThrust to have everything in place for the CFM56. “We’re very fortunate now to have everything lined up for the CFM56 engine at this precise point in time.”

Foresight and Flexibility
Customers can download the current inventory list from AeroThrust’s Web site (www.aerothrust.com) and search through more than 15,000 types of parts. With a rapidly rotating $20 million inventory that includes over a half-million items at its facilities at Miami International Airport, keeping the list current is a result of integrating the sales and purchasing functions into one department. Kalhil says that integration makes AeroThrust’s people a great deal more flexible and more knowledgeable about what the total market opportunities are. “We ended up with a team of people who were not only buying material, they were also responsible for selling it or getting it consumed. So they became highly effective at what they do and they are able to reduce our costs and consequently pass a lot of the savings on to the customer.”

AeroThrust’s flexibility extends to its service options too; for example: with Airplane-On-Ground service, a technician will hop on a plane and service the grounded airplane wherever it is, anywhere in the world. Kalhil is proud of AeroThrust’s partnership with the union of International Association of Machinists and Aerospace Workers. “I bet you there’s no company that has more flexibility than we have. I genuinely feel that we are the benchmark for a management and union partnership. We have a tremendous partnership with our union. They understand the business needs and they are very open-minded and creative to ultimately satisfy the customer’s requirements. As a result, we have machinists, inspectors, cleaners and many others that do disassembly of engines and a workforce that can move to where the work is.”

Quality Customer Care
Past exuberance for customer care meant doing more than the customer wanted; Kalhil calls it “gold-plating engines. We were seen as very expensive. But we re-positioned ourselves and focused on reengineering efforts and process improvements internally to deliver exactly what the customer wants. At the same time, we consistently deliver beyond the expectation on quality and that is what AeroThrust stands for. It’s a fine line to walk. But, in the end, you can never sacrifice quality. It’s just not an option.”

With an average tenure of 17 years, AeroThrust’s people know that everyone has a responsibility for quality and for meeting customers’ needs. Kalhil himself began with AeroThrust as a rework mechanic 20 years ago: “We promote from within, we value employees – we see them as a family. People work together and there’s a lot of teamwork. We look for opportunities to groom our employees and give them growth options. And that’s appreciated. You get that back in loyalty and long tenure, and people who really care about AeroThrust and its customers.”

That loyalty comes across to customers and vendors too, who see enthusiastic employees – not just the managers – plan elaborate events to deliver superior service.

With loyal and flexible employees, new FAA approval to service CFM engines, and great customers and vendors, Kalhil easily admits, “Nothing keeps me up at night.” The upcoming challenge that Kalhil voices is the nicest one to have: “How do we grow without over-growing, in a way that is viable for the business?” In a flash, he answers his own question: “I have a very flexible team and I’m very flexible myself. We’ll do whatever it takes.”