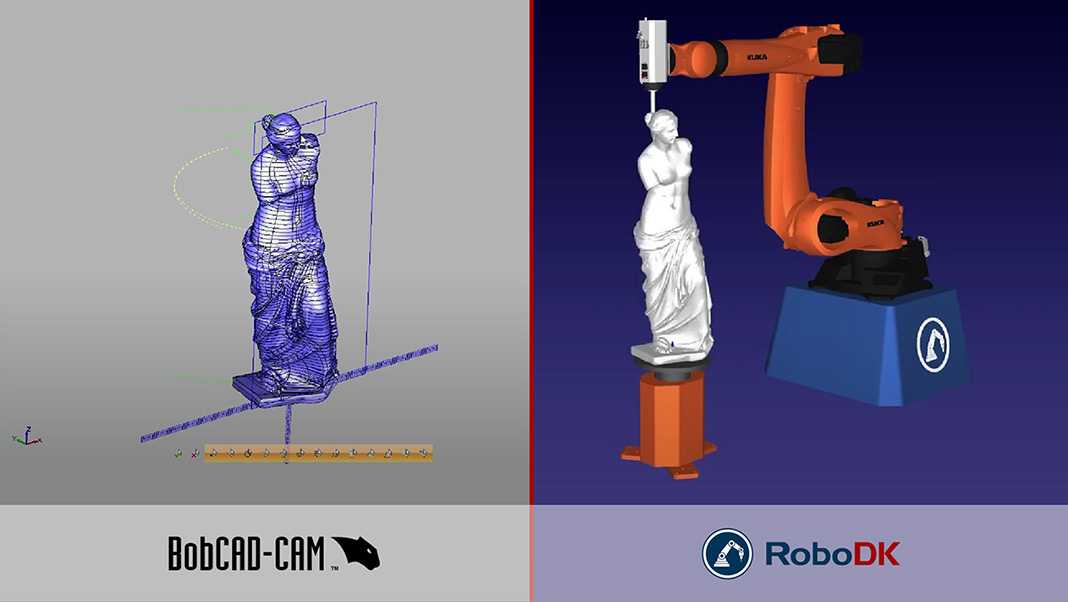 Software providers RoboDK and BobCAD-CAM have announced their partnership by releasing a plugin that allows machinists to program robots. 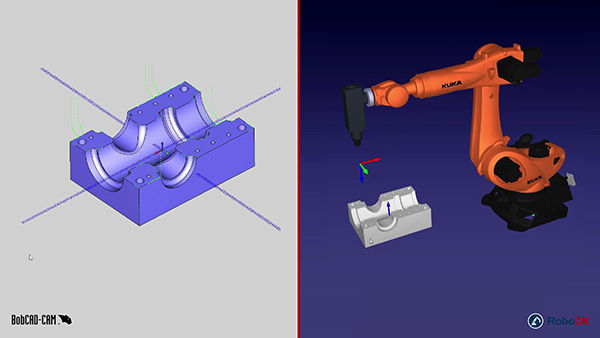 Software providers RoboDK and BobCAD-CAM have announced their partnership by releasing a new plugin that allows machinists to program robots quickly and easily for machining applications. This new tool promises to make robot machining more accessible to machinists and could herald a whole new era in flexible machining for many manufacturers.

RoboDK, a robotics software company based in Montreal, Canada, has recently partnered with BobCAD-CAM, a computer aided design and machining company based in Florida, USA. This month, they have released a new plugin for the BobCAD-CAM software that allows machinists to program robots quickly and easily for machining applications. The two companies hope to make robot machining more accessible to machinists, who traditionally are unfamiliar with robotics and often uncertain about automation.

“The plugin opens more avenues for BobCAD-CAM users to use their software for more applications,” says Jérémy Brouillard, RoboDK’s Product Manager. “We hope that many BobCAD-CAM users are interested in jumping into robot programming. They now have a streamlined workflow with RoboDK.”

For some companies — such as multinational aerospace manufacturers — it makes sense to invest in such machines, which can easily cost millions of dollars. However, the cost and required floor space are restrictive for many smaller companies as large workspaces almost always require a custom machine.

Brouillard says, “When you need that larger work envelope, but you can’t justify the price point of a custom CNC, you can go for robot machining. You can create a huge working envelope, by adding a linear axis to the robot, for a fraction of the price compared to a conventional CNC machine of the same size.”

Robot machining is an increasingly attractive application for manufacturers. It involves using a robot to mill the machining paths instead of a conventional CNC machine. The plugin creates the bridge for machinists to access this new flexible form of machining.

First, robots are much cheaper to purchase and operate, particularly for complex projects. Second, they are much more flexible than CNC machines, as they can be programmed to carry out a wider range of tasks. Third, a single machining robot will use a lot less floor space than several conventional CNC machines.

Increasingly, robots are becoming an ideal solution for manufacturing businesses that want to reduce machining costs and increase machining flexibility.

How the new RoboDK plugin for BobCAD-CAM works

The RoboDK plugin for BobCAD-CAM is now available for all users with both software packages. This powerful plugin combines the robust machining-focused features of BobCAD-CAM with RoboDK’s powerful robot programming features. Users can now seamlessly generate robot machining paths right from within the familiar BobCAD-CAM interface.

BobCAD-CAM is a powerful mechanical design and machining software targeted at machinists. It is available as a stand-alone product or as an add-on to the popular CAD programs Rhino 3D and SolidWorks.

To use the new plugin, users simply install it to their BobCAD-CAM installation. They can then access the main functionality via the new panel that’s added to the BobCAD-CAM user interface. They can send machining paths to the robot at the touch of a button and tweak the robot program within RoboDK if needed.

The future of robot machining

With this powerful plugin, machinists can now easily program robots for a wide variety of machining applications, all from within their familiar BobCAD-CAM interface.

Various applications can benefit from large workspace robot machining. Examples include milling of positives for mold making, large-scale sculptures, trimming of molds, and complex hole drilling. As robot machining becomes more accessible, it seems likely that even more applications will emerge as machinists realize the exciting possibilities of the technology.

This exciting new development promises to make robot machining more accessible and could herald a whole new era in flexible machining for many manufacturers.

RoboDK continues to look for new ways to make robot programming easier and more accessible for manufacturers. They are thrilled to have partnered with BobCAD-CAM to bring this plugin to the market.

Both companies look forward to seeing the amazing things their customers will create with it.

Founded by Albert Nubiola in January 2015, RoboDK is a spin-off company from the highly prestigious CoRo laboratory at ETS University in Montreal, Canada. RoboDK software is designed to bring powerful robotics simulation and programming capabilities to companies large and small and to coders and non-coders alike. Today, it supports more than 600 robots from 50 different manufacturers, including ABB, Fanuc, KUKA, Yaskawa/Motoman, Stäubli, and Universal Robots.