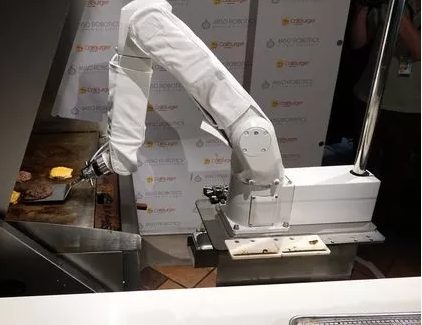 On March 6, the national media descended on the Pasadena branch of Caliburger to cover the world debut of Flippy, the first robotic burger-flipping fry cook.

The initial reports about the event combined lighthearted human interest with apocalyptic forewarnings of human obsolescence. Flippy today…. The fry cook tomorrow? Then the cashier? A year from now, will humans have jobs at all?

A few days later, new headlines appeared, this time sounding almost triumphant: humans had nothing to worry about. Flippy had already been decommissioned.

The official explanation was that Flippy’s human coworkers could neither prepare raw patties nor put fixings on cooked burgers fast enough to meet higher-than-expected demand from curious onlookers.

For manufacturers, Flippy offers an important lesson: robots aren’t going to solve all our problems, either.

Sound familiar? It should. Manufacturers face the same issues. (It’s no coincidence that Flippy, under its white exterior, is actually a six-axis robotic arm manufactured by Fanuc.)

Boston Consulting Group estimates that up to 90 percent of manufacturing tasks are still performed by humans[1]. The exact number varies across verticals, but it’s generally true that humans remain the greatest contributor of value in the factory.

This is why the concept of robots is so attractive. A lights-out factory with no turnover, no injuries, and utterly predictable output? Sounds like a vision!

Don’t look to robots. Look to their enabling technology.

In the face of robot scarcity, how else can a manufacturer address quality and productivity challenges?

The answer is to isolate the digital advances in robotic technology—computer vision, machine learning, connections to factory data sources—and deploy them to augment the existing factory footprint. Especially the human workforce. It’s a judo move: deploying the technology developed for robots to augment human capabilities.

Dr. Prasad Akella led the team that built the world’s first collaborative robots at GM (“cobots”, projected to be $12B market by 2025[3]). He’s the CEO of Drishti, a new company that’s deploying AI to collaborate with and enhance humans on the factory floor.

[2] “Profiles in Innovation Factory of the Future – Beyond the Assembly Line” published by Goldman Sachs Investment Research on 13 April 2016.