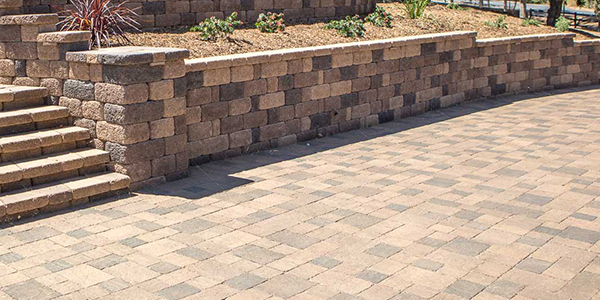 In the early 1960s, while Michael Finch’s friends were playing with Lego’s, young Michael road shotgun as his father Marvin drove forklifts through a yard stacked high with the Lego’s of the real world: concrete cinderblocks.

Today, the younger Finch is overseeing a notable expansion of the company his father built, RCP Block and Brick. RCP comprises six masonry retail centers and a manufacturing facility that produces concrete block, paving blocks and modular retaining walls for contractors, homeowners and dealers. The company broke ground in July 2003 on a new manufacturing facility, part of a five-year, $8 million expansion project that will nearly double its capacity to produce concrete blocks and cement its place as the largest block manufacturer in San Diego County.

Driving the growth is RCP’s focus on reinventing the basic concrete block to meet the demands of a booming southern California building market. But it continues to practice small-company values established by Marvin Finch that aim to ensure that every person involved with the company is treated like family.

“Customers are taken care of the way my dad would want them to be taken care of. Even though he’s not here, his spirit still runs the company. If a customer has a problem, he can always talk to me, that’s the way we want to keep it,” says Finch.

Family Values
RCP Block and Brick was born in the aftermath of World War II, as soldiers and sailors returning from the Pacific through San Diego put down roots in the sunny port city. Their demand for new homes drew Marvin Finch, a veteran of the Army Air Corps into the business of making the concrete blocks that were popular in the construction of Californian homes at the time. After taking orders throughout his army career, Marvin Finch was eager to be his own boss. He formed Revolutionized Concrete Products in 1947, and his two brothers signed on with him. Together they joined the ranks of family operations that supplied San Diego homebuilders with gray concrete blocks, cranked out by hand in the California heat.

In the supercharged industrial growth of the early 1950s, concrete block manufacturing evolved, and modern, larger manufacturers squeezed most of the smaller manufacturers out of business. The Finch brothers adapted by conceding block manufacturing to the big suppliers and focusing their efforts on providing customers with personal attention and a diversified line of homebuilding products from their retail store in Nation City, Calif.

In 1966 RCP joined forces with another family-run shop, La Mesa Block, run by Harry and Jane Chubb and their two sons, Wayne and Gene. La Mesa had survived the consolidation of block manufacturers, and with its plant in nearby Santee, it fit well with RCP. Reborn as RCP Block and Brick, with Marvin Finch as president, the company pushed its way into the San Diego market as a full-service, vertically integrated supplier.

Seeing the new company as a threat, Marvin Finch’s old block supplier stopped selling to him, forcing RCP to upgrade and automate. At the time, RCP had only one old block-making machine, which had to be fed and unloaded by hand. It produced 360 blocks per hour when unloaded by the company’s strongest worker. In 1968, RCP added a new machine from Columbia Machine in Vancouver, Wash. that made three blocks at a time and unloaded automatically, tripling capacity to 1,100 blocks an hour.

Through the 1970s and 1980s, the postwar construction boom in San Diego remained strong. One of the largest concrete block manufacturers left the business, and RCP expanded to fill the void, adding six retail outlets, a second shift to its manufacturing plant and new products to both its block manufacturing and its resale line.

Today RCP Block and Brick has more than 300 employees, with sales of $64 million last year, and 13 percent annual growth. Most of the area’s competing concrete block manufacturers have either dropped out of the business or been assimilated, leaving RCP the largest manufacturer in the area. RCP is now successfully going after the business of larger contractors, supplying blocks for commercial structures, such as schools, office buildings, prisons and stadiums.

The steady population growth in San Diego County has also allowed RCP to mine new business without straying far from its home turf. In addition to standard concrete blocks, the company is manufacturing specialty blocks with sophisticated facings suitable for exterior or interior walls.

By molding two blocks as twins, then cleaving between them with a guillotine-like hydraulic chisel, RCP creates “split block,” which has a rough-hewn textured face that looks and feels like chiseled stone.

The company creates its product line called Regalstone by grinding and polishing the face of a finished block, exposing the sparkly mineral aggregate, and giving a concrete block a finish suitable for stone interior applications, such as building lobbies.

The national do-it-yourself trend has fueled the fastest-growing part of RCP’s business: “mortarless” products that can be installed without a professional stone mason or bricklayer. With new construction spreading into the hills overlooking San Diego, demand for RCP’s segmental retaining walls is growing fast; it now accounts for a full 20 percent of sales. Using a system licensed from Keystone Retaining Wall Systems of Minneapolis, RCP manufactures a combination of interlocking block shapes, some connected by using fiberglass pins and geosynthetic grid, enabling homeowners or general contractors to build even a 60-foot-high retaining wall almost as simply as if they’re working with …well, Lego. This line has opened up new channels in retail home improvement, including Home Depot, which accounts for 8 to 10 percent of RCP’s sales annually.

At 65,000 units a day, RCP’s plant in Santee can’t keep up with demand, so the company has broken ground on a new plant in Otay Mesa, Calif., one mile from the Mexican border. Due to come online in May 2004, the new facility will be built in four stages over the next eight years, producing 25,000-35,000 units a day at first, eventually growing to 100,000 units a day.

Throughout RCP’s history, family values have remained the company’s strongest asset. In addition to Michael, Marvin’s son Tom Finch, daughters Kathy Finch Olsen and Sharon Finch Regano, brothers Chuck and Dick Finch and partner Gene Chubb continue to work there. And of the 300 other employees at RCP, more than 30 have been with the company for more than 25 years; some families for three generations. This has helped the company retain a familial touch that competitors can’t match.

“We behave like the smaller guys, with more personal service, and we pay attention to quality. The company’s still run by the entrepreneurial spirit that my father had, and it’s what makes RCP Block & Brick an outstanding organization. We are all ordinary people doing extraordinary things. ” Finch says.