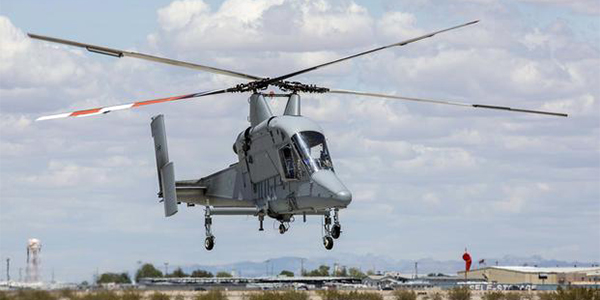 You know the big three automakers, but do you know the big three U.S. helicopter makers? They are Sikorsky, Boeing and Bell Helicopter. Not to be overshadowed, however, is Kaman Corporation, which, with its subsidiary Kaman Aerospace Corporation, is a major assembly and component provider to many OEMs. In fact, Kaman Corporation’s expertise stems from its decades of experience as a helicopter maker in its own right.

“We know how to spell helicopter,” says Mel French, director of marketing and business development. “We design, develop, certify and manufacture the entire helicopter so we know what it takes to develop components.”

It turns out that company founder and aeronautics engineer Charles Kaman and Igor Sikorsky knew each other well. Kaman’s innovations included rotocraft intermeshed rotors to replace traditional main and tail rotors, improve helicopter power control, and make lifting more efficient. Sikorsky did not want to develop Kaman’s ideas, so Kaman started the company with $2,000 working out of his mother’s garage. He soon outgrew that hangar and built a factory in Bloomfield, Conn. (The company today has net sales approaching $1 billion.)

Kaman Aircraft was originally incorporated in December of 1945 as a designer and manufacturer of several history-making helicopters. By 1951, nearly 15,000 combat casualties were evacuated from battle zones to hospitals in Korea on the company’s outstanding craft, praised by Army and Navy brass. The company continued delivery of its HTK-1 choppers to the Atlantic and Pacific fleets. The ruggedness and power of the construction pushed the envelope of performance. In 1953, the HOK-1, a larger craft, was built for the Navy. The HOK-1 saw service worldwide compiling a record of dependability in a range of rough terrains and climates. It soon assumed seagoing duties on aircraft carriers and other Navy vessels. For example, it was used to rescue survivors in case of an airplane crash in the water.

Corporate expansion soon added a new hangar and test facilities. More innovation followed in the same decade when Kaman Corporation developed the Rotochute in cooperation with the Office of Naval Research. That craft could drop supplies and equipment accurately into tight spots. By 1956, the company began to diversify and produced parts for McDonnell Air Force jets and tools for Martin Navy seaplanes, Grumman Aircraft and other OEMs. It was no surprise in 1957 when the U.S. Air Force awarded Kaman Corporation a highly competitive contract for air base crash-rescue helicopters. The result was the H-43B gas turbine powered craft. In the same year, the Navy awarded the HU2K-1 utility helicopter its Bureau of Aeronautics design competition among leading helicopter makers. The company was also contracted to engineer the first Kaman helicopter with a tail rotor configuration, which contributes to high speed.

In 1958, production began on the roomy H-43B gas turbine powered craft with its 1.5-ton payload. It also featured automatic stabilization equipment and other avionics developed in conjunction with the company’s drone programs. It set a world record in July of 1961 by reaching an altitude approaching 30,000 feet, exceeding the Soviet record by 8,000 feet. The Air Force dubbed the helicopter “The Huskie” and used it worldwide for standby alert. By 1959 the company became the first major American helicopter manufacturer to convert to all-turbine production. The HU2K Seasprite debuted the same year.

In 1961, the company developed the world’s first all-composite main rotor blade and had more than 100 Huskies on Air Force duty. The Huskies set world records left and right for altitude and time of climb. In 1962, the Kaman Corporation delivered its Seasprite to the Atlantic and Pacific fleets doubling the range, speed and payload of predecessor craft enabling rescues that were previously impossible. The HH-43B helicopters re-wrote the record books topping the Soviets for distance covered with up to 888 straight-line miles. The aircraft was also recognized for having the best safety record of any helicopter ever in military service. Technical advances also transformed parts, components and assemblies within the aircraft. For example, revolutionary coupling shafts aided power transmission. In 1965, the company introduced a self-lubricating bearing for helicopter controls in a marine environment. It was the type of diverse manufacturing expertise that launched new business units.

“Helicopters are full of bearings and the interest in distribution of bearings has grown into distribution of all kinds of industrial products,” French says. Over half of the company’s revenues come from its industrial parts distribution business, the third largest in the U.S. “Some significant diversification was in order and because of the cyclical nature of the defense business.”

Charles Kaman’s love of music even inspired the company to make musical instruments. He was an accomplished guitarist who gave up the opportunity to tour with Tommy Dorsey in order to go into business. The company makes the Ovation guitar using aerospace composite materials and a round back design inspired by aircraft.

In the 1970s, Kaman reconfigured the Seasprite to create the SH-2, a destroyer platform for antisubmarine warfare and missile defense. It became one of the most versatile new weapons systems added to the U.S. fleet. In the 1970s and 1980s, the company also acquired musical instrument companies, industrial products distributors, and leading-edge innovators in the defense arena, such as electromagnetics companies. The acquisitions rounded out a three-pronged dynamic balancing government, commercial and industrial lines of business.

In 1980, for the first time, Kaman Corporation was commissioned to produce blades for another maker’s helicopter, the Cobra. The company also provided unmanned drones to the Army, which were used as targets and for weapons tests. Helicopter production continued with a contract to produce 18 new SH-2F “LAMPS” for the U.S. Navy. Another big bid was awarded in 1987 for the production of an advanced SH-2G integrating sensor-based warfare systems and GE T-700 engines. The company later received a contract to supply assemblies to McDonnell Douglas for the C-17 transport.

“You really can’t divorce aerospace and defense. Globally, 80 percent of the helicopter business is the military market and the biggest military operator of rotocraft is the U.S. Army. We don’t have a prime platform for the U.S. Army so our strategy is to put ourselves onto product teams for manufacture and upgrade programs in the U.S. military and U.S. Army in particular and we have been successful in that,” French says. “The great thing about Kaman is we still retain a full prime helicopter manufacturer’s capability; whether it be design, certification or manufacture, we can do it with complete support service as well. So we can bring any element or any subset of those skills to the table for a given opportunity.”

Peace Broke Out
Aerospace innovation continued in the 1990s with an airborne mine detection system used in the Gulf War, and a lightweight high-torque permanent magnet motor. Kaman Corporation’s SH-2G Super Seasprite entered service to the U.S. Navy Reserves. On the commercial side, in 1994, the K-MAX “aerial truck” entered service, designed specifically for repetitive external lift operations. It actually lifts more than its own weight. K-MAX was initially used in the timber industry but has clear military potential for resupplying ships and ground forces.

At its two Connecticut facilities, Kaman Corporation has the ability to engineer and produce complex composite structures and high tolerance aluminum manufacturing, in other words, build the entire aircraft. The Aerostructures division, a sister to Kaman Aerospace has two production plants: a sheet metal facility in Jacksonville, Fla., and composites housed in Wichita, Kan. Other aerospace divisions throughout the U.S. work in weapon fuzing, electro-optics, high-powered laser, imaging technologies and other electronic research and development for the company. The company employs more than 3,500; about one-third work in aerospace applications. “There’s a certain critical mass and core capabilities set you have to maintain to be viable in this business. We fight very hard to maintain that,” French says.

Recent contract awards suggest the company is holding its own. In September 2002, Kaman Aerospace was awarded a $67 million contract for major structural components for the C-17 military transport aircraft. Under the contract, the Aerostructures business unit of Kaman Aerospace Corporation will produce 60 ship sets of C-17 ribs and bulkheads in four lots, with 15 ship sets per lot. The contract, awarded by Boeing Airlift and Tanker division, runs through June 2007. The majority of the work will be performed in Jacksonville, Florida.

In March 2004, Kaman Aerospace was selected to supply structures for the presidential helicopter Marine One by Team US101, led by Lockheed Martin and AgustaWestlandBell. The original award to a foreign aerospace company stirred some controversy stateside but the good news is that the work is finding its way back to U.S. shores by way of Kaman Corporation.

Most recently, in January 2005, Kaman Aerospace Corporation received a contract from Sikorsky Aircraft Corp. to manufacture cockpits for various models of Sikorsky’s UH-60 BLACK HAWK helicopter. The multi-year contract calls for Kaman Aerospace’s Aerostructures Division to supply 84 cockpits for Sikorsky’s UH-60L, MH-60S, UH-60M and S-70A model helicopters. The value of the initial contract to Kaman is approximately $27.7 million for production through 2006. The multi-year agreement with follow-on options, if fully exercised, has a total potential value to Kaman of approximately $100 million and would include the fabrication of approximately 349 units.

The contracts represent a trend in the industry for which Kaman Corporation is well positioned. “We see the prime helicopter makers moving away from a manufacturing model to a system integrator model. They are moving up the food chain and getting to be software avionics systems integrators, pushing the manufacture of metal and composite and even the finishing of aircraft out the door to other people who can do it more cost effectively,” French observes. “We are starting to see that’s going to be a good market for us.”