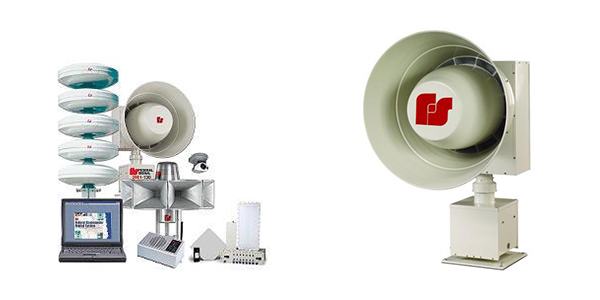 Federal Warning Systems has worked with such notable companies as Siemens in The Netherlands and Davis-Besse in Toledo, Ohio, Kansas and Texas. The company has installed country-wide systems in Kuwait and more than 300 systems in Hawaii alone. Offering a broad range of both electronic and mechanical sirens along with industrial communications equipment, Federal Warning Systems recently joined its sister company, Federal Signal Corporation, in marking 100 years of unflappable success.

“Our core product line has been here since the ‘20s,” says Jon Von Thaden, marketing manager for Federal Warning Systems. “We started manufacturing sirens during World War I and from there, Federal Signal grew into a billion-dollar global company.” The company’s products include electronic and mechanical warning sirens for outdoors, which it markets to municipal governments and industrial concerns. The company also offers outdoor-warning/indoor-tone alert radios and stand-alone warning devices.

“We can supply any kind of industrial facility that needs to warn their people with an exceptional, dependable product. Nuclear facilities, offshore drilling and general manufacturing companies trust our technology,” says Von Thaden. “It’s our foremost goal to be the first-choice supplier of quality life-safety and communication systems to municipal, commercial and industrial organizations worldwide. We are totally devoted to our customers and are always striving to exceed their expectations.”

Doing It All
Just 35 miles outside of Chicago, in University Park, Ill., sits the expansive headquarters of Federal Signal Corporation. With 850 total employees (90 employees under the Federal Warning Systems wing) and more than 1 million square feet of manufacturing space, Federal Warning uses not only auto- insertion and pick-and-place machines to manufacture product, but also surface-mount technology (SMT). “We’ve made a significant investment in SMT and have our own surface-mount area dedicated to Federal Warning Systems products,” says Von Thaden. “It’s incredible technology that’s flawlessly accurate, fast and does its own safety checks.”

As system application specialists, Federal Warning can assist clients step by step through a project, from a free site survey to installation of a two-way system with status monitoring. The company’s in-house systems group has designed hundreds of systems emphasizing industrial and civil preparedness applications. This niche group, which generates one-quarter of the total revenue for Federal Signal Corporation, also has two engineering teams. One team is charged with product develop and continuation engineering. Another does system planning, installation, troubleshooting and training.

“This setup allows us to better meet the needs of our customers,” says Von Thaden. “There’s less conflict of interest among the groups. We needed to separate the responsibility from the guys who were doing new product development, and to let the customer know that the people they’re working with are dedicated to designing. They’re focused on that creative process and they don’t need to change hats midway during a project. It really works out wonderfully for all involved.”

An ECHO Through the Market
Brand new in the Federal Warning Systems product line is ECHO – a digitally based industrial intercom system targeted exclusively to the offshore market, oil and gas, and basic heavy industry markets. ECHO interfaces into PBX and fiber-optic systems for extended distance and paging capabilities. With its explosion-proof headsets, DIV 2 for hazardous areas, four rated for outdoor use and desktop or panel mounts, Federal Warning is sure Echo will be a resounding success.

“We have a sister company in this division, the Communications System division — Federal Warning and Federal Signal Limited — which includes the oil and gas business,” explains Von Thaden. “Because of this partnership, we can sell into that market for North America. We decided we needed to develop a product that better met our customers needs, had tremendous flexibility and functionality, and was basically a plug and play. The ECHO does all three. It has real smarts. The system that we had prior to this had some of the new capability, but it was hard to change functionality. ECHO has an open architecture that allows for much easier functionality, and changes can be made at any station. Plus, all the programming can be done by using a Windows-based software program.”

The idea for ECHO came from feedback the company garnered at the Offshore Technology Conference, a large trade show for the offshore industry. “A year ago, we attended this show and showed the attendees what we had in mind for ECHO,” explains Von Thaden. “We told them this is what we’d like to launch the following year, and they were very helpful in giving us ideas and feedback so we could make ECHO even better. It was a great way to develop a product — to take your idea directly to the customer who would use it, and get their input before the final product is created.”

Federal Warning Systems is a large company that sometimes walks softly. Von Thaden wants all to know that Federal Warning has the industry’s most sophisticated development and manufacturing capabilities. “I think the customers who are familiar with our work keep coming back because they are continually impressed with our abilities and special product offerings. What we want potential customers to know is that Federal Warning Systems is much broader than they might have first imagined. We want them to know that we excel at special products and have the technology in terms of product knowledge, experience and skills to tackle any size project — whether it’s for one community or an entire country. No matter what size the job, we’re here to make sure safety comes first.”