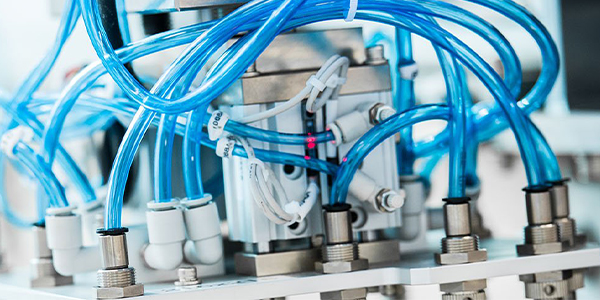 It is truly a function of our global business times that a company founded in Germany in 1849 would extend its operation to Mexico in the 20th century. But global giant Freudenberg saw opportunities “down Mexico way” 30 years ago, establishing a plant in Cuautla that has become a significant player in the company’s rise to number one in the manufacture of automotive radial sealing with a 34 percent market share. In 2004 the North American arm that operates under Freudenberg-NOK General Partnership (FNGP) saw sales revenue grow 11 percent.

“I believe our products and technologies set us apart in the industry and this is because of the way we work at Freudenberg-NOK,” says Oscar Corona, plant manager in Cuautla. “Our manufacturing group is structured in divisions and each division is responsible for business development, and is structured into lead centers and production partners. Lead centers are responsible for product development and developing technical relationships with customers. Our development engineers work very closely with the OE automotive customers and design our products together to fit the customers’ needs. Once those products and new technologies are developed they are launched at the sites of production partners like Cuautla.”

In addition to its highly sophisticated operation, Freudenberg-NOK can also point to a unique structure for its established reputation. As Corona explains: “Our production partners are structured in model cell or small businesses that are aligned to the lead centers where process and products are developed. A key factor in the success of this manufacturing model is the relationship between divisions and lead centers. Our engineers and leaders are trained in the lead centers and over time have established friendly relationships.” As an example, he adds: “Our engineers from Mexico visited the Laconia Plant in New Hampshire and are all Red Sox fans now.”

From tanning to seals
Freudenberg’s roots extend to 1849 when Carl Johann Freudenberg and his partner Heinrich Christian Heintze took over a tannery in the MŸllheim valley near Weinheim after the liquidation of the Heintze and Sammet company. With new, modern products such as patent leather and satin leather, the company grew and exported all over the world. However, World War I, inflation and The Depression hit the company hard. Before then, 60-70 percent of produced leather had been exported, and when the bottom dropped out of the export business it forced Freudenberg’s grandchildren to confront the question: Where do we go from here?

Working with Buna S and Buna N synthetic rubber, chemists and engineers at Freudenberg developed synthetic leather and rubber soles and finally floor coverings and nonwovens, which were originally derived as a further development of the base material of synthetic leather. Nonwovens were soon recognized as universally applicable materials: since 1948, nonwovens have been present as interlinings and marketed under the name “Vlieseline,” while household products are marketed under the name “Vileda” and, since 1957, have been used in a constantly expanding and developing range of filters for industry and the consumer markets under the name “Viledon.” Since 1934, seals and molded products have been custom-designed to special dimensions in collaboration with customers.

Between 1970 to 1989, Freudenberg built up a worldwide network of production and sales locations, including locations in North, Central and South America, Australia, South Africa and East Asia. The product range was also expanded. Between 1962 and 1965, the spunbonded nonwovens process was developed in-house. This technology is now used for applications in medicine, agriculture and the processing industry. In 1966, Freudenberg acquired lubricants manufacturer KlŸber Lubrication, which further complemented Freudenberg’s existing know-how in the field of seals with expertise in tribology.
To enable the company to act and react better, in the late 1980s smaller units were created, each specializing in a specific market. The old parent company Freudenberg was split into independent limited partnerships in 1995. The smaller holding company of the new subsidiaries is now Freudenberg & Co. Ltd.

In the course of innovation, a further step forward was made in product development: today, customers are offered complete solutions, such as radial shaft seals with integrated sensors (“sensor Simmer rings”).

Established in 1989 as the American partner in the global Freudenberg and NOK Group, Freudenberg-NOK has enjoyed remarkable growth since its creation, including a quadrupling of its annual revenues to nearly $1 billion. Says Corona, the company is on track to reach $1.5 billion in sales by 2005.

“The Freudenberg Group must remain broadly diversified; it is this structure that lends it its valuable stability,” Corona notes. “In belonging to the group as a whole, the various business operations gain a special, shared identity that allows them to gear their strategy to long-term planning.”

Many advances
For a company with roots that extend back 155 years there are certain to be a number of milestones, but the three that have most advanced the industry include the company’s leather radial shaft seals and rubber radial shaft seals. Today, the radial shaft seals are made of rubber, TPFE and have electronic sensors that can “talk” and provide important information within the modern and highly sophisticated automotive system.

To remain competitive, especially in light of steel and metals price hikes over the last several years, Freudenberg-NOK has employed several cost-cutting measures; one particularly successful continuous improvement program is called GROWTH, or Get Rid of Waste Through Team Harmony. Additionally, in 2004 the company initiated a program to supercharge GROWTH and boost the participation of associates in improvement activities; the result, says Corona, was that 146 employees (54 percent) completed 18 major (three-day) Kaizens and 350 minor (one-day) Kaizens, saving a reported in $1.5 million (USD).

Such attention to key initiatives has given the company further success; for example, the Cuautla facility has initiated two long-term agreements with Briggs and Stratton and ZF Sachs Suspension. In fact, FNGP was recognized by ZF Sachs Suspension as Supplier of the Year in 2004. “ZF managing director Guido Cattaneo visited our Cuautla plant to deliver the award plate to the associates,” Corona says.

The Cuautla plant also received an award from the Freudenberg Group for becoming ISO-14001 certified and another award for winning a category on the safe machine initiative “We All Take Care” reducing dramatically the number of plant accidents from 16 in 2003 to a one in 2004. “These actions grew our sales by 57 percent in 2004 and will help us grow by 16 percent in 2005,” Corona adds.

Core success strategies
It is apparent that success is achieved in many ways at FNGP and one of the main ways it keeps its focus is through a culture that is devoted to three core processes: strategy, operational planning and talent management. “Strategy is the profile and company we want to create,” Corona says. “Operational planning is how we are going to get there with specifics and financial numbers. Talent management is the key element to assess our team in every business unit, reward and keep good employees, identify high-potential employees and closely follow their development. This tool also provides the opportunity to identify non-performers and take respective action to improve or to reinforce the team.”

“The Cuautla plant,” he adds, “is running in the right direction. Our company has German, Japanese and American influence and this works well within the Mexican culture. I believe that the Cuautla plant is a great example of the success of international business in Mexico. It takes time, leadership, team work, ownership and trust.”