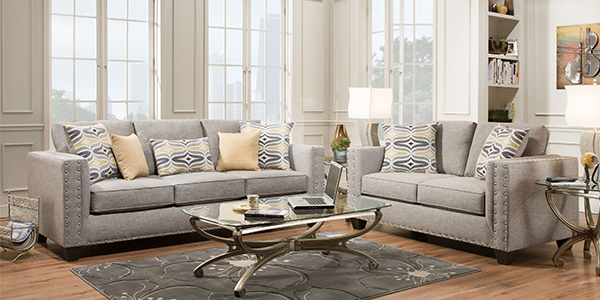 When the doors to American Furniture Manufacturing opened on May 5, 1998, the founding husband-and-wife team of Gerald and Ruby Washington set out to reach $50 million in shipments by 2003. The year 2001 is coming to a close, and Ken Ranager, the company’s vice president of administration, reports that American Furniture Manufacturing’s shipments for this year will exceed $100 million.

To put this kind of success into perspective, one needs to consider the nature of the furniture industry. American Furniture Manufacturing produces upholstered stationary sofas, love seats, chairs and recliners, and markets to retailers, rent-to-own stores and distributors. Furniture is a tradition-oriented industry; the key brands that dominate the market have been around for decades. Plus, selling to the retail community presents its own set of hazards — consolidations, pricing concerns, a reflexive distrust for any newcomers.

In this environment, American Furniture Manufacturing has accomplished the startup-business equivalent of setting a new record by hitting 100 home runs in a season. The company’s products are priced to sell at retail promotional levels: $299 to $499 for a sofa, $99 to $299 for a recliner. “We are one of the few furniture manufacturers in our price points that offer a full-line quick-ship program,” Ranager says. “There are manufacturers in our industry that offer quick-ship programs specific to certain categories such as recliners, but American is unique in the fact that it provides the whole line. All stationary and recliner offerings are warehoused and typically available for immediate shipment. Also, our quality in these price points is very strong. We provide tremendous value, and that goes back to our ability to produce quality at the least possible cost.”

Veteran Team
According to Ranager, this capability stems from both Gerald and Ruby Washington, and from the executives who joined them at the startup. The Washingtons enlisted the services of Dale Gray to assist them in setting up the new firm’s manufacturing processes; Jim Sneed, who created the merchandising and sales strategies; and Terry Austen, who assisted Sneed in developing the sales territories. All of American Furniture Manufacturing’s top executives are veterans of the furniture industry, and all of them knew what it would take for the startup to succeed in the promotional end of the business. The company has added industry veteran Ron Teeter to assist the existing team in sales and marketing.

American Furniture Manufacturing’s product offerings include living room sets with both traditional and contemporary sofas, designed in solid colors, traditional prints and contemporary prints. Occasionally, as in the company’s Style #4700, a recliner is part of the set. Its freestanding recliner line includes both fabric and vinyl upholstery; it’s mostly designed in solid colors, but — as in Style #9900 — also includes pieces with woven details.

As Ranager explains, the quick-ship program has been crucial to American Furniture Manufacturing’s fast rise from the launching pad. Among the many demands retailers make of their vendors is the ability to turn on a dime when extra product is needed. “We keep our complete line in inventory,” Ranager explains. “In most cases, we can fill an order in less than a week, which is one-third less than the industry’s average response time. At times, we’ve been able to fill an order in two to three days. Our goal is to be able to fill an order in just 24 hours, and we think we’ll hit that goal in another year. We try to be a reliable upholstery source to our customers, and at the same time be their warehouse. Gerald would be the first to tell you that we make mistakes, but historically, most pioneers have made mistakes.”

The State of Furniture
American Furniture Manufacturing has established a phenomenal success story in a market that has seen a variety of troubles this year. According to projections from the American Furniture Manufacturers Association, shipments of upholstered furniture are expected to total $10.349 billion for 2001, 4.7 percent less than the 2000 level. This decline is part of the overall malaise in retailing. Softening consumer confidence, higher levels of personal debt and rising unemployment have kept consumers from shopping at the same levels they had been during the late 1990s.

In spite of this, American Furniture Manufacturing continues to draw strength from the commitment of the Washingtons and the other employees at all levels of the organization, and from its location. Its headquarters are located in the northeastern Mississippi furniture-manufacturing region that includes the communities of Pontotoc, Blue Mountain, New Albany and Tupelo (where one of the U.S. furniture industry’s two chief trade show takes place every year).

Rising Value
American Furniture Manufacturing is on a course to increase its already-rapid growth over the next few years, to take an even bigger share of that shipment total. The company recently broke ground for what Ranager describes as a “very large and needed” new manufacturing facility, which will also be located in Pontotoc. The eventual size of this new factory was unavailable.

This year, American Furniture Manufacturing also boosted its product line into a new price category. The company has introduced a sofa set to retail at $499, which Ranager says is the highest level in the promotional price spectrum. “This product extends our existing product lines with the new price points,” he says. “Again, you’ll see styling that ranges from traditional to contemporary. The $499 level is very attractive and attainable for us in terms of manufacturing and shipping.”

American Furniture Manufacturing will also see further growth as the furniture industry as a whole hits the comeback trail. The American Furniture Manufacturers Association predicts that upholstered furniture shipments will rise 3.2 percent in 2002, benefiting from the Bush administration’s tax cuts, low interest rates and falling energy prices. As the business grows, the company remains true to its mission. Ranager says, “The heart of our business is the promotional $299/$399 price point on our sofas, and we recognize that. We will always look to provide our customers with tremendous value at these promotional levels.”