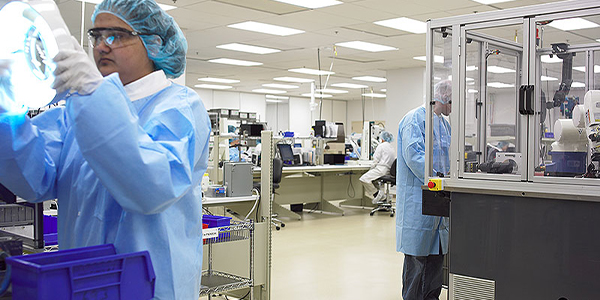 Here are two separate subjects – automobiles and medical devices – whose comparison might seem a contradiction but actually drives home a point on modern invention. Consider: The creation of the assembly line was a breakthrough that brought the automobile into the mainstream for millions of Americans – and made lives easier in the process. The discovery of penicillin saved the lives of people worldwide. Likewise, the devices that have brought about revolutions in medicine – now as ubiquitous as the automobile itself – have also enabled people to live fuller lives.

But in the medical arena the subject of technological breakthroughs takes on a life separate from any other invention that has upped the quality of living and the reason behind this is simple: Enjoying all the rest means nothing unless you have good health.

With roots in battery technology, its broad range of batteries includes lithium/iodine, lithium/CFx, and lithium/SVO cells for various applications, such as pacemakers, cardiac defibrillators, drug pumps and neurostimulators.

Recently Greatbatch, with a 36-year history of innovation, furthered its position with a new line of battery technology called Q. The Q technology, which the company touts as the most advanced implantable medical power source available, utilizes both SVO and CFx materials in a novel cathode structure. The technology can be configured in medium rate for neurostimulator and pacemaker applications and high rate for defibrillator applications. The Q technology provides longer life and more predictable battery performance.

“Our position as a leading developer and manufacturer of components for implantable medical devices and commercial batteries is largely the result of our long history of technological innovation,” notes Laurie Schechter, director of marketing, Medical Power.

“We invest substantial resources in research, development and engineering. Our scientists, engineers and technicians focus on improving existing products, expanding the use of our products and developing new technologies. Our goal is to deliver customer focused growth by designing proprietary solutions into customer applications early in the end-product life cycle.”

Greatbatch, she adds, relies on a combination of patents, licenses, trade secrets and know?how to establish and protect proprietary rights to its technologies and products. As of Dec. 31, 2005, the company had 266 active U.S. patents and 130 active foreign patents, along with 138 U.S. and 306 foreign pending patent applications at various stages of approval. “During the past three years, we have received 106 new U.S. patents, of which 20 were received in 2005,” Schechter notes. “Corresponding foreign patents have been issued or are expected to be issued in the near future. Often, several patents covering various aspects of the design protect a single product. We believe this provides broad protection of the inventions employed.”

A history of invention
A vital and expanding research and development effort combined with a dedicated and focused acquisition strategy have aided Greatbatch in establishing a solid platform for growth through the manufacture of discrete components and a unique “system solutions” capability.

Such finesse in providing solutions that answer vital needs belongs to Greatbatch’s genealogy and traces back to the company’s founder, Wilson Greatbatch, inventor of the first self-powered implantable pacemaker, who started the company in Clarence, N.Y., just outside of Buffalo, more than 36 years ago.

Greatbatch Inc. was originally incorporated in 1970 as a privately held entity known as Wilson Greatbatch Ltd. Initially the production of lithium iodine cells, designed to power implantable pacemakers, was performed in space leased from the Wurlitzer Corporation (yes, of jukebox and organ fame) in North Tonawanda, N.Y. The first implantation of a pacemaker with a Greatbatch lithium iodine cell occurred in Italy in 1972.

In 1994, because ICDs also require high reliability capacitors to store energy for delivery to the heart, Greatbatch began the development of wet tantalum capacitor technology. This research program led to full-scale manufacturing, resulting in the first shipment of product in 1998.

In 1997, management led a leverage buyout of the company. In September of 2000, the company successfully completed its initial public offering and listed on the New York Stock Exchange, symbol GB.

In addition to supplying the medical field, Greatbatch also leverages its expertise to design and manufacture nonmedical power sources for oil and gas exploration, military, aerospace and oceanographic applications.

Energy for life
It is in the medical field in which Greatbatch has made its greatest strides, with products that have provided energy for life for the medical device industry. The company’s innovation and expertise enable its customers to advance their systems’ technology by making implantable devices smaller and longer lasting with enhanced functionality. Greatbatch enables its customers to optimize their operations in other ways as well; these include:

Continued emphasis on reliability: Greatbatch has a 36-year track record of reliability with extensive and lengthy testing of its power products. Introduction of new, more reliable technologies, such as the Q Series batteries, assure stability of energy output throughout the life of the device. Low polarization coatings and specialty coatings for lead systems allow for more efficient, effective therapy.

Neuromodulation: Among recent advances in medical devices, a new generation of implantable neurostimulators is being developed and introduced into a market that is expected to expand quickly. These new devices have new features that require higher-level current pulse power from their power sources. A new battery technology, QMR, has been designed by Greatbatch. Additionally, the company offers a line of rechargeable batteries that also addresses the needs of this market. “We are working closely with a number of leading neurostimulation companies. The demands of the implantable device markets are such that we must pay absolute attention to delivering the highest quality products that meet the needs of the customer every time,” Schechter notes.

Size: Both patients and clinicians continue to demand that implantable devices, and therefore the integrated batteries, be as small as possible. Energy density and specific energy are critical considerations. As medical technology has advanced, GB has led and continues to lead the way in the development of smaller and more powerful batteries, capacitors and precision engineered components for implantable medical devices.

MRI Compatibility: With an expanding need for devices to be “MRI- friendly,” Greatbatch has several development programs underway to address this issue on a component level.

These state-of-the-art facilities combined offer the technologies and capabilities that are so crucial in today’s world of implantable medical devices, in which now, as before, reliability is of life-saving consequence. Greatbatch has proven that its breakthroughs have not only saved lives but have made those lives better. As Schechter stresses: “We give absolute attention to delivering the highest quality products that meet the needs of the customer every time.”