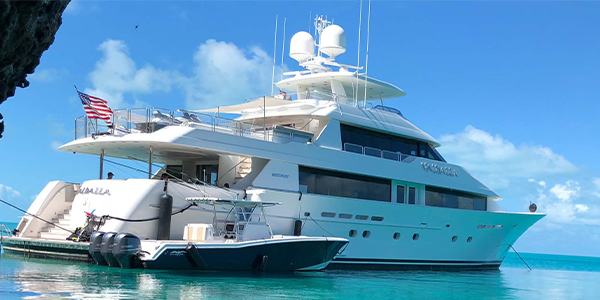 Working up from the bottom is a generally accepted principle of sound construction. Westport Yacht Sales and Shipyards, however, upends this seemingly common sense notion to keep its business afloat. In the wake of its enviable record in building yachts ranging in value from $7 to $29 million, Westport has charted new waters that few have been able to navigate.

“Historically, a boat builder begins with the lower deck and the hull, puts the engines in and then sets up scaffolding to work from the bottom up to as high as 40 feet in the air,” explains Daryl Wakefield, shipyards president. “In contrast, we begin construction with the top bridge. When that is completed, we raise it up and slide the next deck underneath. We repeat this process until we reach the bottom of the boat and slide the engines in last.”
There are several advantages to this method. One is that people are always working on the floor, not climbing up and down scaffolding. “There’s little chance of scratching or damaging what you’ve already built by having to constantly climb over it to get at the next level of construction. So there’s no time wasted spent going back to repair and retouch,” Wakefield explains. “It’s just an easier way to do it.”

It also means that the engines, one of the most expensive components of a yacht, are installed last, not right at the beginning. There are two big pluses to this arrangement. “Typically the owner is billed as stages of construction are completed,” Wakefield says. “So the way we make the boat shifts one of the biggest expenditures from the beginning of the process to the end, and if we’re building the boat for our own inventory, that’s equally advantageous to us to defer that kind of capital expense later rather than sooner. Also, because of the length of time it takes to build a yacht, with traditional construction the engine could already be a couple of years old by the time it’s actually put into service. The way we build the boat, the consumer gets the latest engine technology at the time of completion, not last year’s model.”

There is, though, one trade-off to Westport’s technique that may not be suited for a particular kind of yacht buyer. “We build to a standardized model. While the owner can request certain customizations, we don’t normally do custom builds,” Wakefield says, but quickly points out, “It’s important to distinguish that modular building to a stock model in no way implies a somehow less desirable product. That’s not the case at all. It’s merely serving the needs of a different kind of buyer. There’s the guy who wants a custom boat and wants to get involved in all the details and can wait two years or more before whatever vision of a yacht he’s got actually becomes something that gets in the water. Then there’s the other kind of buyer, the one we market to, who simply wants a yacht. And if he orders one of our models, he’ll have it built for him in 14 months. Or, if we have one in stock, he can have it in a couple of days.”

Built Better
“We offer turnkey products,” adds Phil Purcell, vice president of sales, “that in some respects are built better than custom yachts.” One is the use of composite construction materials, which have a foam core around which fiberglass is wrapped, as opposed to a total fiberglass laminate or even steel or aluminum.

“Composites are light and strong, with better sound and thermal insulation,” Wakefield explains. “The light weight makes our yachts faster (and in fact our yachts are the fastest in their class) and more fuel-efficient. A composite structure also more effectively isolates and absorbs sound, reducing hull and mechanical noise levels to quiet operation and more enjoyable cruising. And because the composite has high insulation, there’s a lighter electrical load required to air condition the vessel.”

He adds, “You get all these benefits and exceptional structural integrity combined with minimal maintenance since there’s no corrosion. It actually is more expensive to build a yacht with composite materials, but it is the only way we’ll build one. The benefits more than outweigh the extra expense.”

Westport has an in-house design and development staff and works with the most-widely regarded naval architects and engineers. “We put a huge investment in both time and money in working with top people in the industry to deliver superior performance, structural integrity, contemporary style, and efficient interior arrangement,” notes Purcell. “The best part is that the buyer doesn’t have to spend all of their time and energy in the process, but gets all the benefits. We recover our costs by doing multiple iterations of that design. In addition, before the first hull is built in any new model series, we invest heavily in every aspect of the build, from tooling and process flow to patterning for systems installation and major components to ensure first-time-through accuracy for superior fit, finish and detail. So our customers not only get the product faster, they get it better.”
Wakefield also notes that while the boat building process is highly labor intensive (approximately 70,000 labor hours at the low end), the process is more efficiently managed when following pre-established patterns. “There are no surprises the way there could be with a custom build. One indicator of that kind of quality is that when one of our boats gets in the water, the customer can almost immediately take off to wherever he wants to go. We flip it on the water on Wednesday and the customer leaves for Florida on Sunday. While there are bound to be some minor adjustments and a short punch list, everything fits as it’s supposed to and runs the way it is supposed to, and the vessel is completely sea worthy. In contrast, it’s not unusual for a custom built boat to take over two months of fine tuning before all the kinks are worked out.”

In addition, Westport will supply a crew for about a week, and a captain if requested, to put the yacht through its motions to train the owner’s crew. Purcell adds, “The owners have our contact numbers and we can take control of most issues remotely. There’s someone available 24/7 from Westport to address any concerns that may come up.”

The company started in 1964 as a builder of commercial fiberglass fishing boats and salmon trollers in the Pacific Northwest. However, conditions that led to a decline in building these particular type vessels led to a shift toward motor yachts, of which it has built 52 to date, and today is the largest North American motor yacht manufacturer.

Westport currently offers three models, defined by vessel length: 98, 112 and 130 feet, with a new 164-foot (50 meter) about to be launched next year out of the Port Angeles facility. Purcell notes that it is not unusual for repeat customers to migrate from one size vessel to another. “I was standing at a boat show recently when I overheard someone say, ‘Wow, Westport finally introduced a 98.’ And I was thrilled by that for a couple of reasons. One that he immediately recognized the name and was using it as if everyone should know who Westport is. So there’s a high level of comfort with the brand name. Moreover, he was looking for something in this class that we could now provide him.”

The new 50-meter, which Westport is touting as its most extensive engineering effort to date, holds a lot of promise towards meeting a market need for larger motor yachts. “We primarily sell to North America, just because we have our hands full satisfying customers here. However, we have sold to Europe and we think the 50 meter will attract more customers from that market,” Purcell says.

Westport sells both directly from its own inventory and through brokerage services. “We’re happy to work with brokers, both for new sales and to arrange the sale of vessels currently owned by our customers,” says Purcell.

World petroleum prices are currently highly volatile, and while that does affect the price of resin, a key ingredient of fiberglass, Wakefield notes that it hasn’t so far had much of an effect on its business. “We have a lot of materials already in stock, and while the situation right now is admittedly a bit scary, it isn’t an issue yet with us,” Wakefield says. “If it continues over the next two years, then it could be a problem.”

But doesn’t the high cost of fuel make a yacht all that more expensive to own? Wakefield laughs, “The least expensive part of owning a yacht is fuel costs. Many of our customers fly in on their own private jets just to visit out showrooms. Believe me, they’re not worried about the fuel bill.”