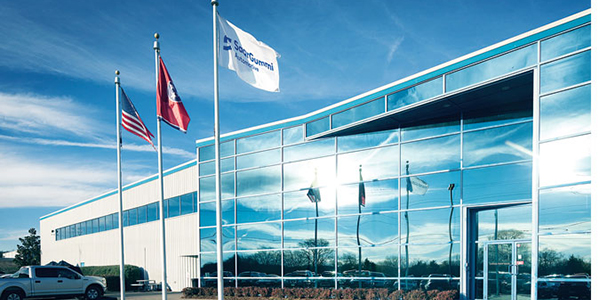 It was a marriage made not in heaven, but in Ann Arbor, Mich. The similarities between the two companies begged for some sort of engagement. Both were Tier I suppliers of automotive sealing systems. Both set their sales near the DM150 million mark (about $75 million) in 1999. Both were known for quality products priced right, and for their concern with customer satisfaction. Both wanted to establish a greater global presence. Fate thus brought them together (with a little help from top-level communication and negotiation), and it was love at first sight.After a successful joint venture in Pulaski, Tenn., where SaarGummi and Thona teamed up to supply world-class sealing systems to world-class customers in the general neighborhood – Mercedes-Benz, Nissan and Saturn – the companies agreed to make the relationship permanent. SaarGummi acquired Thona’s six manufacturing facilities in Quebec, Canada, the 90,000 square-foot Tennessee plant and Thona’s engineering and development center in Ann Arbor, which serves as the sales and development headquarters for this new operation.

The Architect
The deal was brokered by Markus Werner, a 30-something project manager who came from Roland Berger & Partners, an international consulting firm based in Munich. Werner began working for SaarGummi in 1998, coordinated the joint venture and the acquisition, and then was named president and chief operating officer of SaarGummi Americas. He is responsible for sales in North America, and for development and project management throughout North and South America. “Technologically and philosophically, our organizations complement one another beautifully,” Werner maintains. “It is a synergistic union that a number of customers enthusiastically encouraged.” The global reach of the enterprise now extends to four continents: Asia, Europe and both North and South America, with other manufacturing plants located in Germany, the Czech Republic, Spain, Brazil and India.

According to Dr. Michael Karrenbauer, SaarGummi’s chief executive officer, “Thona was the perfect fit for our global expansion plans. Their engineering and production technology is among the best we’ve seen in the world. This point is reinforced by the fact that Thona recently earned its fourth consecutive Supplier of the Year award from General Motors.”

SaarGummi recently announced the opening of a new manufacturing facility in Guadalajara, Mexico. The 35,000 square-foot plant will produce the removable, encapsulated glass panels of the much-anticipated Chevy Avalanche, which is being assembled by General Motors in nearby Silao. The facility has a 200,000 parts-per-year capacity. “We designed Guadalajara to respond quickly to increased production needs,” notes Werner. “When we began construction, initial projections were for 130,000 parts. We’re now looking at 200,000. If the customer needs it, we can easily double that capacity.”

The Name for Seals
The list of products the company produces is a long one that ranges from air-conditioning insulators to encapsulated window assemblies, all having to do with proper automotive sealing. Windshields, sunroofs, door seals and trunks – they all need to be able to keep the rain and wind out. SaarGummi products make it happen.

In addition to the famous Tennessee customers, SaarGummi is the seal supplier of choice for a few other automobile manufacturers whose names are more than familiar: Porsche-Volkswagen-Audi, BMW, Ford and Daimler-Chrysler.

Although the focal point of the SaarGummi organization is the automotive industry, the enterprise produces a broad array of Tier I supplies. For shoe manufacturers, it delivers soling sheets for men’s and ladies’ shoes and expanded rubber as an alternative to leather soles and rubber compounds for safety shoes, army boots and shoe repair. For roofers, it provides thermofast-jointing technology – a system that requires no solvents, solvent-bonding agents or solvent-containing adhesives. For mechanical engineers, the company makes membranes and bases for hydraulics, oxygen masks and dust shields for safety engineering, bellows for the medical sector and seatings for engines and gearboxes. The pipe industry benefits from SaarGummi’s know-how in its delivery of gasket rings for drain channels, drinking water pipelines and gas pipes. Perhaps the most interesting and best-known applications are the resilient rubber components for rail-track systems: SaarGummi’s products are used on the Eurotunnel, where they help to reduce noise and maintenance costs. The fewer the vibrations, the lower the amount of rail malfunctions and wear and tear.

Although Ann Arbor serves as SaarGummi Americas’ sales and development headquarters, its Canadian presence holds great significance. Canada is a country that is geared for export. Its government offers significant tax advantages to manufacturers. Low inflation, the availability of skilled employees whose wages are controlled by law and whose health care is covered by the National Health Care System, and a favorable exchange rate add up to a committed work place, excellent productivity and substantial cost savings.

With its Canadian connection, the support from its German parent and its strong management team, SaarGummi Americas’ future seems sealed.