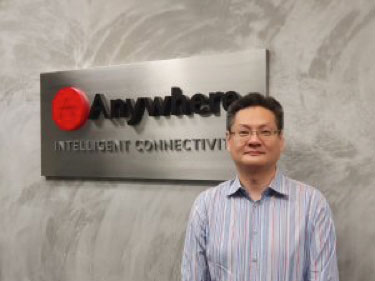 “Our business is international but the location for our headquarters is strategic,” Anywhere Networks CEO Winfred Fan said when explaining why the technology company decided to establish its base in Hong Kong. “The thought process was focused on which city would provide us with the best advantages for our business,” Mr. Fan said. Established in 2016, Anywhere Networks (formerly P2 Wireless Technologies) designs and manufactures scalable, high bandwidth network solutions, mainly for use with smart city and safe city surveillance camera operations.

“We looked at a number of other cities before we finally decided to set up our headquarters in Hong Kong,” Mr. Fan said. Shortlist options included Australia, Hong Kong, Silicon Valley and Singapore, but it soon became clear the collective advantages Hong Kong could offer made it the best-fit option for the company. In addition to offering one of the world’s lowest rates of business and salaries tax, Hong Kong has no sales tax, withholding, capital gains or dividend-based taxes. “The Hong Kong tax system alone is a big attraction,” Mr. Fan noted.

With about 1,000 daily flights between Hong Kong and the rest of the world, the city is less than a four-hour flight to major Asian destinations. At the same time, Hong Kong’s proximity to one of the main manufacturing bases in Mainland China, less than an hour across the boundary from Hong Kong, offers flexibility and efficiency in prototyping. “I can travel to the mainland easily and manage the prototyping and production whenever I need to,” Mr. Fan noted.

In addition to its many commercial advantages, Mr. Fan said establishing the company headquarters in Hong Kong also offers intangible benefits. Citing the real-estate mantra, “location, location, location”, he said having its headquarters in the Hong Kong Science Park – where there is a strong focus on work and innovation – means the company is part of a dynamic ecosystem. “There is an element of prestige about being located here,” Mr. Fan said. Just as important is Hong Kong’s respected position in the international marketplace. Mr. Fan pointed out that products and services from Hong Kong have a high international “trust” attachment.

For Anywhere’s overseas non-Chinese employees, Hong Kong is a bilingual city, where most information – including signs, announcements and government and business websites – is provided in English as well as Chinese. A further benefit is the rapid processing of immigration and work visas for overseas professionals joining the company in Hong Kong. Mr. Fan also gives Hong Kong high marks for overall economic freedom, transport infrastructure and language skills. As a provider of critical wireless broadband infrastructure, Hong Kong is open to interaction with international markets, which reduces some of the possible business relationship complexities of being headquartered in the United States or the mainland.

As the cost of installing surveillance camera units has fallen significantly in recent years, the demand to capture video feeds from their point of origin and connect them to control rooms where they can be monitored or analyzed has increased exponentially. In turn, this rise boosts demand for high-performance connectivity devices. To meet expanding demand for its products and services, Mr. Fan said access to a talent pool of computer engineers and software professionals is paramount.

In addition to recruiting graduates from Hong Kong’s internationally renowned universities, the company has successfully brought in employees, which the company refers to as colleagues, from careers events organized by the Hong Kong Science Park. Currently, Anywhere Networks has a headcount of about 30 colleagues, including five engineers based in its US research and development office. Looking ahead over the next couple of years, Mr. Fan expects the company’s team to double to about 60 people.

With innovation and technology companies fast becoming key drivers of the global economy, Mr. Fan said the company is considering an initial public offering (IPO). In the same way as locating the Anywhere headquarters is an important element of business strategy, Mr. Fan said choosing where to launch an IPO also requires careful consideration. However, he noted that Hong Kong’s long-standing reputation as one of the world’s leading destinations for capital-raising among major financial markets is another strategic advantage the city offers.

To learn more about the latest trends, challenges and opportunities of doing business in Asia, and where to get started, be sure to register for the upcoming Think Asia, Think Hong Kong symposium in downtown Los Angeles on Friday, September 20. Learn more at www.thinkasiathinkhk.com/2019