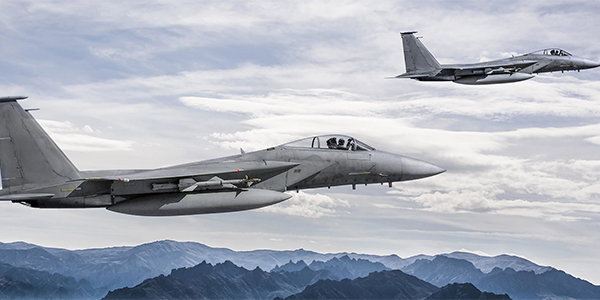 Economic indicators showed good news for the aerospace industry in the first half of 2005, with both orders and employment statistics showing increases. Aerospace employment continued a positive trend that started last year, adding 11,100 jobs since the end of 2004. Statistics compiled by AIA’s Aerospace Research Center in June after the first two quarters of this year showed total aerospace employment of 618,400. This compares to 607,300 in December 2004. The trend is not unexpected after last year’s job rebound, and it underscores the industry’s important place in the national economy.

Aerospace employment had been falling steadily since the early 1990s as a result of the end of the Cold War and other factors. It hit a 50-year low of 579,700 in February of 2004, but then immediately started a sustained rebound that added 27,400 jobs by the end of the year.

The employment statistics, which come from the Bureau of Labor Statistics, include workers in aircraft, missiles, space vehicles, propulsion, and parts as well as search, detection and navigation instruments. The aerospace and defense industry is the leading net exporter of manufactured goods, with a positive foreign trade balance of $31 billion last year. Other key economic indicators show the sector is on pace to have its best year in terms of orders, shipments, and backlog in more than a decade. Statistics show aircraft and parts new orders and shipments significantly increased in the first half of 2005. The numbers also include search and navigation instruments and include both the civil and defense sides of the industry. These figures show:

Skilled workers wanted
It’s encouraging to see that last year’s employment increases marked the beginning of what is hopefully a long-term trend. This once again proves how we are an important economic engine for the United States.

Employment statistics are especially important because of an impending workforce crisis in the aerospace and defense industry. Maintaining a highly skilled U.S. aerospace and national security workforce is essential to America’s security, knowledge base, and economic well-being.

The United States lacks an integrated national plan to develop the next generation aerospace workforce that will replace the skills, experience, and intellectual capital lost by the aging of the current workforce.

The President’s Commission on the Future of the U.S. Aerospace Industry highlighted the potentially devastating impact of a workforce shortage. In it’s final report to Congress, the commission clearly stated that, “(job) losses, coupled with pending retirements, represent a devastating loss of skill, experience, and intellectual capital to the industry.”

In 2008, it is estimated that nearly 30 percent of the aerospace workforce will be eligible for retirement. Currently, the U.S. educational system is not providing enough students with the needed math and science skills to fill the critical positions being vacated by retiring workers. In addition, fewer students are pursuing undergraduate or graduate degrees in science and engineering disciplines.

When these students graduate, the aerospace industry is in competition with other industries such as IT to hire them. Finally, the cyclical nature of the aero-space and defense business often causes graduates to pursue careers in other industries. In examining the future of the national aerospace workforce, it is clear that there is a need for a coordinated and broad-based national plan to promote career opportunities within the industry.

The following critical areas must be addressed:
• identifying and understanding the unique aerospace and national security workforce needs;
• developing and maintaining a strong partnership between the companies, academic programs (community, technical, four-year, graduate, and post-graduate colleges), local communities, and the public workforce investment system;
• continuously developing and improving skills training curricula in response to in-demand occupations within aerospace;
• improving the quality and capacity of education, training those who provide skills, and expanding programs to
meet demand;
• promoting a positive image of the aerospace and national security industry to retain and recruit new workers;
• developing and maintaining a work-
force pipeline through recruitment and retention activities that connect people, training, and occupations to meet demand.

This comprehensive national plan for promoting and ultimately filling in-demand, high-tech aerospace jobs must be developed, demonstrated, and implemented.

To address the problem, AIA strongly supports a bill introduced by Rep. Vernon Ehlers of Michigan, which would create the Interagency Aerospace Revitalization Task Force.

Bill language notes that the aerospace industry generates a significant percentage of the country’s gross domestic product, leads the economy in gross exports and executes the nation’s military modernization programs. “To ensure the security of high-skilled jobs and the global competitiveness of the domestic aerospace industry,’’ one of the key findings of the bill said, “the United States requires coordinated federal government policies to sustain and expand the science, mathematics, engineering, and manufacturing workforce.’ The task force would consist of nine members, including representatives from the Commerce, Defense, Education, Transportation and Energy departments. Also included are NASA, the National Science Foundation, the assistant labor secretary for Employment and Training and a member to be named by President Bush.

It would be charged with crafting a national strategy for aerospace work-force development to include education, training policies and other industry-led partnerships.

The good news on recent employment trends should not overshadow our need as a nation and industry. We simply cannot ignore the looming crisis in our work-force. It is imperative that Congress recognize the threat and move decisively to support private-sector efforts to train future generations of aerospace workers.