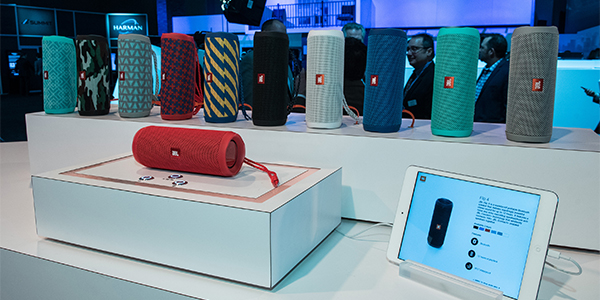 If you have ever wondered how rock singers reach some of those high notes, the answer is that many of them get a little technical help from a Salt Lake City company called Harman Musical Group (HMG). One of HMG’s many products is a gadget that converts what vocalists sing into a higher octave. This particular piece of technical magic is called “pitch shifting.” A different product can “shape and refine” the sound of an electric guitar.
“Where we live is between the instrument or the microphone and the amplifiers and speakers,” said Matt Bush, vice president of operations at HMG. “This is electronics to shape the sound and refine the sound. Everything between the musician and the speakers is where we live.”

It is HMG’s rate of innovation that persuades so many professional and amateur musicians to buy its equipment. “Innovation is our core competence,” said Bush. “We can support such innovation through our superior capability. “Our rate of innovation is what we are most proud of and what our customers are most concerned about. It is higher than anyone else in the industry. We do outsource some manufacturing to Asia but our in-house capability is world-class. “We are the only United States company in our specific market segment that has its manufacturing facility stateside. A combination of that in-house capability as well as our research and development makes it really hard for our competition to play in the same game, at least for very long.”

Brand leaders
Such innovation benefits consumers at both ends of the price spectrum, as products from the HMG lineup range in price from $3,000 at the high end to $29 at the low end. HMG produces three brands that hold enviable positions in their markets – dbx, DOD and DigiTech. John Johnson and David Difrancesco founded HMG, formerly known as DOD Electronics, in 1974. Inspired by an ambition to create superior guitar effects at an affordable price, they set about establishing a standard for performance and reliability right across the industry. Harman International, the largest audio manufacturer in the United States, acquired DOD Electronics in 1990 and changed the name to Harman Music Group.

Located in Sandy, Utah, HMG designs, manufactures and markets what is technically called “signal processing equipment for professional musicians, recording studios, and live sound applications.” Parent firm Harman International makes high-end audio products for homes, cars, concert halls and recording studios under brands like Infinity, JBL and Harman Kardon. Harman International’s corporate office is in Washington D.C., and it has significant production plants in Southern California, Indiana, Great Britain, Germany and Austria. HMG proudly boasts that every time you listen to the radio, turn on a CD or catch a jingle on TV, the chances are high that the sound you hear was influenced by HMG equipment.

“For a lot of our gear like that of DigiTech, the main customer is the guitar player,” said Bush. “But we also serve vocalists when they want to change octave. It is called pitch-shifting. The gear takes what a vocalist sings and shifts it up an octave if the singer is having a hard time reaching a pitch. Our stuff does that for them. “Our gear is used by a range of musicians from the biggest stars around to people just aspiring to that level. dbx and DigiTech hold number one brand positions in their markets. The products we put out are amazingly innovative.”

Good feedback
dbx leads the field as a “dynamics processing” company. It has combined its “detection and summing methods” to be “true” to the sounds that are heard by the human ear. dbx has patented integrated circuit designs that can detect and then process natural sounds over a broad range of signals.

DOD’s products range from multi-effect processors and pedals to filters and compressors. Guitarists rave about DOD’s products because of the variety of sounds they can achieve. On-going feedback of the right kind from customers and a continuing commitment to research and development helps DOD stay ahead. DigiTech is the largest manufacturer of guitar equipment in the world. It simply has unmatched innovations in guitar products, ranging from pedals and pre-amps to modulators. It is a recognized leader in modernizing products for vocal harmonies and studio processors, such as its “vocalist workstation” and new DigiTech “studio” line.

The innovation in the Harman group of companies pays dividends. Harman International announced record results for the second quarter and the first six months ended Dec. 31, 2002. Net sales for the quarter were $560.0 million, a 20 percent increase over net sales of $467.4 million in the same prior year period. Exclusive of currency effects, net sales increased 13 percent. Net income for the quarter was $27.6 million compared to $11.7 million in the previous year’s second quarter. Earnings per diluted share were $0.81 for the quarter versus $0.35 the year before.

For the six months ended December 31, 2002, net sales were $1.051 billion compared to net sales of $866.4 million in the prior year first half, an increase of 21 percent. Excluding currency effects, net sales were 15 percent higher. Net income was $37.4 million for the period versus $16.8 million in the same period the previous year. The company reported earnings per diluted share of $1.10 for the six-month period, more than double the earnings of $0.50 per share in the prior year period.

Harman International declared a cash dividend of 2.5 cents per share for the second quarter ended December 31, 2002. Bush believes the entertainment industry, which relies on HMG’s products, is holding up well. “As far as the economic climate is concerned, the industry has been fairly stable and perhaps even growing a little. It has not been hit as hard as telecoms.”

Looking forward, Bush predicts more integration and connectivity between music technology and computers. HMG’s innovation should keep it plugged in to whatever developments emerge.