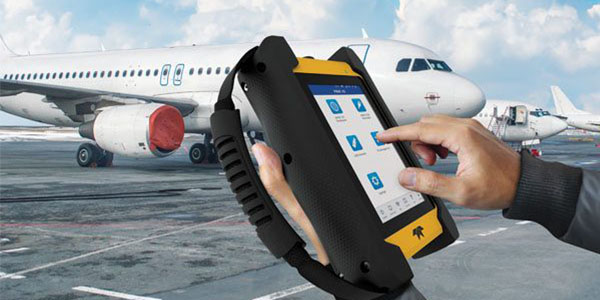 Corporate aircraft travelers throughout the world can breeze through details of their business, even while they are airborne and traveling at 40,000 feet. These travelers have the Los Angeles, Calif., Teledyne Controls to thank for this superior connectivity to their businesses. “Our SmartCabin Office™ provides fully networked global voice and high-speed data communications that enable business executives to browse the Internet, videoconference, access an office or personal private network, send and receive faxes and e-mails, and make and receive voice calls while flying,” says Matthew Wing, marketing director for Cabin Products.

Smart Integrations
One of the reasons the office-in-the-sky concept never really materialized is because no one company ever possessed all the necessary technological capabilities to produce the products that could deliver this service. But this did not stop Teledyne Controls. Over the past year, the company surveyed the technological landscape and chose the crème-de-la-crème the world has to offer. “We are the first company to successfully package together all of these technologies through contractual relationships to form a strategic alliance we call the SmartCabin Office Partners,” Wing continues. These include products and services from EMS Technologies, Inmarsat, Miltope, Raytheon, Verizon, and key distributor DAC International.

“If there are superior products in the industry we believe can complement what we are trying to bring to our customers, we will try to partner with those market leaders in order to integrate their products with ours,” adds Scott Chambers, manager of marketing and sales support. “We don’t have the “not invented here” mentality that excludes products made by other manufacturers.”

Teledyne designs and develops these vanguard communications products, and then integrates the other necessary products manufactured by the alliance members to create complete solutions. “Integrating the components and getting them to work together as a single system is a major effort that we’ve accomplished here, and is a key factor in meeting the customers expectations,” Wing says. “Historically, we have offered a combination of products that we manufacture and then a line of complementary products manufactured by other companies whose core business is not necessarily in the industry of commercial or corporate aviation,” adds Jody Glasser, senior director of advanced technology. The example, he notes, is MagnaStar®, developed and manufactured by Raytheon and distributed exclusively by Teledyne.

Recognizing the increasing higher-speed demands of corporate travelers as Internet technology advanced, in 2001 Teledyne surveyed the landscape to evaluate technologies and products that could best satisfy that need. The timing was ideal, as Inmarsat was just bringing to market its Swift64 service that delivers 64K bps per channel through a its global satellite communications network. For airborne equipment, one company stood out as the clear technology leader, the Satellite Communications Division of EMS Technologies of Ottawa. EMS was in the final development phase of its HSD-128 system that provides two channels of Swift64, that can be bonded to provide up to 128K bps connectivity to the cabin passenger, as well as global voice services. Both companies quickly recognized the advantages of a partnership. EMS gained access to the MagnaStar customer base and Teledyne satisfied the customer thirst for data and lower cost global voice services. Both rapidly signed an exclusive marketing agreement for Teledyne to bring the innovative product to the corporate aircraft market.

Connected to the World
“The HSD-128 provides global voice and data connectivity over the Inmarsat Swift64 service,” explains Wing. “It is the industry’s only dual channel Swift64 system available and boasts uncompressed data rates up to 128K bits per second, which is twice that offered by competitive single-channel systems.” The HSD-128 serves as a global extension for the MagnaStar voice system, offering both ISDN broadcast quality voice capabilities at 64K and lower-cost Mini-M Aero compressed voice at 4.8K.

“Part of the total solution is really to provide access to the system in a way that is familiar and simple to the user so he or she does not have to be an IT person to figure out how to use it,” Wing says. “The product systems we bring to market allow corporate travelers to be as productive as possible with their travel time.” He notes that a key component to the system is its wired or wireless-based LAN, offering the same interface capabilities one would expect in one’s office. “The onboard LAN can act as yet another node on the company’s greater data network solution,” adds Glasser. “The idea here is that an executive can use his laptop onboard and his computer works at the same speeds as if he were in his office – and there’s no difference in the way he logs into the network,” adds Glasser.

GroundLink® is an optional wireless communications link also available within the SmartCabin Office suite. It is a high-bandwidth terrestrial data connectivity product using commercial cellular technology and interfaces to the cabin LAN, providing corporate travelers with high-speed data connectivity over an IP connection. GroundLink operates while the aircraft is on the ground and was designed for busy executives who use their aircraft as an occasional remote office while sitting at the airport.

“GroundLink can move aircraft data on and off the aircraft,” explains Wing. “Beyond the IP connection for the passenger, the GroundLink can refresh large amounts of server data or support aircraft maintenance requirements. The data might be flight operations information stored in a flight recorder for maintenance analysis or it might be software programs you want moved from the airplanes ground base to the aircraft while it’s sitting at an airport half-way around the world. It just makes loading the data aboard the aircraft much easier and more manageable.”

Teledyne data acquisition systems are installed on over 70 percent of large and regional airline aircraft worldwide. Performing the most complex tasks of the aircraft’s overall flight recording system, the Digital Flight Data Acquisition Unit (DFDAU) monitors all of the key aircraft operational parameters, performs all necessary data conversions, and feeds that information to the Flight Data Recorder (FDR), or black box. In addition to the FDR function, the DFDAU performs constant real-time analysis to monitor the parameters coming through the system; any operational anomalies happening onboard the aircraft are immediately flagged. “These kinds of analysis systems, once considered a luxury but are now an essential component, are essentially comprised of airborne computers and have been performing these functions since the birth of the jumbo jet in the late ‘60s,” Wing says.

Customized Designs
Teledyne’s client list bears testimony to the company’s superior quality and vanguard innovations. “We sell to just about every airline on earth,” says Glasser. “This includes all aircraft manufacturers such as Boeing, Airbus, Bombardier, Gulf Stream, Dassault, Raytheon and Embraer. Working closely with our customers is an important aspect of our business. We don’t believe in one size fits all and we are willing to understand the needs of our customers so we can quickly adapt our products to their specific needs.”

In response to the industry’s push for data links, Teledyne developed a data/ communications system called the Communications Management Unit – within a category of products referred to as Air/Ground Data Link. And American Airlines took notice and chose Teledyne’s CMU product to be fitted on a large portion of its fleet of MD80 aircraft. “This product manages the air to ground data messaging communications and provides the ability to route messages to and from the aircraft to whatever ground base is desired – such as an airlines operation center, an air traffic control center, or an aircraft maintenance center,” explains Wing. Further, Delta Airlines selected the Teledyne data link avionics package, including the CMU and VHF data radio package (manufactured by Thales), to provide the air/ground communications capability to participate in the FAA’s Controller Pilot Data Link Communications (CPDLC) trials. Taking place in the Miami Air Traffic Control center, the CPDLC trial key to the Aviation Industry’s Air Traffic Management (ATM) plans for easing traffic congestion, allowing traffic growth, and enhancing safety. CPDLC is designed to reduce the volume of routine voice communications between pilots and controllers, thereby increasing the capacity of the air traffic control system.

Despite the numerous challenges to the industry – such as the events of Sept. 11 as well as the general U.S. and world economic conditions – Teledyne continues to remain strong. “In spite of all of this, we continue to become increasingly profitable,” says Chambers. The controls division boasts $100 million in sales and employs 300 people in its 158,200-square-foot facility. The company’s annual Users Conference held every March at its headquarters in Los Angeles has, over the 12 years it has been operating, grown into an industry event drawing airline and corporate aircraft operators from around the world.

Innovation will continue to be Teledyne’s driving force. As a division of Teledyne Technologies, Teledyne Controls plans to keep its leadership role in the corporate aviations communications industry. “We will do this by continuing to bring together the global technology leaders’ products and innovations into systems we integrate here,” Wing says. “We are the company bringing these integrated systems to market and we are the ones providing a single point of support to each of our customers.”