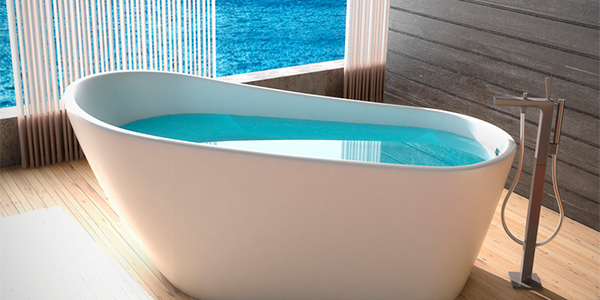 Most parents are familiar with the popular children’s book, “Where the Wild Things Are” by Maurice Sendak, and its famous final line: “And it was still hot.” That famous last line, which has inspired the imagination of children everywhere, could also be used as the motto for Jetta Corporation, which has become an industry leader in the field of luxury whirlpool bathtubs by keeping hot water hot for longer periods of time than any of its rivals.

In fact, the Oklahoma-based company offers its customers a unique guarantee – that after 30 minutes of use, the water temperature in one of its tubs won’t drop more than two degrees. The company is able to achieve this standard by using a special type of insulating foam that works on the same general principle of a Styrofoam coffee cup – the insulation keeps the water hot.

“That’s one of the main things that we want to emphasize, that the water does stay hot for the duration of the bath,” said Jerry Conner, the president of Jetta, which is located in Edmond, Okla. “That means that you don’t have the added expense of in-line heaters.”

Indeed, one could say that the success of the foam insulation developed and marketed by Jetta has something of a “ripple effect.” Not only does the lack of in-line heaters reduce costs and potential maintenance issues, but the thick layer of insulation also reduces excess noise and vibration, which helps Jetta make its tubs a more relaxing experience.

Branching out
That unique and innovative approach has allowed Jetta, which is celebrating its 25th anniversary, to grow both its geographical reach, which now covers a large swath of the Southwest, Central and Western regions of the country, as well as its customer base.

A cornerstone of that growth has been an expanding network of showrooms billed as “Jetta Design Centers,” across the regions where Jetta’s business is concentrated. These Design Centers use lighting, design and ambiance to showcase all the advantages of a Jetta whirlpool tub to the potential buyer. Company officials say that these inviting showrooms help set Jetta apart from the “big box” stores where atmosphere is usually not a factor.

“It’s very welcoming to the consumer,” said Cynthia Nichols, the marketing coordinator for Jetta. “Some customers have walked in and said, ‘Wow.’ They would be completely blown away by what they saw. The message and ambiance of the Design Centers is one of calm and warmth, because the idea is to, ‘Escape into the warmth’,” which is a marketing slogan for the company.

Nichols also said that having its own network of showrooms allows Jetta to show off some of the best features of its tubs. Every morning they will fill a tub with hot water, so that customers can see for themselves how the water stays hot for the rest of the day. The showrooms also feature a display showing cut-away models of a Jetta tub and two competing brands, so customers can understand how each tub is made.

“We want customers to see the difference for themselves. So one of the nice things about our Design Centers is that not only do you get to see the tub, but you can actually get in the tub to see which one fits best. Someone who is six foot two inches will not fit in a tub designed for someone five foot four inches, and the consumer appreciates the opportunity to try the tubs on for size,” Nichols said. “If your bathtub isn’t comfortable, then you won’t enjoy it the way that you should.”

25-year evolution
In 2001, Jetta was purchased by a small group of local investors that has kept the company private even as it has expanded into new markets. Today, Jetta employs approximately 130 people, the vast majority of which work at the Edmond headquarters, where the manufacturing plant is located. Jetta’s business model has evolved a great deal since it was founded in 1981. In those early years, the small, family-owned company was focused on manufacturing outdoor spas. But as the market changed and whirlpool tubs became a staple of the modern luxury home, the focus of Jetta shifted as well.

In recent years, the company’s network of showrooms has expanded to include design centers in Dallas, Houston, Denver, Kansas City, Wichita and Tulsa, as well as at the company’s headquarters in Edmond. And Nichols said that the company has branched out even further with distributors in Columbus, Ohio, Indianapolis, Indiana and in the Phoenix and Tucson, Ariz. area.

Jetta, which gets its name from the built-in water jets, places a great deal of emphasis on design and engineering. “We are always looking at modifications to our current or new designs,” Conner said, “to see which designs will lead to greater success and more satisfied customers and to find the viable trends in the market.”

During the past five years, one of these trends has been homeowners cutting back on travel and increasing spending on items that bring comfort in the home. Record low interest rates have meant a boom in construction of the newer luxury homes, while those who stayed in their current homes have been taking advantage of the low rates and rapidly rising equity to make improvements.

A new front
Not only does Jetta provide a premiere whirlpool experience, but it also has branched out into a broader array of bathroom products with a line called The Camden Collection. This collection features solid surface materials that have been created to give the lustrous look of natural granite and stone but with the many advantages and unlimited design possibilities of solid surfacing. The line is available for kitchen countertops, bathroom vanities, shower walls, and numerous other installations – including standard and custom solid surface shower bases and sinks. Since solid surface is a non-porous, seamless material, it resists mold, mildew and bacteria growth, is easy to clean and maintain and has a 10-year factory warranty.

“Solid Surface is great for new construction and also for remodeling – it eliminates tile and concerns with tile and the possibility of leaks,” Conner said. “This material is non-porous and will not have the maintenance issues that you do with ceramic tile.” For a company that is celebrating its 25th year in business, Jetta is just like its tubs: still hot.