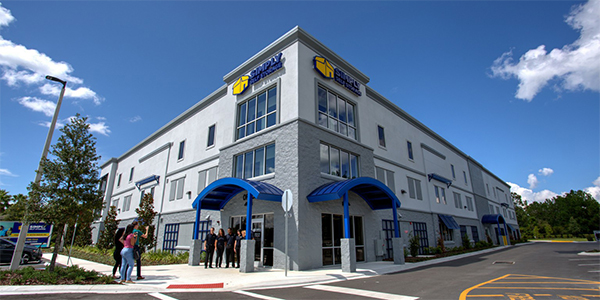 Thanks to a dynamic acquis-ition strategy, OB Companies/Simply Self Storage LLC has essentially made obsolete its oft-used self-description. For several years, the Orlando, Fla.-based organization has defined itself as the nation’s fastest growing privately owned self-storage company. Now, that well-documented boast has been exceeded by a more impressive claim: With the most recent of its many acquisitions, the company is now the largest, non-public self-storage operator in the United States and Puerto Rico.

A diversified corporation, OB Companies/Simply Self Storage operates in self-storage businesses, commercial real estate development and office construction, and Simply Self Storage itself provides storage services and offers moving supplies, truck rental and convenient online renting. It currently has more than 150 facilities with dozens of others in the planning and construction stages and expected to open in the next two years.

“The goal of our aggressive expansion is to purchase quality assets with management or marketing upside in locations that fit within our network and expansion plan,” explains Chief Executive Officer Kurt O’Brien. “Specific companies that we look at include those that are poorly managed or where management has become complacent.”

Big Business and The Holding Company
Simply Self Storage has developed itself into a big business in a rather short time. However, it is not a new business. Rather, it is a resurrected one. It used to be called The Holding Company. Back in the 1990s, The Holding Company was ranked number 18 in the country before it sold off its portfolio. The company was brought back into the game in 2003, as OB Companies felt the country needed a different kind of storage experience. “If you’re going to grow a business and invest your own capital as well as other peoples’ capital, it makes sense to continue with what you know best,” says O’Brien.

O’Brien formed OB Companies in 2002, bringing together the experience and expertise he garnered from the successful companies he led since the mid-1980s. He built The Holding Company from the ground up and eventually purchased 43 storage properties comprised of more than 2 million square feet of rentable space in Indiana, Kentucky, Ohio, Tennessee and Arizona. After operating The Holding Company for four years, O’Brien sold the business to a national self-storage chain. He served as its consultant for two years before he founded OB Companies.

Today, in addition to its core businesses, the company has diversified into profitable side ventures, which include auto retail, children’s day care and consumer products. In such ventures, it often partners with some of America’s largest companies. Still, the company maintains its entrepreneurial spirit, which encourages it to take risks and explore new and exciting markets.

2006 – A Very Good Year
OB Companies/Simply Self Storage made its most recent acquisition in November of 2006, when it purchased the asset portfolio of EZ Storage. In the process, the company transformed itself into the largest non-public self-storage operator in the United States and Puerto Rico. The EZ storage portfolio included 48 properties in six states (Massachusetts, Michigan, Minnesota, Ohio, Texas, and Rhode Island) and consisted of 3.7 million square feet of rentable space and 30,800 units. Also in that month, the company acquired a new facility in Michigan. Located in St. Clair Shores, the site consists of nearly 26,000 rentable square feet and 316 units.

In all, 2006 proved to be a busy year for OB Companies/Simply Self Storage, as far as acquisitions. In October, it acquired a six-property portfolio from the Illinois-based LifeStorage, a substantial package that included 441,221 square feet of rentable space and 3,854 units located in Algonquin, Carpentersville, Chicago, Elgin, Matteson, and South Chicago Heights. In that same month, OB Companies/Simply Self Storage purchased the three-property portfolio of The Lock Up Storage Centers, also in Illinois. The portfolio consisted of 166,875 rentable square feet and 1,541 units in Wheeling, Bolingbrook, and Palatine.

Continuing in reverse chronology, early in 2006, OB Companies/Simply Self Storage acquired a self-storage portfolio from Attic Storage that included six properties located in Kansas and Missouri. The portfolio consisted of over 166,000 rentable square feet and 2,889 units in Kansas City, Olathe, Belton, and Platte City. In August that same year, it acquired a self-storage portfolio from All Seasons Storage Trust – a considerable purchase that significantly expanded the company’s geographical reach. The portfolio consisted of 29 properties located in six states including Indiana, Kentucky, Pennsylvania, New Jersey, Ohio, and Maryland. Further, it provided more than 1.5 million square feet of rentable space and 12,783 units.

Also in August, OB Companies/Simply Self Storage expanded into Puerto Rico, purchasing a self-storage portfolio of four properties. This added 333,183 rentable square feet and 3,576 units to the companies total. At the time of the purchase, O’Brien commented, “We have been successful in the United States with the development and acquisition of multiple self-storage properties, and this purchase is a natural progression within our business model.”

Focused on Convenience and Service
But it takes more than just physical size to make a company successful. While OB Companies/Simply Self Storage is the largest privately owned company in its market, it also strives to be the best – and it seeks to achieve that through receptiveness to customer needs and enthusiasm about its business. “Basically, the two things that differentiate us from our competitors is our responsiveness and our young and highly motivated management team,” says O’Brien.

As O’Brien suggests, good service translates into relationship-oriented service – and that, in turn, means service that is personal, accessible, and aware. To that end, staff training involves not only self-storage technology; it’s about customer service and sales, too.

Further, Simply Self Storage strives to make storage as hassle-free as possible. As its name implies, it offers storage made simple. The company can provide the trucks and all of the packing materials a customer may need to help them move, and customers are offered a range of pricing and contract options (for instance, they don’t have to commit to a long-term contract if they don’t want to). They can rent online, too. Also, customer service representatives are available 24 hours a day.

Moreover, OB Companies/Simply Self Storage assumes a much more considerate stance than is typically demonstrated in the storage market. It’s well aware that many of its customers use its facilities and technology to store valuable items that carry a great deal of personal, priceless significance – in other words, irreplaceable items that represent a lifetime of memories and/or hard work. As such, the company treats all stored items with the special care that they deserve.

Looking ahead to 2007, the largest privately owned self-storage company intends to grow even larger. OB Companies/Simply Self Storage plans to make even more acquisitions, particularly in the Northeast, as well as in cities where it already has properties. In this way, the company is investing in security: In the larger picture, that means the security that comes with success; for customers throughout the country, it means the sense of security provided optimal storage service and facilities.