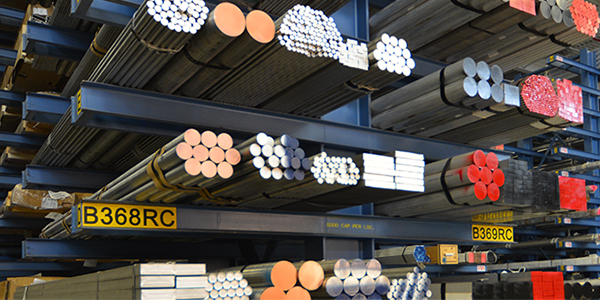 Craig Yarde spent nearly a year and a half in his basement. He began Yarde Metals there, after selling his motorcycle to raise the capital he needed to start this $100 million, Bristol, Conn. company. He began as a “small broker,” supplying bulk metal product (mostly stainless steel) to local OEMs who were looking for the sale of the century.

In 1976, there was a substantial influx of Japanese metals. The market was volatile and Yarde saw an opportunity to venture out into the challenging world of the entrepreneur.

The hard work paid off. With an understanding spouse and by plowing every dollar of revenue back into the business, Yarde moved the company to a small rented building in Bristol. Not long after, growth spurred another move. This time the company built a 45,000-square-foot plant in the newly established Technology Industrial Park also in Bristol. This move was the result of a New England economic down-turn caused by cut backs in government spending. Running contrary to the New England trend, the main plant and administrative office were expanded to 75,000 square feet — rapidly followed by the rental of another 200,000 square feet in Southington, Conn. A new 320,000-square-foot Bristol facility is in the works and will open sometime in 2001. There are currently four other Yarde Metals branches outside of Connecticut: The Massachusetts, New Jersey, New York, and Pennsylvania locations are satellite shipping and processing plants that have made Yarde Metals one of the most rapidly growing companies on the East Coast.

A supporter of open book management, a business style which levels the organizational chart, Craig Yarde has taken down the walls. The company has no individual offices, no closed doors and no titles, but everyone has defined areas of responsibility. By soliciting the opinions of everyone in the company and by sharing what is normally executive information only, associates now take part in the decision making process and make a difference in the direction of their company.

In order to maintain communication between the facilities, all the operational groups conduct weekly huddles. These meetings give the sales, drivers, marketing and production units an opportunity to discuss the particulars of their operations. Reports, suggestions, brain stormed ideas and any complaints are forwarded to the management group.

All of the information gathered from the weekly meetings is then prepared for the “Grand Huddle,” a monthly hunkering down of the Yarde Metals administrative group. Members meet to discuss the financial results of the previous month, offer suggestions to the rest of the company and share their success stories.

Perhaps the most important reason for the growth and success of Yarde Metals is the company’s commitment to innovative service. The inventory that is carried at all branches, but especially in Bristol, includes a wide variety of unique and hard to find items in stock that may not move as quickly out the door. Occasionally a customer might need 15- or 18-inch stainless steel or aluminum disks for sprocket manufacture. The usual procedure would be to cut the disks from flat plate. Yarde Metals stocks 15- or 18-inch large diameter “Yarde Bar” so that the disks can be sliced off the bar like a loaf of bread, saving the customer processing time and money.

Yarde Metals’ vast inventory and its ability to deliver, overnight as a matter of fact, to most of the Northeast are legendary. The company is referred to as the Federal Express of the metals industry. Yarde Metals locations also facilitate prompt service. The Connecticut, Massachusetts, New Jersey, New York and Pennsylvania sites offer next-day delivery up and down the East Coast.

Marketing activity is carried out by a team of inside and outside sales associates, headed by Brad Urban, who feels, along with the Yarde brothers, that there should be parity between the two divisions. Each sales person – inside and outside – is given the responsibility and the reward. The compensation structure is the same, a rarity in this and many industries where the inside sales people are often considered as clerical staff. The emphasis on the importance of inside sales people began with the founder, Craig Yarde.