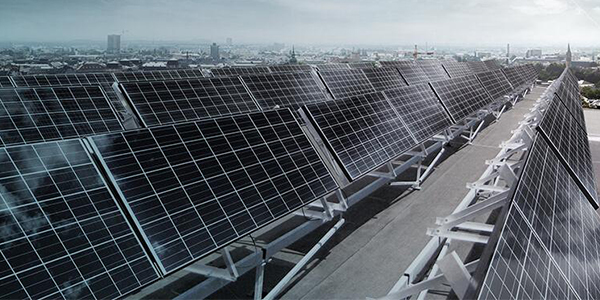 Kyocera Solar, Inc. (KSI), the North American solar-products subsidiary of Kyoto, Japan-based Kyocera Corporation, services thousands of customers in both the developed and developing world. KSI systems make it possible for people around the globe to light their remote homes and villages, achieve radio and telephone service for the first time, and have the power to decontaminate their water supplies and create industries.

From its headquarters in a 65,000 square-foot facility in Scottsdale, Ariz., and regional sales centers on three continents, KSI serves the diverse needs of customers for distributed solar electricity through two major market channels. The company supplies fully integrated system packages to its industrial customers – which include manufacturers, governmental units, utilities, corporate clients and institutions. It also works through a global network of more than 1,500 authorized distributors and dealers, which provides components, packaged systems, engineering and technical support, project management and training.

With thousands of successful installations worldwide, KSI continues to be the leader in the solar electric industry. Its sales totaled about $50 million in its last fiscal year, and the company expects an approximate 20 percent increase in the current year, according to Marketing and Sales Vice President Ron Kenedi.

Advanced from the Start
Kyocera Corporation, KSI’s parent company, has sold and installed more than 19,000 residential grid-tied solar systems. Since its founding in 1959, the company has combined its core competency in advanced materials with other technologies to become a leading producer of solar energy systems, industrial and electronic components, and information and communications equipment including wireless phones, copiers, printers, faxes and cameras.

The corporation recorded consolidated sales of more than $10 billion for the fiscal year ending March 31, 2001. Kyocera has 45,000 employees in more than 40 plants and 100 sales offices worldwide, about 30,000 of which work outside of Japan. The solar business groups provided more than $200 million of the firm’s revenues. Industry Week magazine has recognized the parent as one of the World’s 100 Best-Managed Companies.

The corporation’s name is short for “Kyoto Ceramics,” its initial field of activity. It has since diversified to become a vertically integrated manufacturer in many high-tech fields, employing the advantages of its solid background in advanced materials. Kyocera has steadily invested in solar research and development and in facilities, including a $50 million manufacturing plant expansion in the mid-1990s. In 1998, the company’s consolidated photovoltaic (PV) shipments reached 24.5 megawatts, making it the world’s leading producer, and it has increased this output annually to maintain its No. 1 position.

Before the Golden Genesis acquisition, Kyocera had concentrated its solar energy efforts in the Japanese market, where a program of government incentives had led to the installation of about 6,000 residential solar systems in recent years. In 2000 alone, the company sold 5,400 4-kilowatt home systems. Having developed a widespread network, the company shifted its focus to global power solutions, competing directly with the major petroleum-sourced power providers. “We’re vastly different from them in that we’re a manufacturing company with strong corporate values of environmental concern,” says Kenedi. “This is a very strong philosophy which we impart to our employees.”

Sun Power to the People
KSI literature points out that the sun pours energy onto the earth at the rate of 100 quadrillion kilocalories per hour, enough to equal the world’s energy consumption in an entire year. Its parent company has been researching ways to harness this clean energy since 1975, using multicrystalline silicon solar-cell technology to create more efficient, lower-priced solar cells with larger surface areas and reduced thicknesses. This research is apparently fulfilling the people’s pervasive longing for cheaper and cleaner power. A recent industry publication cites a Washington Post/ABC News poll that found that 90 percent of respondents nationwide supported federal government efforts to develop more solar and wind power.

KSI’s stand-alone PV generation systems store generated electricity to be distributed as needed. In this category, solar power and water pumping are a natural combination since, in general, water is needed most where the sun shines brightest. This “sun-synchronous” situation makes solar power an economical choice over windmills and engine-driven generators for most locations where there is no utility power. Solar pumping systems require no fuel and are low-maintenance.

More than 100,000 families in the United States have chosen solar power for their electric systems. Solar power can be an economical choice for a home more than a third of a mile from utility power. Stand-alone packaged systems provide 120-volt AC electricity for all types of residences, from vacation cabins to large homes.

Other KSI stand-alone solar units provide power for communication, such as KSI’s SunFone and Solaradio, traffic warning systems, railroad telemetry, track circuits and detectors, and cathodic protection devices and data acquisition for the oil and gas industry. Recreational-vehicle and marine solar electric systems are popular items in the recreational market. KSI’s Solar Traveler Kits range from designs for weekenders to those having full-time power needs.

Next Generation
In June 2001, KSI announced the nationwide availability of a full line of standardized rooftop-mounted solar energy systems. Called the Kyocera Solar MyGen (My Generation) system, this product line promises to make solar electricity a practical reality for thousands of everyday home and business owners. Kyocera Solar MyGen converts sunlight into utility-quality AC power, which can be used by a residence or business, or automatically sold to the utility.

During daylight hours, the system’s solar modules generate DC electricity, which is converted to AC by an inverter and fed back into the utility grid, thus enabling the home or business owner to legally “turn the utility meter backward” and significantly lower his/her electric bill. Unlike the owners of stand-alone systems, the MyGen owner remains connected to the utility’s power grid for a stable supply of electricity regardless of sunlight conditions.

The heart of MyGen is a Kyocera solar electric module, which is Underwriters Laboratories-listed and carries a 25-year warranty. The system includes all the necessary components for a quick, code-approved installation on nearly all roof types and styles. Twelve models are now available, ranging from a 400-watt basic system to an 8-kilowatt package for larger homes. The company expects its 2.3-kilowatt AC system to eventually be the most popular. It is designed to offset an estimated 60 to 75 percent of the electricity consumption of the typical single-family home in California.

“Kyocera unveiled the MyGen concept in key markets earlier this year, and the response has been overwhelming,” says Doug Allday, president of KSI. “People are very interested in protecting themselves and their families from present and future rate increases. More important, we believe the power crisis has awakened many consumers to the reality of solar energy as a limitless, environmentally safe alternative.”

MyGen systems are being sold through KSI’s authorized dealers and contractors. For residents of the Golden State, up to 50 percent of the total purchase price is eligible for reimbursement through the California Energy Commission’s Emerging Renewable Buydown program.