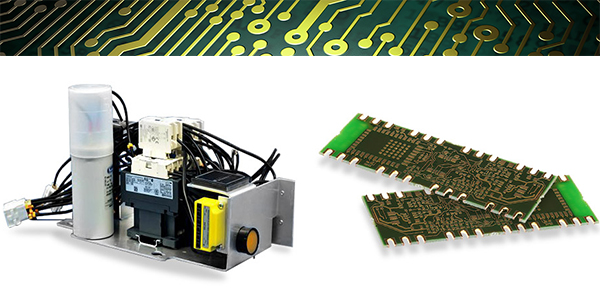 Contract electronic manufacturing was in its infancy in 1971 when B. Hong Mah envisioned its market possibilities as well as the potentially valuable labor force in the Chinatown area of San Francisco. With a stake and a handshake agreement from his former employer, he founded a company that has become a $100 million enterprise with a reputation for uncompromised manufacturing quality.

The LeeMAH story began in 1949 when Mah left his home in Taishan County, Guandong Province in the People’s Republic of China, and journeyed to Hong Kong where he met his future wife Jean Bow Lee. After a brief stay in Hong Kong, Mah, his mother and his brother immigrated to Edmonton, Alberta, where they connected with his father who had left the PRC when Hong was an infant.

Working in his father’s restaurant was hard, and for Mah not very fulfilling, work. The days were long and when they were over, he would frequently write to Jean, who by this time had moved to San Francisco. During the five succeeding years, life for young Mah was pretty uneventful, so he dreamed of better times and wrote lots of letters.

He eventually moved to San Francisco, married Jean, studied electronics and became an engineer for Farinon Electronics. His employer, Bill Farinon, helped Mah start up the contract shop that has grown to be an important provider of services to Fortune 500 companies from its nine manufacturing facilities – including a new 70,000 square-foot plant in Taishan, Mah’s home town.

LeeMAH’s total manufacturing area of 374,000 square feet includes five plants in its headquarters city of San Francisco, one across the bay in Oakland, another in Fremont, Calif., and a plant in Richardson, Texas, that supports telecommunications customers in the Southwest. Except for the recently added Fremont and Richardson facilities, all other LeeMAH facilities are ISO 9002-certified. The Folsom Street plant in San Francisco, dedicated to surface-mount technology (SMT) circuit boards and central office switching rack assembly, is also QS 9000-compliant. The average employee has assembled electronic products for LeeMAH for more than 12 years, an experience level that contributes significantly to the firm’s reputation for innovative solutions and high standards.

No Task Too Complicated
For three decades, LeeMAH has adapted and expanded until it now serves an extensive array of markets including telecommunications, automotive, medical, computer and peripheral products. Its team of experienced professionals can turn out a prototype or a program of full production and testing. Complicated manufacturing tasks, from assembling diagnostic interconnects to providing post-production support for computer peripherals, are LeeMAH specialties. The company’s technical staff aggressively pursues automation and process improvements that have saved customers as much as 30 to 50 percent in production costs.

In its mission statement, the firm cites its determination to provide engineering as well as manufacturing solutions to meet manufacturing challenges, and has devoted two plants to fulfill contracts for a diverse range of system assemblies. These include complex telecommunication racks, card cage assemblies with back-plane installation and control systems. With no minimum quantity levels, LeeMAH’s focus is always on solving assembly requirements with a cost-effective program.

LeeMAH ranks as one of the top electronic manufacturing companies in the United States. It is the leading subcontractor for critical electronic components used by Agilent, Lucent, Texas Instruments, Alcatel USA and a host of other industrial leaders – who have joined in strategic partnership arrangements that provide lower costs, improved planning and on-demand deliveries.

Satisfied and Gratified
Spokesman John Haskins of Hewlett-Packard tells a typical success story: “We were manufacturing over 3,000 assemblies, using a variety of different processes and equipment, with about 300 people and a tight time frame. It had significant implications for our reputation around quality and reliability. LeeMAH was a true strategic partner who not only shared in the responsibility of meeting our goals, but also exceeded our expectations by turning the project around in less time than anticipated and solving some major challenges for us. We commissioned a special commemorative plaque to show our appreciation.”

Linda Duncan of Systron Donner’s Inertial Division in Concord, Calif., praises the can-do attitude of LeeMAH personnel. “We make a quartz rate sensor for the automobile which works with the ABS systems. That means we are in the business of saving lives,” Duncan says. “It made me feel comfortable that the product coming in from LeeMAH was a qualified product. It made me feel proud to be a partner with LeeMAH, to know that from their president down they are willing to work with us. There never was a frown. There never was a ‘Bah! Humbug!’”

Alcatel USA has contracted with LeeMAH for about 20 years because of the full array of services it can provide, says Jeff Clark, a senior buyer for the Richardson, Texas, company. “They’re a full-meal deal,” he said. “They have competitive pricing and their quality is unsurpassable.” LeeMAH is one of only four preferred suppliers on Alcatel’s “A” list.

Besides the two plants dedicated to a wide range of system assemblies, there are four circuit assembly plants in the San Francisco Bay area. These offer complete turnkey services for prototype, production and testing. Assemblies vary from very complex pin-through-hole boards with hundreds of components, to simple designs requiring only a few parts. Surface-mount technologies and ball-grid-array (BGA) assemblies are also available from LeeMAH, whose engineering staff often assists by reviewing customer data to ensure on-time production.

Privately owned LeeMAH generates about 73 percent of its business from the telecommunications and test equipment markets, according to Greg Norwood, vice president of sales. Diversification will be an important goal in the new century, with plans to grow to a $200 million business by 2005, Norwood says. Part of the strategy involves breaking into new markets that may balance sales proportions. For example, Norwood says, the company’s percentage of sales to the automotive sector almost doubled in fiscal 1999, increasing from 3.1 percent to about 6 percent.

One new technology that has been added to the LeeMAH catalog is the production of fiber-optic cables. The company recognizes the great potential of fiber optics in high-speed and long-distance transmission, the advantages of its upgrading capability, immunity to electromagnetic interference, data security, reduction of spark hazards and ease of installation.

Alcatel USA is helping LeeMAH, its preferred supplier, to break into the fiber-optic cable assembly market. Alcatel’s Clark comments on LeeMAH’s latest venture: “If they get through the learning curve and manage to grasp the fiber-optic technology, they’ll do just fine.”

Sales for LeeMAH Electronics fiscal year ending March 31, 2000, were more than $100 million. This is a 76 percent increase over the previous year’s sales total. The dramatic growth was due to strong shipments for automotive, instrumentation and telecommunication customers. A significant contributor to the record-setting year was the LeeMAH operation in Richardson.

Starting from a vacant facility at the beginning of the year, LeeMAH Richardson was able to ramp up its production operations throughout the year to meet an aggressive build schedule. LeeMAH operations in China showed triple-digit growth over the past year. Additional business from Hewlett-Packard and Lucent Technologies pushed shipments to more than $8 million.

Through the first five months of the current fiscal year, LeeMAH’s sales are on track for another sales record of $180 million or more. For Mah, the dream has come true.